With the United States rolling back Obama-era regulations and possibly exiting the Paris climate accord, some analysts are assuming that China will take over its leadership.[i] And, that may be the case. China has nothing to lose. The country pledged to keep increasing its greenhouse gas emissions through 2030 as it continues to grow its economy, and then begin to decrease them. This is widely different from the U.S. pledge to decrease those emissions by 26 to 28 percent by 2025 (from 2005 levels). As a result, China is enjoying increasing its electrification of communities and supplying energy to fuel its economy by using mainly coal-fired electricity. The majority (83 percent) of its growth in electricity demand for the first quarter of 2017 was fueled by thermal energy (mainly coal).[ii] 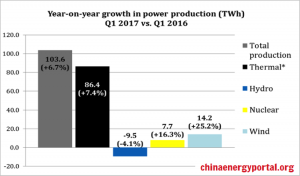 Note: Growth of ‘Other thermal’ includes that of biomass power generation. No statistics for 2016 are currently available, but it was 57.8 terawatt-hours in 2015. 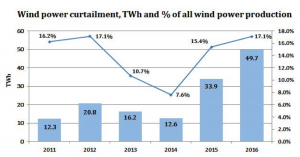 The International Energy Agency in its World Energy Outlook 2016 projects in its “New Policies Scenario” that over the next 35 years, the amount of electricity that China is expected to produce from coal will increase by 4.3 percent while the amount of coal it will use to generate that electricity will decline by 4.6 percent. That is because China is leading the world in constructing the latest super-critical and ultra-super-critical low-emission-coal technology. This technology operates at much higher temperatures and pressures, increasing the efficiency of turning coal into electricity by up to 30 percent, and enabling new-technology power stations to generate more electricity while emitting less carbon dioxide and criteria pollutants (such as particulates, sulfur dioxide, and nitrogen oxides). While former President Obama’s war on coal had the Environmental Protection Agency implementing regulations to decrease the use of coal in the United States, China was and is implementing technology to make its coal-fired power plants more efficient while improving local air quality.[iii]

The Obama administration’s climate negotiators did not put American interests first. In essence, in the Paris accord, those countries that offered the most, like the United States, would end up losing the most. While supporters of the Paris Agreement argue that U.S. withdrawal would put the world’s climate at risk, what the Paris agreement really does is put the future of American families and businesses at a great disadvantage. Meanwhile, China is taking action to grow its economy by continuing to use coal and to invest in the low emission coal technology. The United States should learn from China’s example and invest in that coal technology, as well, putting our miners back to work and ensuring centuries of coal-fired generation to fuel its economy.

[i] The Hill, China can take reins of clean-energy boom should US falter, April 10, 2017, http://thehill.com/blogs/pundits-blog/energy-environment/328132-should-us-falter-china-poised-to-capitalize-on-clean

[iii] National Review, The U.S. Should Abandon the Paris Agreement and Learn from China, December 7, 2016, http://www.nationalreview.com/article/442822/paris-climate-agreement-united-states-clean-power-plan-china-coal-emissions