Oil prices are now averaging $125 a barrel and some believe it will reach $200 a barrel. Current gasoline prices exceed their record high in 2008, averaging $4.25 a gallon. A senior minister in Russia said western countries could face oil prices of over $300 per barrel and the possible closure of the main Russia-Germany gas pipeline if governments cut energy supplies from Russia. Russia’s invasion of Ukraine is ramping up the price of metals used in cars, from aluminum in the bodywork to palladium in catalytic converters to the high-grade nickel in electric vehicle batteries. The London Metal Exchange recently suspended nickel trading and canceled trades after prices doubled to more than $100,000 per metric ton. Russia supplies about 13 percent of the world’s nickel and Russia’s Nornickel is the world’s biggest supplier of battery-grade nickel at 15 to 20 percent of global supply. Aluminum and palladium, which Russia also supplies, both hit record highs this week. A recent forecast by IHS Markit Ltd. predicted that the average price of the lithium-ion battery—the single most expensive component of electric vehicles—would increase 5 percent this year.

The critical metal price increases will increase the cost of automobiles. The average transaction price for a new vehicle in the United States was $44,460 in February, up 18.5 percent from the same month in 2021. German carmakers such as Volkswagen and BMW have already been hit by Russia’s invasion as it has forced makers of wire harnesses in the west of Ukraine to halt production. Ukraine is a key supplier of wire harnesses, which are a set of parts bundled up to 5 km (3.1 miles) of cables in the average car. Ukraine also supplies coal, iron ore and uranium and disruptions are likely. For instance, Arcelor Mittal has ceased operations at underground iron ore mines in Ukraine and slowed down production at Kryvyi Rih’s steel plant. This comes against the backdrop of recent closures of metal production facilities throughout Europe as a consequence of skyrocketing energy prices on account of failures of their increasingly renewable energy generating system.

As shown above, Russia is a major producer and supplier of metals. For example, in 2020, Russia accounted for 44 percent of Germany’s nickel imports, 41 percent of its titanium, a third of its iron, and 18 percent of its palladium. Russia is the world’s fifth-largest producer of iron ore with the production of 108 million metric tons last year and the third-largest producer of aluminum—the most energy-intensive metal to produce—accounting for 6 percent of global output. Russia is the world’s biggest supplier of palladium, accounting for about 40 percent of the global market. Palladium prices have been rising for about six years. For catalytic converters, which are required on cars, there is no other option beyond palladium and platinum.

The Biden administration sees the war in Ukraine as a chief reason to launch a domestic supply chain for batteries. Several Biden officials noted that the Russian invasion underscored the need for U.S.-based battery production, which is the subject of an Energy Department blueprint released in late February. That blueprint envisioned how the United States could begin to build domestic capacity in everything from mining and mineral-processing to battery assembly and recycling of used components. The Energy Department’s framework contained dozens of recommendations for Congress and local policymakers, including a call to create new tax incentives for domestic clean energy manufacturing. According to Energy Secretary Jennifer Granholm, the Russian invasion had “only really deepened” the urgency for a clean energy transition powered by U.S.-made batteries, which are a key component in electric vehicles and grid storage. “The only way to get closer to true energy independence, national security, is by building out the technology at home with a reliable supply chain,” she added.

That’s all well and good. But, the quickest way to be energy independent is not in renewable energy and electric vehicles. It is in oil, natural gas and coal, where the United States was energy independent as recently as 2020. Today, renewable energy including hydroelectricity only provides 12 percent of our energy needs, and that is with federal subsidies and state mandates that have been applied for decades. According to the Energy Information Administration’s latest Annual Energy Outlook, in 2050, these same renewables will only supply about 20 percent of our energy needs. The forecast expects the United States to get 74 percent of its energy requirements from fossil energy in 2050.

As the chart below shows, China is in control of the production of rare earth minerals and the processing of most critical minerals. China has been working on achieving this dominance for decades. It would take that long for the United States to achieve that goal if the Biden administration were serious in doing so. But again, actions are louder than words. Just about 6 weeks ago, at the end of January, President Biden’s Department of the Interior revoked existing federal leases for Twin Metals Minnesota to mine copper, nickel, cobalt, and platinum-group elements in the Superior National Forest. These are minerals needed for the renewable energy and “electrification of everything” the Biden administration envisions in its economic and energy transformation of the United States. 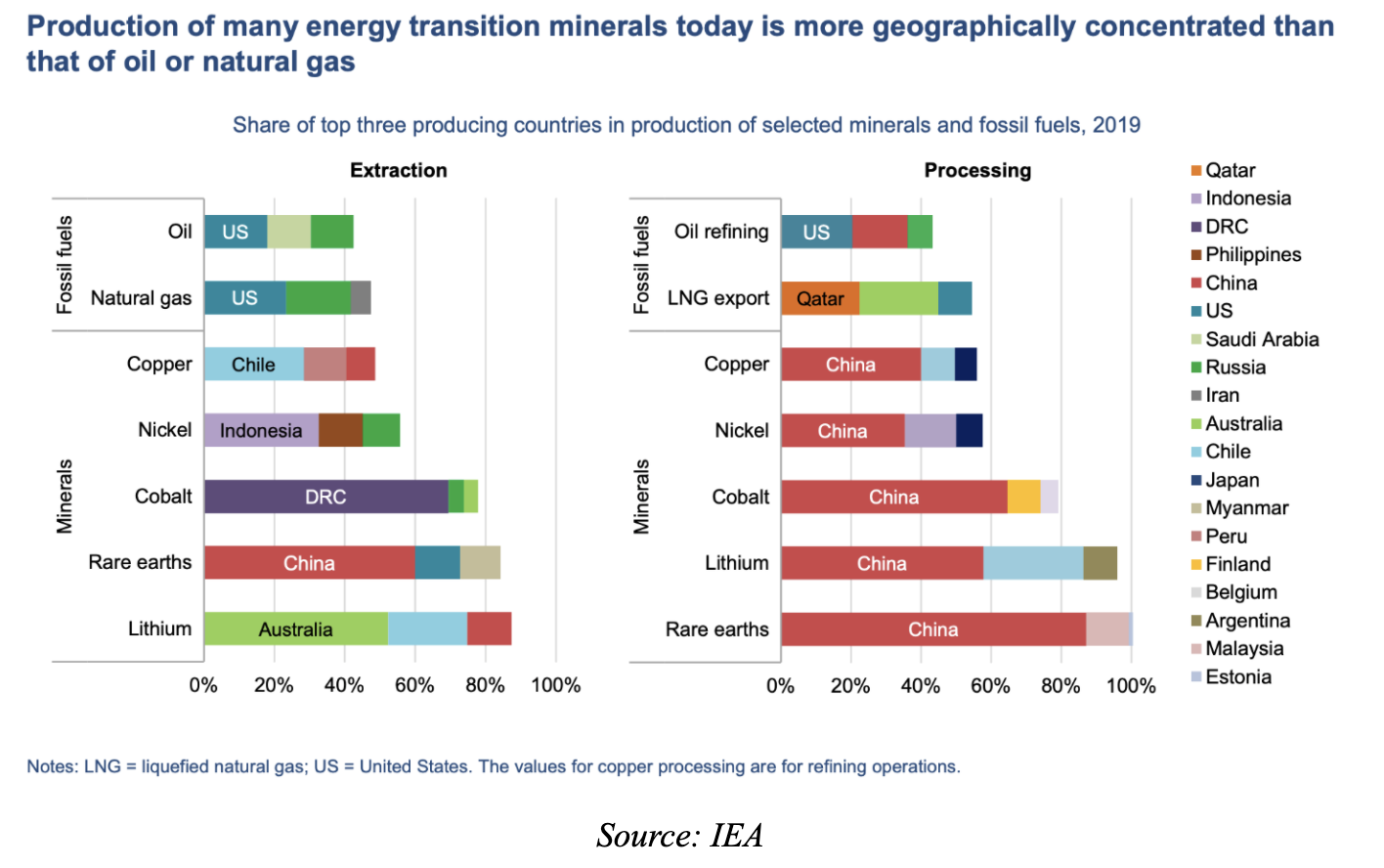 Further, two new copper mines in Arizona are having trouble getting approvals. The Resolution copper mine in Oak Flat, Arizona, which can meet about 25 percent of U.S. copper demand, is currently under federal environmental review. Last year, the House Natural Resources Committee voted to include language in the reconciliation package to block the building of the Resolution copper mine. The Rosemont copper mine in the northern Santa Rita Mountains in Arizona recently received a setback when Federal regulators rejected its mining company’s request to reduce critical habitat for jaguars deemed endangered on land that overlaps the footprint of the proposed mine.

The PolyMet copper and nickel mine, located within Minnesota’s Mesabi Iron Range is being held up by court and regulatory action despite having undergone more than a decade of thorough, public environmental reviews. The Thacker Pass Lithium Mine, located in Humboldt County, Nevada, about 25 miles from the Nevada-Oregon border, could produce a quarter of today’s global lithium demand. While the Bureau of Land Management granted the project its final permit in January 2021, the mine’s development is still on hold, as several permits are in legal challenges.

The Pebble copper, molybdenum and gold mine, 100 miles from Bristol Bay, Alaska had its permit application rejected in November 2020 by the U.S. Army Corps of Engineers. The Pebble mine also contains massive amounts of rare earth and strategic minerals, including palladium and rhenium. In January 2021, the Pebble Partnership requested the Army Corps of Engineers to reverse its denial of the proposed mine’s Clean Water Act dredge and fill permit. According to Northern Dynasty Minerals, the decision is receiving new oversight and is likely to take a year or longer. The Environmental Protection Agency, however, indicated that, depending on the outcome in the courts, it would reopen a proposed veto of the Pebble mine, which, if finalized, would effectively block its development on state-owned lands. That process, started under the Obama administration, culminated in a proposed veto of the mine in 2015, before Pebble had even filed a permit application with the Army Corps of Engineers. The Pebble Mine proposal is adjacent to other prospective rich mineral deposits which could be made economic with the infrastructure the Pebble mine would deploy for development.

The Russian invasion of Ukraine is escalating prices for oil and critical metals, which have been in short supply giving the energy transition that western countries are pushing. The original supply shortage started escalating the prices well before the war, which were exacerbated by the war. Energy and mineral insecurity were “pre-existing conditions” when Putin’s tanks rolled into Ukraine, and may have been a precipitating factor.

President Biden’s Department of Energy wants to facilitate a faster transition to develop a U.S. supply chain for battery production, but China spent decades becoming dominant in that area and the U.S. would need at least the same timeline to develop it. China is not constricted by environmental activists whose activities contributed to European dependency and clearly have the ear of the White House in the Biden administration. The fastest way to energy independence is to unburden our oil and gas industry to allow it to strengthen U.S. energy security so we can again become the world’s leader in these fuels. Otherwise, if nothing changes in the policies of the Biden administration, the United States will become dependent on China for 80 percent of the supply chain for “green energy”—4 times the dependence it had on the Middle East in 2001.

The Plugged In Podcast #83: Tom Pyle on Electric Vehicles and Energy Prices

Despite Crisis, Biden’s Agenda Against U.S. Oil and Gas Continues