When Vermont Yankee was set to close, activists such as Bill McKibben claimed that Vermont “is completely capable of replacing (and far more) its power output with renewables, which is why my roof is covered with solar panels.”[i] This isn’t what happened. Instead, natural gas generation expanded in New England. As a result, carbon dioxide emissions increased 7 percent in 2015.

Vermont Yankee, a 604-megawatt nuclear plant, provided New England with 42 years of reliable, carbon dioxide-free power before its closure at the end of 2014. The plant’s capacity factor exceeded 80 percent over its lifetime—more than double the capacity factor of the most efficient solar or wind plant in the United States, which were expected by some to replace it. But, in reality wind and solar power cannot replace the generation from Vermont Yankee, because a nuclear plant can operate 24/7 and is not dependent on the wind blowing or the sun shining. As a result, natural gas generation increased in New England by 5.5 percentage points (from 43.1 percent of generation in 2014 to 48.6 percent of generation in 2015)[ii], and with it, carbon dioxide emissions. Carbon dioxide emissions increased in New England by about 7 percent in 2015, increasing from 28 million tons to 30 million tons, according to data from EPA.[iii] (See chart below.) 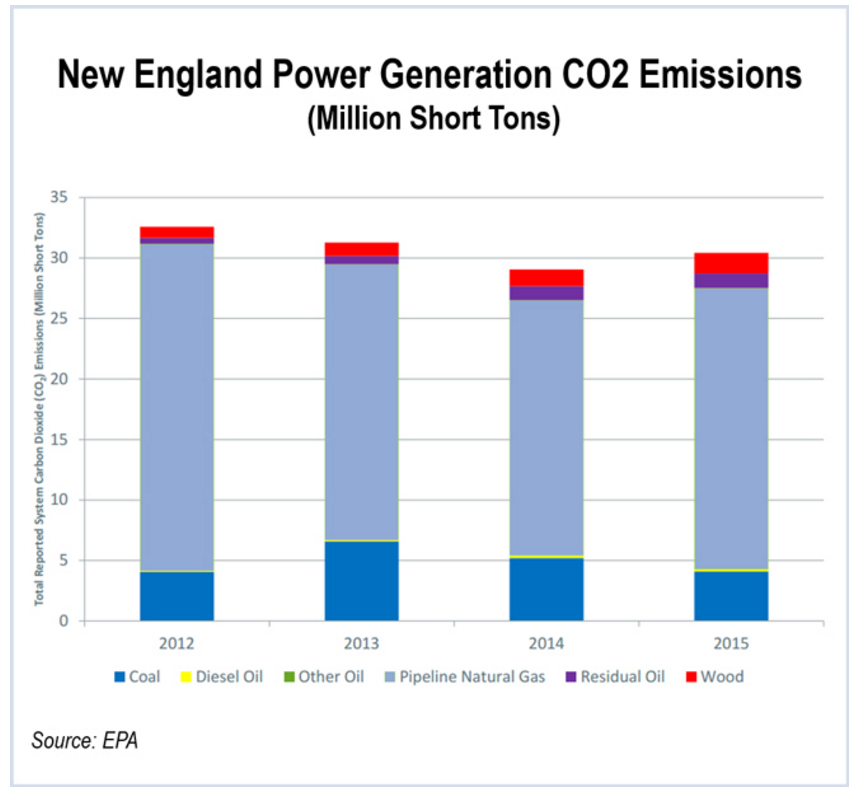 This increase is despite the Regional Greenhouse Gas Initiative (RGGI)—an agreement among nine states (Connecticut, Delaware, Maine, Maryland, Massachusetts, New Hampshire, New York, Rhode Island and Vermont) to reduce greenhouse gas emissions. RGGI is a cap and trade system where the greenhouse gas emissions from these states are capped and emission allowances can be purchased if an entity has problems meeting its cap.

Nuclear Generation in New England—Pilgrim on the Chopping Block

While natural gas and wood generation in New England increased their share in 2015, nuclear generation declined from a 34 percent share in 2014 to a 29.5 percent share in 2015. That share will decline further as Entergy is planning to shutter its Pilgrim nuclear plant in Massachusetts by mid-2019 despite having its license renewed 3 years ago, allowing it to operate until 2032. New England will then have only three nuclear generators–the Seabrook plant in New Hampshire and the two-unit Millstone plant in Connecticut.[iv]

Pilgrim, a 680-megawatt nuclear plant operating for 43 years, employs over 600 people with an annual payroll of $55 million, and pays nearly $10 million in town and state taxes, providing power for more than 500,000 homes. Entergy has a fund to decommission the plant totaling $870 million, but believes that amount is $240 million more than it needs to comply with Nuclear Regulatory Commission (NRC) standards for shutting down the plant and storing radioactive waste. [v]

Entergy is decommissioning the plant because it expects Pilgrim to lose $10 million to $30 million-a-year through 2017 because of low-cost, gas-fired electric power that is depressing wholesale market prices and because of regulatory expenses. The NRC is forcing Entergy to invest at least $45 million to $60 million to upgrade Pilgrim to respond to a recent NRC safety downgrade of the plant–an expense that could make Pilgrim “not economically viable.” So, Entergy decided to close it.

The retirement of the Pilgrim nuclear plant will likely lead to greater reliance on natural gas in New England, increasing carbon dioxide emissions and putting more pressure on natural gas pipelines already facing bottlenecks. The Independent System Operator (ISO) in New England cautioned that “Pilgrim’s closing will undermine the region’s diversity of fuel sources and could make it harder for power plants in the coldest months to deliver power in the quantity and at prices expected by consumers.”

According to the ISO-New England, New England is expected to retire about 4,200 megawatts of oil, coal, and nuclear plants by June 2019, replacing them with 11,000 megawatts of proposed new power sources–two-thirds using natural gas and the rest mainly using wind to generate electricity. New England also expects to import more hydroelectric capacity from Quebec and expand the capacity of pipelines to bring more natural gas to the state.

The closure of Pilgrim will likely make it significantly harder to meet Massachusetts’ goals of cutting its carbon dioxide emissions 25 percent below 1990 levels by 2020 and 80 percent below by 2050.[vi]

Carbon dioxide emissions are increasing as New England is shuttering its non-carbon dioxide-emitting nuclear plants due to competition from natural gas generation and regulation by the NRC. Despite environmentalists wanting wind and solar power to replace the shuttered nuclear power plants, the reality is that intermittent technologies (wind and solar) cannot replace plants that can operate 24/7. Natural gas will provide most of the replacement power, increasing carbon dioxide emissions. If the state intends to meet its greenhouse gas reduction goals, it will most likely have to rely on RGGI, which did not seem to provide the necessary reductions when Vermont Yankee was shuttered.