As the former CEO of Recreational Equipment, Inc. (REI), Secretary of Interior Sally Jewell would seem like the last person to take actions that will likely lead to restrictions on recreation on public lands, but she has done just that. By imposing a moratorium on new coal leasing, she has set in motion a regulatory and legal cascade that will not stop with coal, and will likely lead to restrictions on natural gas and oil leasing—even recreation. The problem is Secretary Jewell’s logic for imposing the coal-leasing moratorium. She imposed the moratorium to make sure the leasing program “takes into account [coal’s] impacts on climate change.” This justification applies to coal, but also to natural gas and oil production, and even to recreation on public lands. All of them are related to the generation of carbon dioxide.

President Obama telegraphed his plan to impose the coal lease moratorium during January’s State of the Union Address. He stated, “that’s why I’m going to push to change the way we manage our oil and coal resources, so that they better reflect the costs they impose on taxpayers and our planet.” Two days later, Secretary Jewell announced a moratorium on new coal leasing “to ensure the federal coal program delivers a fair return to American taxpayers and takes into account its impacts on climate change.”

It is obvious from the timing of Sec. Jewell’s actions, just after the State of the Union, that the key reason for the moratorium is the climate considerations of using coal. But once the Secretary starts halting activities on federal lands because of climate change considerations, where does that end?

The administration may claim that they do not want to impose a moratorium on natural gas and oil production, but environmental groups will likely petition and pressure the administration to do so, arguing that because they took steps to halt new coal leasing because of climate change impacts, they should do the same for natural gas and oil leasing.

These petitions, however, will not be needed if Hillary Clinton is elected President. She has already announced ending natural gas, oil, and coal production on federal lands is “a done deal.” And Senator Bernie Sanders has sponsored a bill to “keep it in the ground” when it comes to oil, gas and coal on federal lands.

All Parks of the National Park System

The administration and their environmental activist allies have to be concerned about the climate change impacts of these visits. For example, the vast majority of visits to the Blue Ridge Parkway involve some carbon dioxide emissions. It is obvious that not all visits produce carbon dioxide emissions, since some people will walk or bike along the Parkway. But even biking or walking can necessitate carbon dioxide emissions. For example, the last time I rode my bike on the Blue Ridge Parkway, it was after I drove 130 miles from Northern Virginia. And there is no walking on the Baltimore Washington Parkway, which is a 29 mile highway linking Baltimore with Washington, D.C.

There is a similar story to tell of carbon dioxide emissions induced by visits to the National Parks. Here are the top ten National Parks by visitation in 2015:

Great Smoky National Park, Olympic National Park, and Yosemite are the closest parks to large cities, but otherwise these parks are far from cities. As a result, people travel long distances and use a lot of gasoline to reach these parks. Not only that, but the natural wonders in these parks attract visitors from all over the world. For example, the National Park Service reports that for Yosemite during the summer, “25% of visitors were international visitors. Of those, 14% were from the United Kingdom, 13% from Germany, and small proportions from 31 other countries.” International aviation is a large emitter of carbon dioxide.

Even those who use federal lands for backcountry recreation such as backpacking or cross-country skiing almost always drive an SUV, truck, or car to the wilderness boundary and then start hiking or skiing from there. 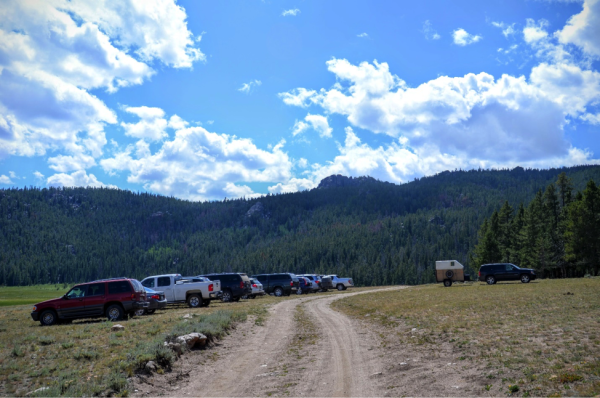 Ski resorts induce large amounts of carbon dioxide emissions; not only from skiers and snowboarders driving their cars and trucks to the resorts, but also from the ski lifts, which require a lot of energy to operate, and, in some areas, the making of artificial snow, which uses a lot of energy pumping the water up the slopes to where it is needed. In making artificial snow, huge air compressors combine with large fans and lots of water to make snow—requiring a lot of energy. In fact, energy costs are typically the second highest expense for ski resorts, after labor.

Some activists are pushing the snow sports community to support the coal moratorium, but this would be the equivalent of cutting off your nose to spite your face. According to President Obama and Secretary Jewell, coal is being targeted because of carbon dioxide emissions. In reducing carbon dioxide emissions, there is no reason to stop at carbon dioxide emissions from the use of coal, natural gas, and oil. If President Obama and Secretary Jewell are not concerned about the fact that people are going to lose their livelihoods as a result of stopping coal leasing, they certainly shouldn’t have any problem disrupting leisure activities by those who have the money to travel far distances just for fun.

The administration believes that any carbon dioxide emission reduction is good, no matter how small the climate impact is. Recently Administrator Gina McCarthy was asked about the climate impacts of Canadian oil sands. She remarked:

We don’t have to prove that any reduction will actually make a precipitous difference in and of itself, but we have to admit that there is a lot of efforts need to be done to get at this issue, and it is that combined effort. But, every step, the first step–this is a marathon, and if you don’t take the first step, you ain’t getting nowhere baby.

Given the actual policies implemented by the administration and McCarthy’s comments, for the Obama administration, what matters is that carbon dioxide emissions are reduced. The actual amount reduced or the impact on climate are of little concern.

In the run up to Paris, the Obama administration pledged to other countries that it would reduce carbon dioxide emissions. This pledge, in the parlance of global climate negotiations, is called an Intended Nationally Determined Contribution (INDC).

By imposing a moratorium on new coal leases because of carbon dioxide emissions, the Obama administration has set in motion a plan that will logically lead to restrictions on recreation on public lands. Recreation on public lands involves large amounts of carbon dioxide emissions. People fly and drive to visit these beautiful public lands. This flying and driving results in carbon dioxide emissions that only happen because of recreation on federal lands. People cannot get to these areas without consuming huge amounts of energy, which in turn results in more carbon dioxide. The Obama administration or a potential Clinton administration, if they follow the logic of the coal moratorium—and are honest—will likely impose restrictions on recreation in the name of climate change. If they are willing to impose regulations that cause people to lose their jobs in order to reduce carbon emissions and “save the planet,” surely they would be willing to cut back on people’s fun and recreation to reach their goal.