Between now and 2020, due to existing nuclear power plant retirements and few new nuclear units coming on line to replace them, nuclear’s contribution to the U.S. energy mix is likely to shrink, which will have consequences for consumer energy prices and for the government’s efforts to reduce greenhouse gas emissions. Retiring fully depreciated power plants that still have many years of potential operating life and replacing them with new generating technologies will increase the cost of electricity in the areas where these plants have operated.  Nuclear production costs for existing plants in 2012 averaged 2.4 cents per kilowatt hour, about one-third the cost of a new natural-gas fired plant and about one-fourth the cost of a new onshore wind unit.

A few years ago, it was assumed that most existing nuclear plants would easily obtain 20- or 30-year license extensions from the Nuclear Regulatory Commission (NRC), which would carry the bulk of the fleet into the 2040s and beyond. And, it was anticipated that some new nuclear plant construction would add new nuclear capacity. However, extremely long and uncertain reviews by the NRC have resulted in early retirements rather than life extensions. And, low or flat electricity demand and low natural gas prices resulting from the shale gas revolution made the economics of new nuclear power tenuous to the point where some operators have even canceled relatively low-cost “uprate” projects that would increase capacity at existing plants.

On June 7, Southern California Edison announced that it would  permanently retire units 2 and 3 of the San Onofre Nuclear Plant near San Diego. The utility had installed new steam generators in both units: two new steam generators were installed in Unit 2 in 2009 and in Unit 3 in 2010. However, in January 2012, a small leak was discovered inside one of the new steam generators in Unit 3, which was shut down for repairs. Earlier in January, unit 2 was shut down for a planned routine outage. In October 2012, the utility submitted plans to the Nuclear Regulatory Commission (NRC) to restart Unit 2 at reduced power. From October 2012 until June 2013, when Southern California Edison made the decision to retire these units, the NRC has been reviewing the company’s plan to restart unit 2 with continued uncertainty regarding a restart date.  Because additional administrative processes and appeals could result in delay of more than a year and because the costs of maintaining the units in a state of readiness to restart and the costs to replace the power they previously provided would continue, the utility felt it was best to retire them.  The company felt that it was uneconomic for its customers to bear the long-term repair costs for returning the plant to full power operation without being assured that they could restart Unit 2. Regulatory uncertainty in large capital intensive projects such as electrical generation is often the “kiss of death.”

Since January 2012, Southern California Edison had to replace its low-cost nuclear power with higher cost power purchases. The grid operator for most of California, California Independent System Operator (CAISO), noted in its Summer Loads and Resources Assessment that 2,502 megawatts of capacity were added since June 2012, with an additional 891 megawatts to come online by June 1, 2013. The new capacity in lieu of the low-cost nuclear power raised wholesale electricity prices in the state. It is expected that increasing natural gas prices would increase prices more in 2013. In its annual report, CAISO noted that 2012 wholesale power prices were higher than prices in the previous three years. Further, the spread in wholesale electricity prices between the northern and southern portions of California noted in the graph below also is indicative of system congestion owing to replacement power efforts. 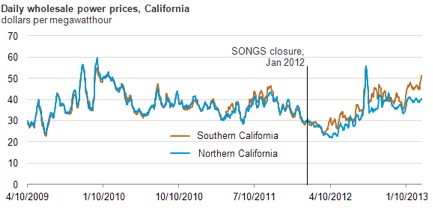 If these nuclear units were replaced by a mix of 71 percent gas-fired generating technology and 29 percent renewable technology, as was added from June 2012 to April 2013 in California, an extra 4 million metric tons of carbon dioxide would be emitted per year, equivalent to 8 percent of California’s 2010 emissions from its electric power sector. If gas filled the entire void, the additional carbon dioxide emissions would be about 6 million metric tons, equivalent to the annual emissions from about 1.5 million cars.

A month earlier, on May 7, Dominion Resources retired the Kewaunee Power Station in Wisconsin, about 35 miles southeast of Green Bay on Lake Michigan, because the company was unable to establish a Midwestern nuclear fleet to take advantages of economies of scale and Kewaunee’s power purchase agreements were ending at a time of projected low wholesale electricity prices in the region. Kewaunee went into service on June 16, 1974 and generated about 148 million megawatt-hours of electricity during its life. Kewaunee was licensed to operate through 2033, but Dominion Resources announced its intention to decommission it last fall. Because Kewaunee is operated as an independent power producer or merchant generator, the costs associated with operating the plant cannot be recovered through regulated cost-of-service rates.

On February 5, Progress Energy, a subsidiary of Duke Energy announced plans to retire Crystal River Unit 3 in Citrus County, Florida–a unit that has been shut down since late 2009. Crystal River Unit 3 was licensed to operate through 2016, and an application to extend the operating life of the unit to 2036 was under review by the NRC. Crystal River Unit 3 was shut down in September 2009 to refuel and to replace its steam generators, but during the shutdown, workers discovered a crack to the concrete wall of the containment building, and additional cracks resulted in 2011 during its repairs. While a 2012 report indicated that the containment vessel could be repaired, the uncertainty surrounding the cost and timing of the needed repairs led Progress Energy to retire the unit. There are 4 coal-fired units at Crystal River that will continue to operate, but it is expected that the two older coal-fired plants (units 1 and 2) will be retired between 2015 and 2018 due to federal regulations requiring additional environmental equipment.

On August 27, Entergy announced the pending closure of the Vermont Yankee plant, which is expected in the fourth quarter of 2014, when the plant’s current fuel cycle ends. The closure of the 41-year-old nuclear plant is expected to affect natural gas and electricity markets throughout New England because the plant had been generating about 4 percent of New England’s electricity supply and about three-quarters of Vermont’s power. Entergy cited a number of financial factors for the retirement including low wholesale electricity prices, driven in part by lower natural gas prices, which have reduced the profitability of the plant; increasing capital costs for maintaining the unit; low prices in the regional market for electric generating capacity; and increased costs to comply with new federal and regional regulations. Because Vermont Yankee, like Kewaunee, is operated as a merchant generator, its costs cannot be recovered through regulated cost-of-service rates. [i]

New England expects more than 1,369 megawatts of generating capacity to be retired between 2013 and 2016 that includes the Vermont Yankee plant. Dominion Energy Resources is planning to retire the nearly 750-megawatt Salem Harbor coal- and petroleum-fired power plant in Massachusetts in 2014 due to the costs of compliance with new environmental regulations and declining profits for coal-fired units in Independent System Operator of New England. To keep operating its coal-fired power plants, the company would have had to spend millions of dollars on environmental equipment to comply with new regulations from the Environmental Protection Agency.

Exelon, the nation’s largest nuclear operator, planned to invest $2.3 billion in its existing reactors (the LaSalle nuclear plant in Illinois and the Limerick nuclear plant in Pennsylvania) and raise their generating capacity by a combined 1,300 megawatts, about the size of one new reactor. But after completing about a quarter of the plan, it found the economics to no longer be favorable and dropped the plan, paying its suppliers $100 million in penalties for the cancellation.[ii]

A gap of more than 30 years in new nuclear plant construction ended this year, with four units, two twin-reactor installations, breaking ground and a fifth unit being revived at the Tennessee Valley Authority. The combined capacity of the 5 units is more than 5,600 megawatts. Tennessee Valley Authority’s Watts Bar 2 is expected to be completed in 2015 and add almost 1,200 megawatts of new nuclear capacity. The NRC issued combined operating licenses for four new nuclear reactors in 2012 at two plants:  Vogtle, units 3 and 4 in Georgia, and Virgil C. Summer, units 2 and 3 in South Carolina. The four reactors have a total capacity of almost 4,500 megawatts and have target dates for completion between 2016 and 2018.

When the Nuclear Regulatory Commission began routinely authorizing reactors to run 20 years beyond their initial 40-year licenses, people in the electricity business thought that 60 was the new 40. But, that precedent has not become the new norm, and instead 5 existing nuclear units are being shut down by the end of next year, bringing the number of nuclear units in the United States to 99. Unfortunately, this may be the fate of many other nuclear units as well. There are a total of 38 possible units on a retirement list because they exhibit a number of risk factors, including competition from lower-cost energy sources, declining demand, safety retrofit expenses, repairs and rising operating costs.[iii] To replace these units will mean higher energy prices and greater greenhouse gas emissions because at least some natural gas-fired technologies will be used either outright or to back-up intermittent renewable technologies such as wind and solar power.

Nuclear energy currently generates 19 percent of our nation’s electricity. If all 38 units at risk were prematurely retired, about one-third of our nuclear fleet would be shut down and replaced with renewable and natural-gas generating technologies.  Electricity prices would eventually increase as natural gas prices increase and as subsidies that mask the true cost of renewable energy are phased out. Greenhouse gas emissions will also increase as natural gas capacity either partially or entirely replaces the retiring nuclear capacity. If the NRC showed more certainty in providing life extensions to existing nuclear units, nuclear plant operators would more likely be willing to spend the capital for needed repairs since the cost would be spread over 20 plus years.

Why is EPA avoiding the people most affected by coal regulations?