Vermont Yankee is a 604-megawatt nuclear power plant that provided 42 years of reliable electricity to New England’s electric consumers with stable fuel costs and no air pollution during operations. Over its lifetime, Vermont Yankee produced over 171 billion kilowatt-hours of electricity, providing 71.8 percent of the electricity generated in Vermont and 35 percent of the electricity consumed in the state. The plant’s capacity factor  also exceeded 80 percent over its lifetime – more than double the capacity factor of the most efficient solar or wind plant in the United States. The plant’s final operating cycle, which ended on December 29, 2014, was the culmination of 633 days and nights of continuous operation.[i]

One should be asking, “What necessitates the demise of such a workhorse of electricity generation?” The plant’s operators indicated that economic factors, particularly related to the natural gas market in the Northeast, were the primary reason for the plant’s shutdown. Vermont Yankee is a merchant nuclear power plant operating in a state that is deregulated regarding electricity generation. Vermont Yankee could not compete against low-cost natural gas power plants, despite the lack of natural gas infrastructure.

Insufficient pipeline capacity in New England is the cause for the spiking of electricity prices in the winter, as the area is unable to supply the needed gas. Under a regulated electricity generation market, regulators may have been able to keep Vermont Yankee operating, recognizing the need for diverse sources of reliable electricity supply. Natural gas now supplies over 50 percent of New England’s electricity, and its share is growing as nuclear and coal-fired power plants are being shuttered.

Entergy, the owner of Vermont Yankee, announced in August of 2013 that it would be closing the plant at the end of 2014 due to a number of financial factors, including low wholesale electricity prices that have reduced the profitability of the plant; the need to invest in significant capital costs to maintain the unit; and low prices in the regional market for electric generating capacity, which provides revenue to plant owners in addition to their revenues from electricity sales. Vermont Yankee is an independent power producer (merchant plant), and as such, the costs associated with its operation and maintenance cannot be recovered through regulated cost-of-service rates. Low natural gas prices have resulted in low wholesale electricity prices, and have made natural gas the major supplier of electricity in New England – despite its other uses.[ii] 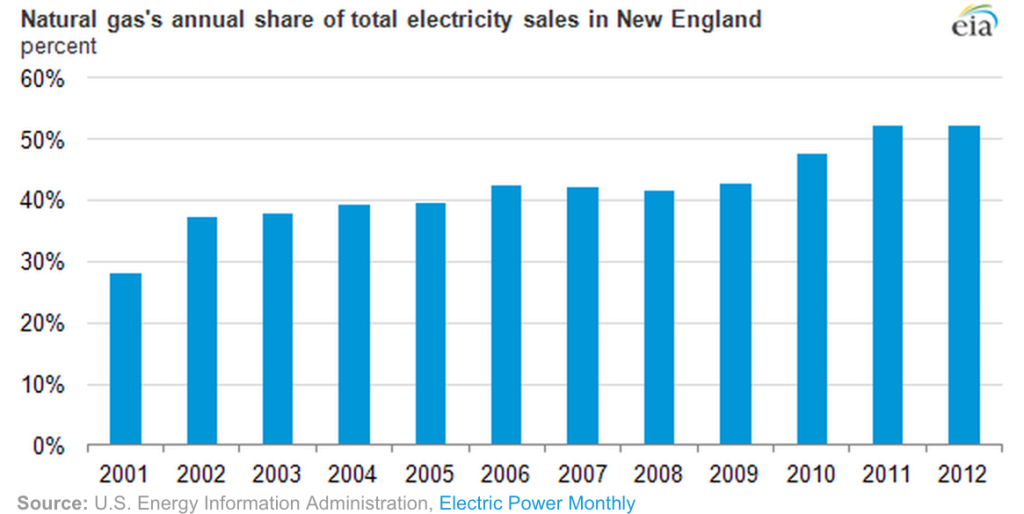 Despite the economic issues noted in operating the plant, Mr. Skibniowsky, the head of the town’s planning commission, said, “I fully expected that we would continue operating for another 20 years. The plant was well maintained. It was in good condition.”[iii]

Steps to Shutter the Plant

The cost to decommission Vermont Yankee is estimated at $1.2 billion. Because its trust fund has only about half of that amount, the full dismantling of the plant will not begin for decades. In the meantime, its operators will cool, store, and secure its spent fuel onsite. Despite federal law requiring the government to develop a long-term storage facility for nuclear waste, the Obama Administration’s lack of funding for Yucca Mountain means that there is no active plan.

The Donahue Institute, at the University of Massachusetts, estimated that the plant contributed almost $500 million to the regional economy in 2014, and as the plant is decommissioned, its economic contribution will fall to $13 million after 2020, and continue to drop thereafter. The plant currently employs 550 workers. Later this month, once the plant has all of the fuel removed from its reactor, employment will fall to 316. By April 2016, after the fuel has had time to cool, employment will be at 127. When the spent fuel pool is shut down around 2020, employment will fall to about 50 security personnel that are needed to monitor dry cask storage.[iv]

Due to the economic loss from the plant’s shuttering, the town was forced to cut about $500,000 from its budget, eliminating its police department and contracting with the county sheriff. 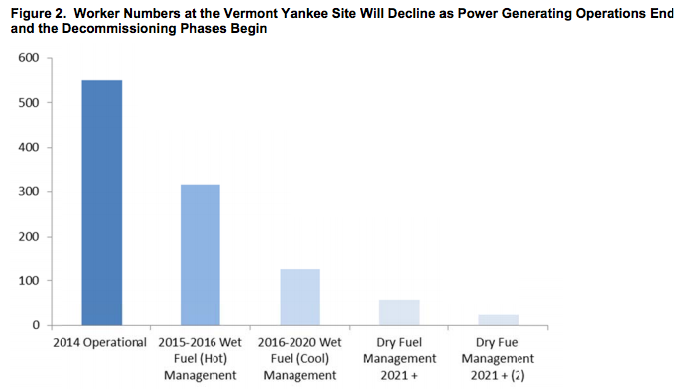 The closure of Vermont Yankee will have a major impact on a three state region and the hundreds of affected employees located there. Furthermore, the closing of this low-cost, well-run, environmentally-benign facility that produced reliable electricity will most likely result in further electricity price spikes to consumers, as the demand for natural gas competes against residential heating needs, electricity generation, and manufacturing in a pipeline-constrained environment. As nuclear and coal-powered plants are shuttered in New England, the region will become even more reliant on natural gas for electricity generation. While the shale gas renaissance has produced sustained low natural gas prices and low wholesale energy prices, prudent management means that diversity of supply issues must also be considered. Without that management, the low energy and capacity prices in the Northeast have made it difficult to provide adequate compensation to merchant nuclear power plants. And despite these plants’ fuel diversity and reliability benefits, New England consumers will likely suffer from inadequate electricity generation and/or continuing spiking of electricity prices.