Despite much lower oil prices at the end of 2014, Exxon Mobil’s forecast for the global energy supply and demand picture through 2040 is very similar to its forecast last year.[i] It sees energy demand growing by 35 percent to fulfill the needs of 2 billion more inhabitants consuming energy worldwide by 2040. It expects carbon-based fuels to meet about 75 percent of global energy demand through 2040. It also expects that oil and natural gas will be the two most prominent global fuels in 2040 with oil maintaining its number one ranking and natural gas surpassing coal for the second position. Combined, these two fuels are expected to provide 60 percent of global energy demand in 2040.[ii]

Exxon expects wind, solar and biofuels to be the fastest-growing energy sources, increasing on average about 6 percent a year, but the company expects these sources to contribute only a small amount to total demand (4 percent in 2040).[iii] That is because of the high cost of wind and solar power and their inability to produce energy on demand. Exxon expects all renewables, including hydroelectric power, to account for 15 percent of energy demand in 2040 and nuclear power’s contribution to double. Despite efficiency gains and the increase in nuclear power and renewable energy, Exxon expects carbon dioxide emissions to be 20 percent higher in 2040 due to a 50 percent increase in these emissions in the developing nations as they bring electricity, schools, and hospitals to more of their citizens.

Global energy demand is expected to increase by 35 percent by 2040–less than half the growth rate during the previous 30-year period from 1980 to 2010 due to efficiency gains. Without these efficiency gains that Exxon assumes, energy demand from 2010 to 2040 would increase 140 percent instead of just 35 percent. China and India combine to account for half the expected 35-percent growth in global energy demand because these two developing economies are expected to lead the world in population and increased living standards. Exxon expects an additional group of 10 Key Growth countries to represent an increasingly significant share of the global energy market due to their increasing population and living standards. This geographically diverse group consists of Brazil, Mexico, South Africa, Nigeria, Egypt, Turkey, Saudi Arabia, Iran, Thailand and Indonesia. Note that Exxon puts Mexico and Turkey in this category, taking them out of the group of countries that comprise the Organization of Economic Cooperation and Development (OECD), which represent the developed economies.

Exxon expects global GDP to increase by about 140 percent; the fastest growth is expected to occur in China, India and the Key Growth economies. By 2040, per capita GDP in China is expected to be four times higher than in 2010; in India, three times higher; and in the Key Growth economies, 1-2 times higher. The higher standards of living for billions of people results in a fast-growing middle class in many developing countries, which increases energy demand.

Despite the large increase in personal vehicles in Exxon’s forecast, Exxon expects the major growth in transportation demand to come from commercial activity–from air travel to shipments by boat, train, or truck of raw materials, building supplies, food products, appliances, and other consumer goods. Global energy demand for transportation is projected to increase by 40 percent from 2010 to 2040, differing widely in amount by country.

The expected expansion of the world’s middle class and other factors like population growth result in a large increase in the world’s light-duty vehicles, which are expected to more than double, from approximately 825 million in 2010 to about 1.7 billion in 2040–more than a 100 percent increase. Because cars are expected to become more fuel-efficient, global energy demand for light-duty vehicles is expected to change very little–the only major transportation subsector in which energy demand is not expected to increase significantly through 2040.

By 2040, China’s light-duty vehicle fleet is expected to be about 400 million (40 percent larger than the U.S. fleet) and almost 7 times as large as its fleet in 2010. However, even by 2040, China will likely have only about 30 cars for every 100 people, compared to about 80 cars per 100 people in the United States and about 40 per 100 in South Korea. Exxon expects vehicle growth in China and other countries, including India, to be somewhat limited by relatively high population density and government policies that encourage public transportation. 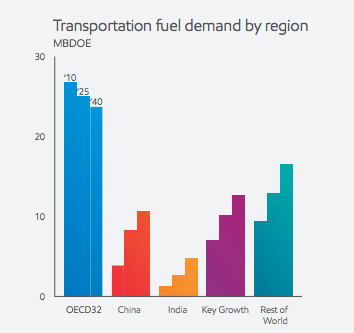 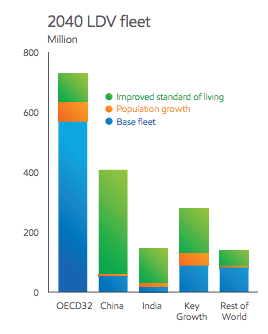 Exxon expects fuel economy of the average vehicle on the world’s roads to be 45 miles per gallon in 2040, compared to about 25 mpg in 2010 due mainly to improvements to the fuel economy of conventional gasoline and diesel vehicles, which are already benefitting from advances such as boosted — turbocharged — technologies and improved transmission systems. In the United States, these boosted vehicles are entering the new-car market far more rapidly than hybrids because of their cost/benefit advantages. Hybrid vehicles are projected to grow from 1 percent of new-car sales in 2010 to almost 50 percent of sales by 2040, making up about one-third of the global fleet. Hybrid vehicles provide about a 30 percent fuel economy benefit compared to conventional gasoline cars and are expected to become cost-competitive by 2025.

Plug-in hybrid and full electric cars are expected to make modest gains, but penetration remains very low due to their high cost and functional constraints compared to alternatives. Even though battery costs are likely to fall in coming decades, electric vehicles will continue to face significant challenges as other alternatives also improve. Exxon expects electric vehicles to account for only about 5 percent of the global fleet in 2040. Energy demand for light-duty vehicles is expected to increase by only about 10 percent between 2010 and 2025, and then to decline about 5 percent to 2040. 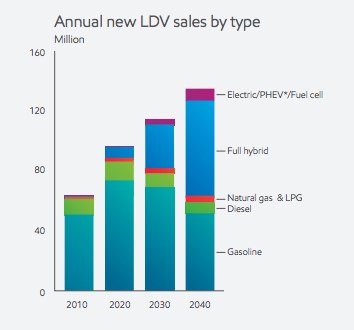 While energy demand in the residential sector is projected to grow by more than 20 percent by 2040, that growth would have been closer to 50 percent were it not for projected gains in residential energy efficiency and the increasing share of developing country households. Efficiency gains due to improved building codes, more efficient appliances and the use of more efficient energy sources in developing countries are expected to lead to a 20 percent improvement in average per-household energy use over the forecast period. Due to improved household efficiency, North America and Europe’s residential energy demand decrease through 2040.

Industrial energy demand is projected to increase by about 40 percent through 2040. Heavy industry and chemicals are expected to account for about 85 percent of this growth. Industrial activity is prominent in areas with access to affordable labor, raw materials, energy, capital, and a growing demand for goods. Since 1990, China has dominated industrial growth as its demand for steel, cement and manufactured products grew rapidly along with its urban population and economy. Over the next 25 years, Exxon expects industrial energy demand growth to shift toward the rest of the developing world as China’s economy matures—particularly to India, Brazil and Saudi Arabia. Between 2010 and 2040, the share of industrial energy demand of India and the Key Growth countries is expected to exceed China’s share, increasing from 20 percent to about 30 percent.

Exxon expects China’s economy to continue to expand, but with a greater proportion of services and technologically advanced light manufacturing, and less heavy industry. China’s industrial energy demand is projected to peak during the forecast period and, by 2040, decline to a level only modestly higher than in 2013. In the developed countries, industrial energy demand is expected to grow slightly by 2025, as the United States and Canada see an increase in manufacturing and chemicals due to growth in production of unconventional oil and natural gas. 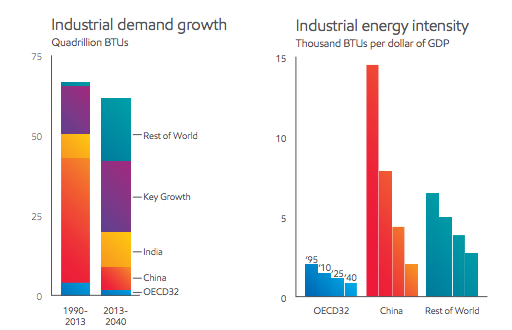 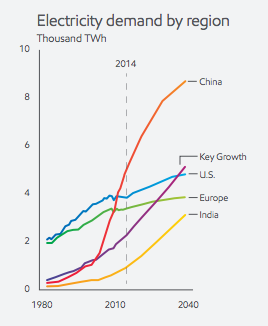 Exxon expects coal’s share of global electricity generation to decline from 40 percent in 2010 to about 25 percent in 2040 as the mix of generation sources changes. The largest increases are expected to be in natural gas and nuclear power and renewable generation from wind and solar. By 2040, natural gas, nuclear and renewables are expected to produce more than 70 percent of the world’s electricity.

Although wind and solar each are expected to exceed global nuclear capacity by 2040, their electricity generated will be much less than that of nuclear power because of the difference in capacity factors. Nuclear power can generate electricity about 80 to 85 percent of the time, while wind and solar, however, have capacity utilization rates significantly lower because they are intermittent sources. Therefore, additional generating capacity, such as natural gas-fired plants, must back up wind and solar during the times when the sun is not shining and the wind is not blowing. The need for back-up power that is not needed all the time adds to the cost of electricity to consumers. 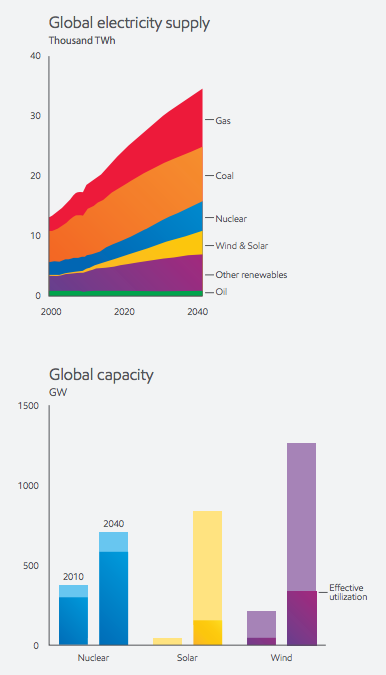 Exxon expects global energy-related CO2 emissions to increase by about 25 percent from 2010 to 2030 and then to decline approximately 5 percent to 2040. Global CO2 emissions are expected to be about 6 billion metric tons higher in 2040 than they were in 2010, which is about half the level of emissions growth from 1980 to 2010. From 2010 to 2040, Exxon expects that emissions in the OECD countries to decline by more than 20 percent. By 2040, CO2 emissions in the OECD are projected to be about 10 percent below 1980 levels. CO2 in the developing countries are expected to be over 250 percent higher in 2040 versus 1980, due to a doubling of the population and economic output increasing by about 1,000 percent. 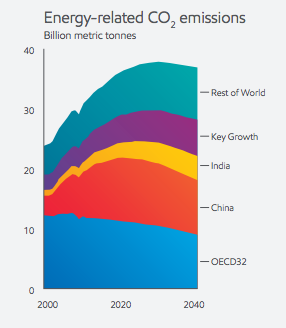