Gina McCarthy, the administrator of the Environmental Protection Agency (EPA), is promoting the Clean Power Plan as a “fair” and “flexible” program despite the plan’s ironclad statewide carbon emission targets, collectively designed to meet a nationwide reduction of 32 percent by 2030. McCarthy emphasizes that states are in the “driver’s seat” to meet their targets, while President Obama singled out California as a model for states to follow in implementing the plan.

Indeed, California aggressively positioned itself as a model for developing a “low-carbon economy” over the last decade, when it began implementing policies the EPA is now forcing on the rest of country. This has been achieved by enforcing nearly 200 state and local mandates aimed at reducing carbon dioxide emissions while funding generous subsidies for renewable energy, financed on the backs of the poor. In fact, new research shows the state’s energy policies are partially responsible for putting nearly one million Californians into energy poverty. This is a fate that could be exported nationwide under EPA’s new carbon regulation.

Recently, Tony Earley, CEO of Pacific Gas and Electric Company, wrote, “As the state works to implement [the carbon] rule, California has the opportunity to continue to set an example for the nation on how to transition to a low-carbon future.” This is true—the state is on track to meet EPA’s costly requirements. The day Obama announced the carbon regulation, California officials agreed that the hundreds of policies the state has in place will meet EPA’s specifications for emission reduction targets a decade before the 2030 deadline. The EPA is forcing all states, as the Los Angeles Times noted, to act “more like California.”

Making the rest of America look “more like California” would not be a good thing. First of all, California is blessed with temperate weather which reduces the need for heating and cooling that much of the rest of the U.S. requires, and therefore, they have traditionally used less energy for such essentials than other states. However, California’s misguided, market-distorting policies have caused the state’s electricity prices to rise 40 percent above the national average. Moreover, California imports more of its electricity from outside the state than any other state in the Union. California’s emission reduction strategy hindered economic growth and has left the state dependent on an increasingly unreliable power grid. McCarthy’s claim that the carbon rule “is not about where you live, or how much money you make,” is dubious at best, considering that low-income Americans face an energy burden nearly twice that of the wealthy. As a result, they are much less well equipped to afford rate increases, more expensive energy efficient cars and appliances that will be mandated by states to meet EPA’s target.

A recently published report by Jonathan Lesser shows energy poverty levels vary based on where Californians live and how much they make. The report defines energy poverty as those who spend at least 10 percent of their personal income on energy costs.

Less Carbon, Higher Prices: How California’s Climate Policies Affect Lower-Income Residents, links California’s restrictive Renewable Portfolio Standard (RPS) and cap-and-trade program to significant electricity rate increases. The study, published by the Manhattan Institute, holds these policies, along with California’s flawed electric pricing system, responsible for leaving over 7 percent of the state’s population—or nearly one million Californians—in energy poverty in 2012. Not only do these regulations disproportionately burden poor Californians, but they subsidize lower rates paid by wealthy residents along the coast.

As the chart below illustrates, average electricity rates from California’s three major utilities ranged from 18 to 21 cents per kilowatt hour (kWh) in 2014, well above the national average of 12 cents/kWh. The gap widened considerably since California’s environmental policies went into effect over the last decade, with PG&E’s and SCE’s rates rising by 50 percent and 80 percent between 2004 and 2014. 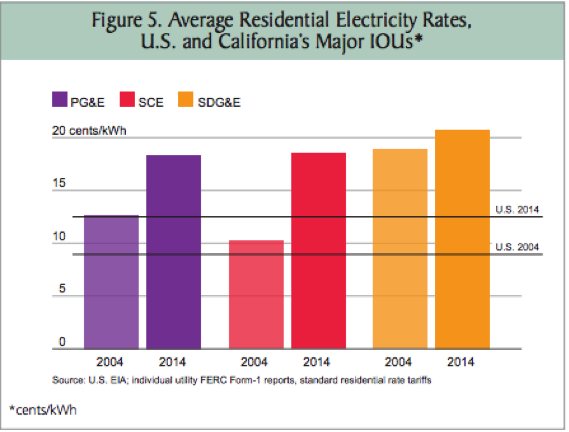 The burden of these policies is not felt in coastal areas like Marin or Santa Barbara, where the air is clean and the climate is temperate. Its wealthy residents are also some of the largest supporters of subsidized solar energy in the U.S. Due to California’s energy policies, an estimated one million Californians were living in energy poverty in 2012, with many of them living in inland regions of the state.

Lesser details how some of these California-style policies hurt the poor:

Renewable Portfolio Standard – “[T]he cost of acquiring energy from renewable sources is far higher than the market price of power. Further, because most wind and solar generation is developed in remote locations, California’s utilities have constructed hundreds of miles of new high-voltage transmission lines, whose costs are passed on to households.”

Cap-and-Trade – “Given that California’s residential electricity consumption (excluding self-generation) equaled roughly 89 million MWh in 2013, cap-and-trade would have raised residential electricity costs by nearly $540 million. As California’s mandated cap-and-trade reductions rise, so, too, will the costs they impose—driven by the purchase of more costly carbon-emitting permits and the switch to carbon-free, higher-cost renewable sources.”

Natural Gas – Lesser did not analyze the recommended transition from coal to lower-emitting natural gas. We previously discussed how natural gas supplied 62 percent of new electric capacity in California since its RPS was enacted in 2003. California can rely on natural gas as a reliable resource because it doesn’t have the heating demand of northern states, but the fuel can be subject to shortages and price spikes—necessitating other states to have a supply of multiple conventional fuels for reliable electricity during harsh winters.

Attempts to force a collective social benefit (less carbon dioxide) by increasing energy prices on everyone will disproportionately burden the poor, who must spend a much higher percentage of their lower incomes on energy. It also quashes economic growth, which led the National Black Chamber of Commerce to argue against the plan before Congress.

The Golden State is gifted with wealth, sunshine, and a temperate climate—the best-case scenario for the generation of renewable energy. Yet the state still hasn’t been able to stem its rapidly rising energy costs. The number of Californians in poverty has likely swelled as a result. States that attempt to meet EPA’s strict carbon rule while lacking California’s mild weather are poised for even worse disaster. Yet that is exactly what EPA is calling on states to do.

States that submit plans to EPA will have little choice but to craft policies that disproportionately hurt their most vulnerable residents. California is an “example for the nation” of what to expect if states acquiesce to EPA’s carbon rule. The regressive impact of emission reduction mandates is undeniable. Poor Americans deserve the opportunity, security, and other benefits associated with affordable and reliable energy. The best way elected leaders can protect their most vulnerable citizens from Obama’s carbon agenda is to reject the administration’s calls for state plans.

The Poor and Sick Suffer Under Obama's Carbon Rule