Over the last couple years I’ve become fascinated and inspired by a cohort[1] of personal finance bloggers who push frugality to the extreme. One of my favorites is Mr. Money Mustache.

Mr. Money Mustache is a treasure trove of sage advice for building net worth and reducing wasteful expenditures. His latest blog post is about his purchase of an electric car—the 2016 Nissan Leaf.

From a personal finance perspective, his case for buying the car is a slam dunk. How, you might ask, could buying a new car ever be the financially prudent thing to do? Well, when you’re raking in electric car subsidies from both the state of Colorado and the federal government, the numbers actually look pretty rosy. Mr. Money Mustache, who to his credit is quite transparent, offers us the following data on the purchase: 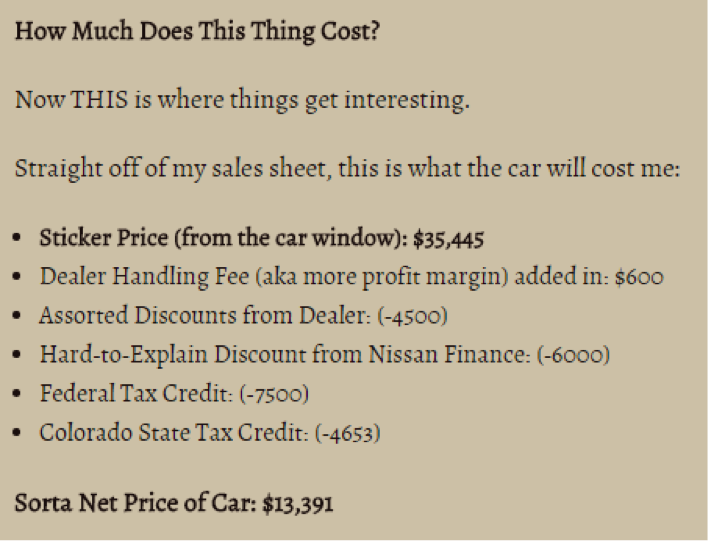 Not counting the Hard-to-Explain Nissan discount and the dealer discounts, Mr. Money Mustache is getting $12,153 in tax credits. In other words, come tax season, he’s getting over $12K right back into his pocket.

Mr. Money Mustache doesn’t take the time to explain why Nissan would provide an additional $6,000 in incentives from Nissan Finance. One explanation is that Nissan and other automakers need to sell electric cars to offset sales of gasoline-fueled cars in order to meet the federal government’s corporate average fuel economy mandates. In effect, Nissan might be self-subsidizing sales of the Leaf with sales of its popular Altima, Maxima, Sentra, and Titan models. With the fuel economy regulations requiring automakers to get an average fuel economy of 54.4 mpg by 2025, selling electric cars is one way to get there.

Furthermore, in some states, though Colorado is not one, there are requirements to sell “zero emission vehicles (ZEVs).” Because of this mandate, the sale of ZEV credits can be very lucrative. In the first quarter of this year, for example, Tesla reported $57 million in ZEV credit revenue.

It’s hard to fault Mr. Money Mustache (who has surely paid more than his fair share in taxes over the years) for taking this sweet deal, but it’s all the more reason to vociferously argue against such schemes. In Mr. Money Mustache’s own words, “(his) family absolutely did not need a new car. Or even a new used car. In fact, we didn’t even need the two older used cars that we have been keeping around for the last five years.” But as any economist will tell you: incentives matter.

By slashing the effective price for an electric car, the federal government and the state of Colorado are enriching savvy and typically wealthy consumers at the expense of everyone else. Much like the net-metering schemes that subsidize homeowners who can afford to install solar panels, this sort of program amounts to welfare for the rich.

While I won’t take issue with Mr. Money Mustache’s playing of the subsidy game, I will call him out on his advocacy for electric cars and his discussion of electricity generally, which is—at best—misinformed.

Mr. Money Mustache claims, “electric motors are much more efficient, even the worst case (charging an electric car purely on coal-fired electricity) comes out slightly better than burning the typical fracked and imported gasoline mix. Even better, the US electric grid is only about one third coal these days, and dropping.” But in reality, switching to an electric car serves little purpose other than vanity.

While the US grid as a whole may get just one third of its power from coal, that doesn’t reflect the electricity mix in Mr. Money Mustache’s home state of Colorado, where 60 percent of electricity comes from coal-fired power plants and another 17 percent from natural gas, or many other states.

According to a study by the Union of Concerned Scientists, an electric car’s overall carbon dioxide output in Colorado is comparable to that of a conventional car that gets 35 miles per gallon of gasoline. In other words, driving an electric car in Colorado is no different than driving an average car by today’s fuel economy standards. Believe it or not, across much of the country, electric cars have more of an environmental impact than regular cars.

As the icing on the cake, Mr. Money Mustache offered us this outlandish statement to boost his enviro bona fides: “At my house, I’ve enjoyed 100% wind power for over 10 years, just by signing up to my local power company’s wind power program.” As IER’s Travis Fisher clarified last year, assertions of this sort are preposterous.

Instead, his house uses electricity from the grid. And electricity, once on the grid, cannot be differentiated by source. As mentioned earlier, Colorado uses 60 percent coal to produce electricity, but Mr. Money Mustache’s municipality of Longmont is even more heavily weighted in that direction, with 74 percent of the Platte River Power Authority’s electricity coming from coal.

[1] Check out Frugalwoods, And Then We Saved, and Rockstar Finance.

[2] Mr. Money Mustache, if you really do have a windmill in your back yard, I apologize.