Earlier this month, the German Bundesrat (a council of 16 German states) voted for a non-binding resolution to ban vehicles powered by gasoline and diesel by 2030.[i] This was an ideological move that is intended to place additional pressure on the European Commission to promote zero-emission vehicles. The German Transport Minister, Alexander Dobrint, calls the resolution “utter nonsense” and will not approve it were it to cross his desk.[ii]

The resolution was passed with support from both sides of the German political system. Despite the resolution being non-binding, it is some evidence of parts of the European political system pushing for increasingly tough emissions laws and some cities (e.g. Paris) restricting the use of fossil-fuel powered vehicles.[iii] The resolution calls on the European Commission (the executive arm of the European Union) to “evaluate the recent tax and contribution practices of Member States on their effectiveness in promoting zero-emission mobility,” which may mean an end to the lower levels of tax currently levied on diesel fuel across Europe. Europe had pushed diesel vehicles, which are more efficient than gasoline vehicles, heavily after World War II. Creating an even tougher tax burden may encourage manufacturers to push electric vehicles into production sooner.

This resolution is an interesting development. The auto industry in Germany is one of the largest sectors of its economy; it represents about 2.7 percent of Germany’s gross domestic product, and vehicles and vehicle components make up 20 percent of its exports.[iv] Germany produces more automobiles than any other country in Europe and is the fourth largest in the world. It is no wonder that the German Transport Minister called the resolution “utter nonsense”.

However, German automakers are investing in electric vehicles despite lukewarm sales, which may be a signal to their commitment to going electric. For example, BMW is beginning to work on an electric Mini and an electric SUV despite its i3 series having a poor showing in the United States (i3 sales for the first 9 months of 2016 in the United States were 27 percent lower than the corresponding sales in 2015). It expects an all-electric Mini to be market-ready by 2019 and the X3 SUV to be ready by 2020. Not long ago, BMW was resistant to building an electric Mini-brand car because Minis have a smaller profit margin than BMW-brand cars, and the investment costs of building an all-electric vehicle are considerable. The Mini’s platform would have to be totally redesigned to accommodate a huge battery, and Mini factories would have to be adapted to accommodate the new model. But, despite these problems, BMW is moving forward with its electric vehicle program as is Volkswagen, who announced that it will have a long-range electric car called the I.D. in 2020. [v]

This trend has resulted despite some very lucrative electric car incentives by some European governments. For example, Norway had a very lucrative incentive program where electric cars were exempt from value added tax and purchase tax, which on average added 50 percent to the cost of a vehicle. They were also exempt from road tolls, tunnel-use charges, and ferry charges, and received free parking, free charging, and the use of bus lanes. When Norway reduced the incentives to owners having to pay half of the road tax from 2018 and all of it from 2020, replacing the valued added tax exemptions with a subsidy, and allowing local authorities to decide whether to offer free parking, exemption from tolls, and the use of bus lanes,[vii] car purchasers turned away from battery electric vehicles, purchasing plug-in hybrids instead.

In France, however, the electric vehicle market is booming because of its €10,000 ($11,025US) ‘super bonus’ for purchasing a new electric car and scrapping an old diesel vehicle. Without France, sales of battery electric vehicles in Western Europe would have dropped 6.1 percent in the first eight months of 2016, and 6.7 percent in August.

Sales of battery electric vehicles in Western Europe for the first eight months of this year were as follows: 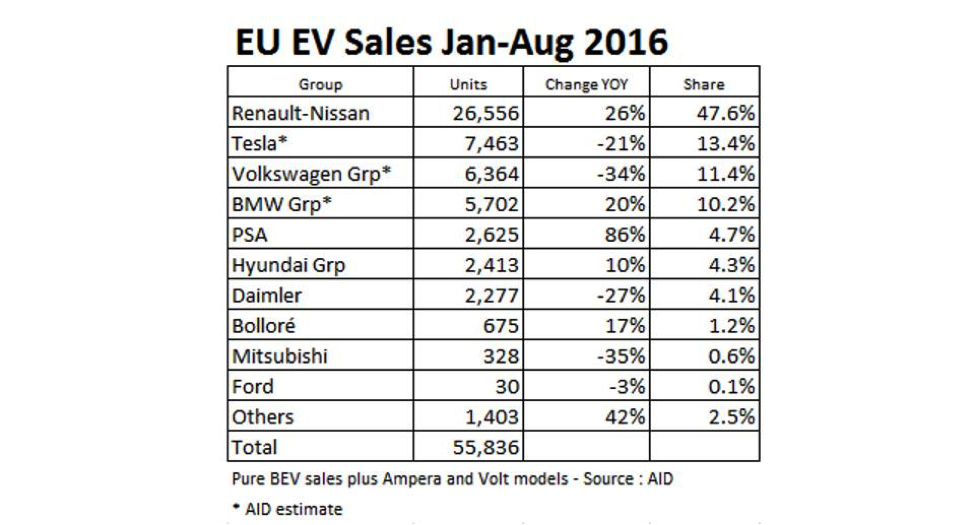 The Paris Agreement to reduce greenhouse gas emissions may be spearheading resolutions such as the one the German Bundesrat made that no new combustion engine cars should be allowed by 2030. Despite this push by politicians and some lucrative government incentives for their purchase, electric vehicle sales are down in Europe—the second largest market behind China—while overall vehicle purchases are up. European politicians want their people to do as they say, but it may not be what the people want, nor it may not be what is best for the economy, particularly in Germany’s case. Thus, it is “utter nonsense,” as the German Transport Minister referred to it.

[v] Ars Techinca, BMW will make an electric Mini and an electric X3 SUV after all, September 30, 2016, http://arstechnica.com/cars/2016/09/bmw-will-make-an-electric-mini-and-an-electric-x3-suv-after-all/

[vii] Quartz, Norway’s electric-car incentives were so good they had to be stopped, May 7, 2015, http://qz.com/400277/norway-electric-car-incentives-were-so-good-they-had-to-be-stopped/