Last week we released a new study showing there are high costs to rooftop solar subsidies. Critics have attacked the study but their arguments have no substance and are either based on ignorance or willfully ignoring the facts.

The first critique came from the Solar Energy Industries Association (SEIA), the trade group for solar energy companies. Dan Whitten, the vice president of communications for SEIA told Greenwire that “The report’s findings are stuck in the past.” The findings are similar to a “rotary phone” because “It’s a nice relic, but not all that relevant to people now.”

The first thing to note about Whitten’s comment is the utter lack of substance. He is not challenging anything in the report itself.

Second, it isn’t clear what he is saying is a relic. If he is saying that high rates for solar customers who sell electricity back to the grid is a relic, then he is correct. For years, such net metering programs have forced non-rooftop solar users to subsidize net metering customers. Fortunately, as the report points out, states like Nevada and Arizona, two states with a lot of sun, are changing their rates to be more equitable to all ratepayers instead of providing lavish subsidies for solar panel owners.

A second critique came from a statement from the Center for Biological Diversity (CBD). The statement starts predictably by not addressing the findings of the report, but instead by talking about the Koch brothers and Exxon and saying “let’s not forget that it’s the fossil fuel industry that has long been kept afloat by government subsidies.” This is untrue and CBD provides no evidence to make its case that natural gas, oil, and coal have long been kept afloat by subsidies.

People argue about whether tax preferences that oil and gas companies receive (which are similar to tax preferences other businesses or manufacturers receive) are production subsidies, but the United States does not have consumption subsidies. It is true that countries like Iran, Turkmenistan, and Colombia subsidize the consumption of fossil fuels, but that point is irrelevant to the issue of energy policy or energy subsidies in the United States.

Our latest look at IEA’s subsidy report is here.

When we look at subsidies in the United States, we find that subsidies for renewables dwarf those for natural gas, oil, and coal. This is despite the fact that CBD says the solar industry receives “trivial governmental support” compared to fossil fuels. 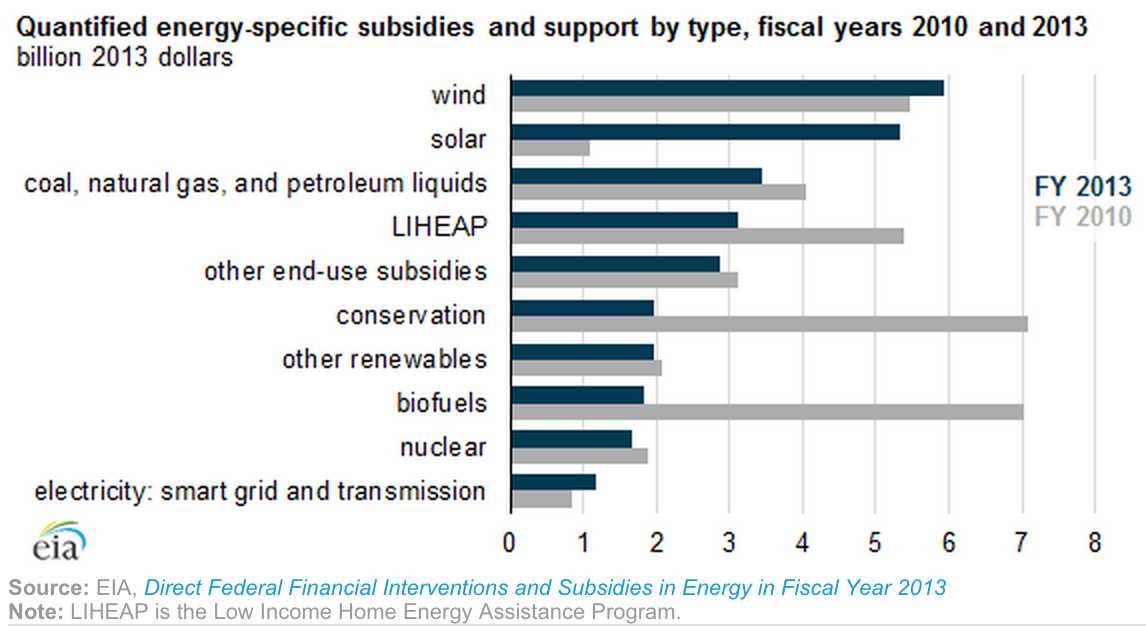 With subsidies of $5.3 billion in 2013, it is no wonder the solar industry is growing. How could they not with the help of so much money from the U.S. taxpayer?

It is also important to put subsidies in the context of the size of the industry. For example, the CBD says the fossil fuel industry has been “kept afloat by government subsidies.” However, taking a look at federal subsidies handed out relative to the amount of energy produced by each source reveals a different story. Compared to other electricity-generating resources on a per-megawatt-hour basis, subsidies for solar energy are much higher than for wind power, the second most heavily subsidized source, and hundreds of times higher than other sources. 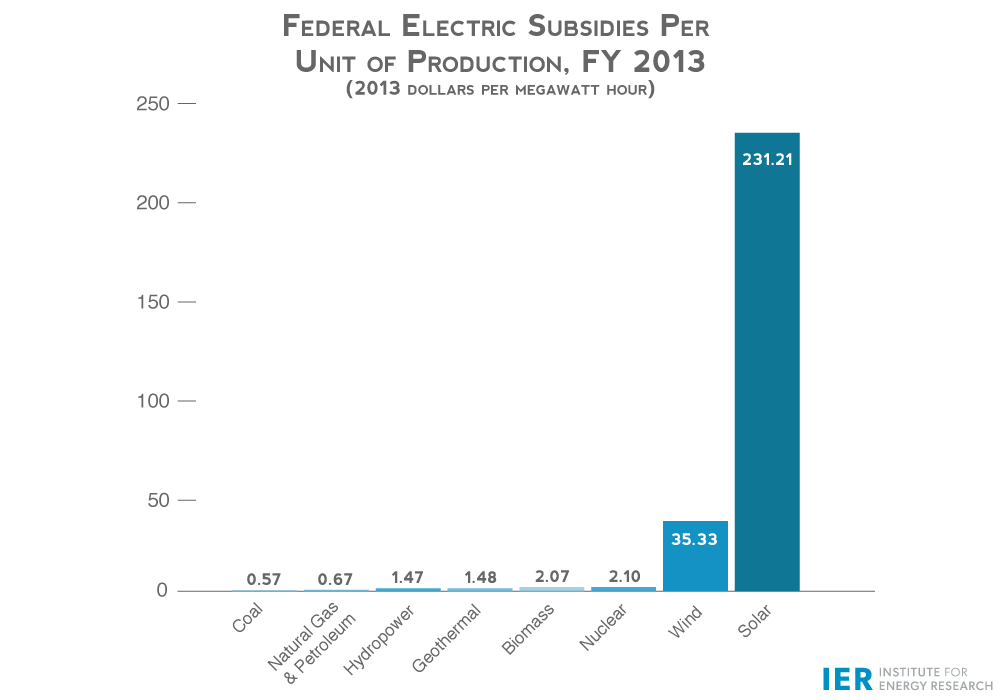 There are a few important conclusions to draw from these attacks on our recent report on net metering and rooftop solar subsidies. First, our report is factually sound. The fact that these groups resort to name calling and citing inapplicable data instead of dealing with the substance of the report suggests they cannot find anything factually wrong with the report.

Second, these groups do not understand some basic facts about energy in the United States. For example, CBD apparently doesn’t understand that IEA’s subsidy report looks at consumption subsidies, which the U.S. does not have. Second, they believe that subsidies for solar power are “trivial” compared to subsidies for fossil fuels, when a U.S. government report shows that in 2013 solar subsidies exceeded fossil fuel subsidies. Further, using a per-megawatt-hour metric for federal subsidies reveals how significant solar subsidies are compared to other sources of electricity.

Hopefully when these groups understand the facts about energy they will join us in calling for an end to all subsidies.

A Closer Look at Obama’s "Crowning Achievement": The Paris Agreement