President Obama wants to be heralded for his achievements on climate change. After the cap-and-trade bill he supported failed to even get a vote in a Democratic-controlled Senate he aggressively pursued a regulatory agenda instead of working with Congress. He also worked hard to get the Chinese and Indian governments to ratify the Paris Agreement, thereby ensuring that the Paris Agreement will enter into force before the next U.N. meeting later this year. Unfortunately for Americans, President Obama’s regulations and mandates will result in higher costs with little benefit to global temperatures. Furthermore, because the Paris Agreement is non-binding, even for the countries that have ratified it, there is little reason to believe countries will comply.

Even the United States will not likely comply with the Paris Agreement despite all of the climate rules President Obama has imposed. President Obama pledged that the United States will reduce greenhouse gas emissions by 26 to 28 percent below 2005 levels by 2025. But, multiple studies say the regulations in place will not lead to reductions this great. But because of the regulations he has imposed. Americans will pay more for energy, food and other necessities.

The Paris agreement takes effect once at least 55 nations making up at least 55 percent of global carbon dioxide emissions ratify it. China and the United States–the two largest greenhouse gas emitters–ratified earlier this year. In October, India and the European Union ratified the Paris Agreement, reaching 64.20 percent of global greenhouse gas emissions—over the 55 percent required putting the plan in force. The agreement will go into force in early November.

The European Union was the most recent group to ratify, tipping the scale to over the 55 percent needed. The European Union (EU)’s member nations combined represent 12.09 percent of global greenhouse gas emissions. Germany, France, Italy and Poland each represent over 1 percent of the global greenhouse gas emissions total. The United Kingdom and Northern Ireland, representing a 1.55 percentage share, are included in the EU list even though the UK will exit the EU within two years.[i]

Shortly after making this commitment, the U.S. Chamber of Commerce explained that the Obama administration’s plan did not add up.[ii] Now, another study confirms that the U.S. will not meet its commitment. The new study argues that the United States will only reach about four-fifths of that goal based on current policies. According to scientists at the Lawrence Berkeley National Laboratory, the United States will need to reduce about 1,660 million tons of annual greenhouse gas emissions (carbon dioxide, methane, nitrous oxide, and various fluorocarbons). But, the current proposed policies would only reduce about 1,330 million tons, leaving a gap of about 330 million tons.[1][iii] (See graph below.) 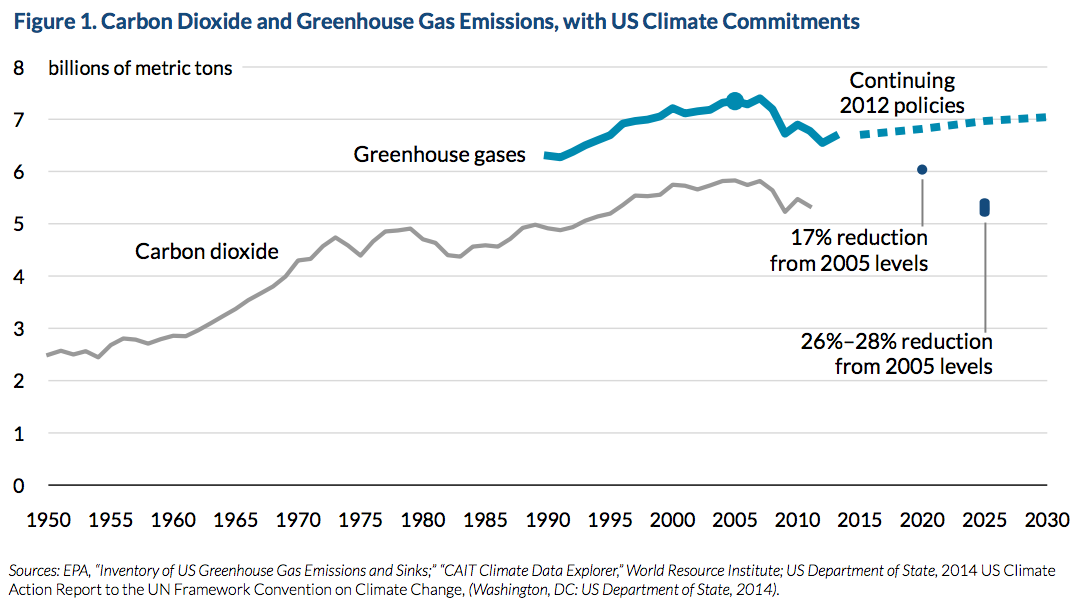 The authors believe that the gap can be closed by additional regulatory action, but those actions will cost U.S. consumers even more and not reach the Paris Agreement goal of limiting temperature change to between 1.5 and 2.0 °Celsius above pre-industrial levels.

Furthermore, as IER’s Bob Murphy explains, the Intergovernmental Panel on Climate Change’s (IPCC) reports show that limiting global warming to 2°C isn’t even close to being justified by the year 2050 and even by the year 2100, it cannot be justified using the scant evidence in the IPCC report. So if we believe the IPCC’s reports, the goal of the Paris Agreement cannot be justified.

President Obama sees the Paris Agreement as “one of the most significant aspects of his legacy”.[iv] He has committed the United States to the Paris agreement (without ratification by the U.S. Senate) and talked China and India into ratifying the agreement. However, with no mechanism for countries to comply, the end result will be higher energy, food and commodity prices for American consumers with little reduction in global temperatures.

[1] The margin of error is large–plus or minus hundreds of million tons.