Recently, Caelus Energy announced it had found an oil field off the North Slope in Alaska that could produce as much as 2.4 billion barrels of oil. Earlier, Apache Corporation found an oil field in West Texas, containing at least three billion barrels of oil and 75 trillion cubic feet of natural gas. These new finds coupled with increased efficiencies in production from shale resources show that U.S. oil and natural gas producers will continue to be able to domestically produce affordable and reliable energy for years to come. This is welcome news.

Caelus Energy LLC made the oil find in the shallow waters of Smith Bay, about 300 miles north of the Arctic Circle. It expects to be able to produce between 1.8 billion and 2.4 billion barrels. The oil will probably be produced by building barges along the Gulf Coast, towing them to Alaska and sinking them in the bay to create man-made drilling islands.[i]  The oil in Smith Bay is located in shallow waters near land.

Caelus plans to build an $800 million, 125-mile pipeline that will carry the oil to existing pipelines. Alaska needs the oil to maintain the minimum flow needed to keep the Trans Alaskan Pipeline System (TAPS) operational.

While Federal lands with plenty of oil exist in Alaska, the Obama administration has only allowed very limited drilling on federal lands in Alaska. This find, however, was in state waters, not federal waters. A pipeline is planned to carry the oil to reach existing pipelines and Federal permits will be needed for pipeline construction.  Even though Alaska’s pipeline regulations are friendlier to energy companies than elsewhere in the United States, it could take between five and ten years before any oil is produced. 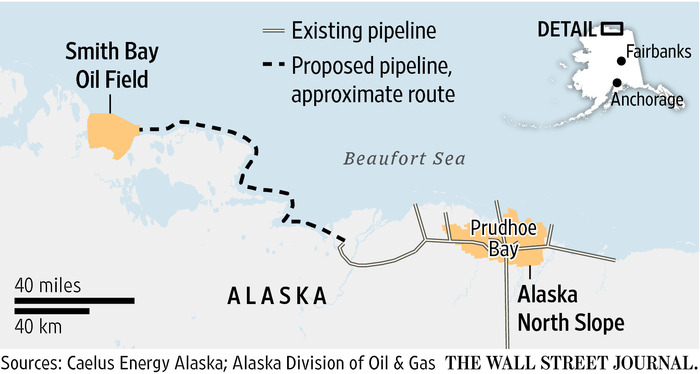 Caelus has drilled two wells that are six miles apart and used three-dimensional seismic testing over 126 square miles to determine that there could be as much as six billion barrels of oil under Smith Bay, of which 30 to 40 percent is recoverable.[ii] The field is expected to produce 200,000 barrels of oil a day[iii], more than 60 percent of what Alaska’s giant Prudhoe Bay field currently produces. When this find is combined with an adjacent field, the total discovery could be over 10 billion barrels. The company plans to drill a third well in January 2018. If its estimates prove to be correct, the discovery would be larger than Exxon Mobil’s 2015 discovery off the coast of Guyana in South America.

The Alaska oil find is not the only recent large oil find in the United States. In the oft-explored Permian Basin, in Texas, Apache Corp made a large oil and natural-gas discovery. It estimates that the region contains at least 3 billion barrels of oil and 75 trillion cubic feet of natural gas and has 350,000 acres of drilling rights. The area was originally bypassed by drillers because its underground layers of shale rock were thought to be too fractured and jumbled to support a productive well. The area was also believed to be full of clay, which complicates drilling. But, none of these assumptions proved true.[iv]

So far, the company has drilled 19 wells; nine of which are producing limited amounts because the find is in a corner of the Delaware Basin that is short on infrastructure to process and transport oil and gas. Oil and natural gas production is expected to occur at more normal rates by the second half of 2017. To accelerate drilling, Apache raised its 2016 capital budget by 11 percent to $2 billion and will need about one-quarter of it for the new find. It estimates the region may support 2,000 to 3,000 wells at oil prices of $50 a barrel and natural gas prices at $3 per thousand cubic feet.

Together, these discoveries are relatively modest compared with the shale oil and gas plays that were opened earlier in the decade using hydraulic fracturing. Shale oil was predicted to be the loser when oil prices plunged in 2014. Though the drop in prices resulted in over 100 North American energy producers declaring bankruptcy, U.S. oil production only decreased by 579,000 barrels a day for the first 8 months of this year compared with 2015, when it averaged 9.4 million barrels a day.

U.S. oil production has been resilient because U.S. producers found ways to cut costs and enhance efficiencies. (See chart below.) For example, in May, Halliburton Company helped tap the longest shale well on record—8,500 feet deep and 18,544 feet long–for Eclipse Resources Corporation in Ohio. That well was fracked 124 times—3 to 4 times more than the normal shale well, which is fracked between 30 and 40 times, up from being fracked 9 times in 2011 at the start of the oil boom.[v] 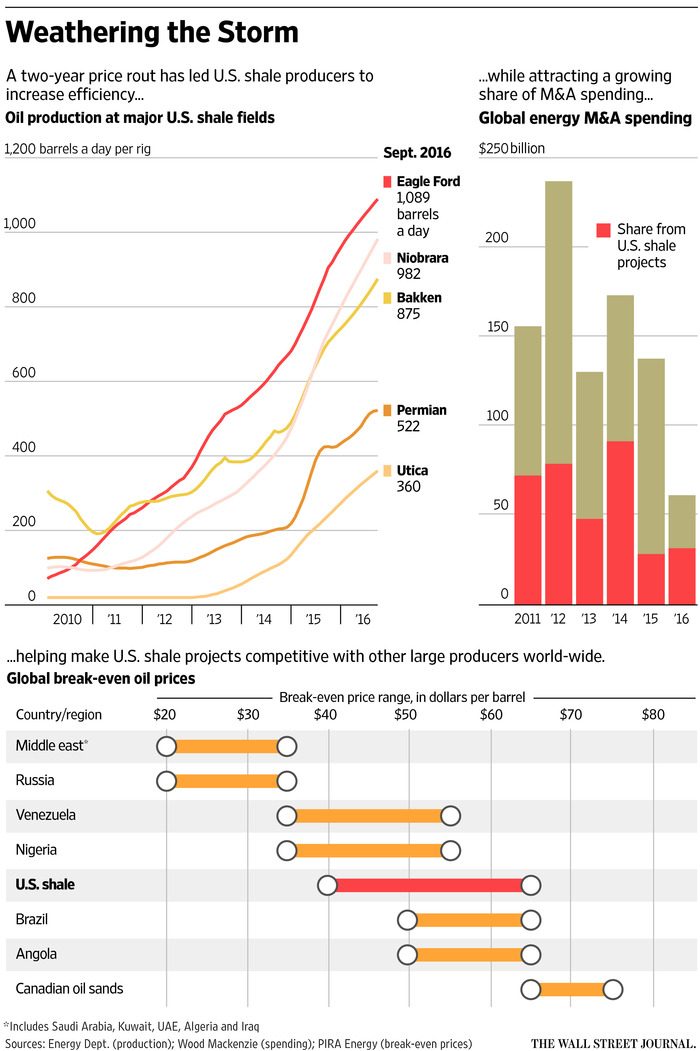 When oil prices were high, it became obvious that America had large oil and natural gas resources as the hydraulic fracturing revolution opened up vast new areas for production. However, when prices fell, many thought that low prices would decimate the industry. These new finds in Alaska and the Permian Basin shows that even at much lower oil prices, domestic oil and natural gas producers are finding new sources of resources for the future.

Also, when prices fell, many thought that it might be the end of the shale revolution because shale resources can be more expensive to produce than conventional oil and natural gas resources. However, innovation has led to much lower production costs than previously believed possible. This is great news for Americans because it means that oil and natural gas prices will likely continue to remain affordable for years to come.

President Obama Wants Us to Conserve Energy like Japan

A Closer Look at Obama’s "Crowning Achievement": The Paris Agreement