On October 3, President Obama stated in his discussion with Leonardo DiCaprio, “If we just had the energy efficiency of Japan, which is an island nation that doesn’t have a lot of fossil fuels, and so, historically, in their development path have been much more conscious about energy efficiency, we could reduce our energy consumption by 20 percent without changing our standard of living.”[i]

To see if this statement is true, let’s examine what Japan did to replace its nuclear power after the accident at the Fukushima nuclear power plant caused by the tsunami. Japan’s nuclear power was replaced by a combination of conservation (demand reduction), and increased natural gas, coal, and oil generation as shown in the graph below.[ii]

A portion of the replacement power (demand reduction) was from a movement known as “Setsuden” (“saving electricity”). This energy conservation movement consisted of increasing temperatures in homes and offices thereby reducing air conditioning, removing some light bulbs thereby reducing lighting, shutting down large screens and cutting exterior lighting. Despite President Obama indicating it was doable without changing one’s standard of living, the Japanese found that it did reduce their personal comfort. In addition, the dress code in offices was eased to reduce air conditioning in office buildings and work schedules and vacation days were changed to distribute energy usage more evenly.

Beginning July 2011, buildings with electrical usage exceeding 500 kilowatts were mandated to reduce electricity usage by 15 percent, and other companies were asked to reduce usage up to 30 percent. Fines were issued for exceeding usage or not meeting target electrical savings that could cost the company up to 1 million yen ($9700). These restrictions were in place for three months, ending in September 2011.[iii]

Productivity and convenience was decreased in favor of energy conservation. As such, public transportation ran slower, escalators in stations were stopped, billboards were turned off when not displaying energy usage levels, and most display and exhibition lighting was turned off.

President Obama thought he could institute similar savings in the United States. In 2011, in his State of the Union address, President Obama called for achieving a 20 percent improvement in energy efficiency in buildings, which use about 20 percent of total U.S. energy, by 2020.[iv] This, of course, has not happened. But, using climate change as the issue, clearly he again would like the United Sates to mimic Japan in its conservation efforts. But, a national disaster made the Japanese adhere to the guidance from its government. The same situation is not before Americans.

Japan did reduce its power requirements by 12 percent between 2010 and 2015, but the country is more reliant on fossil fuels for its generation today—natural gas, coal, and oil—than it was when almost 30 percent of its electricity was being generated by nuclear power in 2010. It now generates 44 percent of its electricity from natural gas (compared to 29 percent in 2010) and 32 percent from coal (compared to 25 percent in 2010). Solar, wind, and other non-hydroelectric power has increased to just 4.7 percent of generation in 2015 from 1.1 percent in 2010.[v] (See chart below.)

As discussed in this IER blog, Japanese utilities are resisting renewables because of concerns about the costs of renewable energy when fossil-fuel imports are cheap, as well as renewable projects’ safety and environmental impact. Inexpensive coal and natural gas, which is mostly imported, comprise over 75 percent of Japan’s energy needs in the year ended in March, compared with 54 percent in 2010–before the nuclear accident at Fukushima. 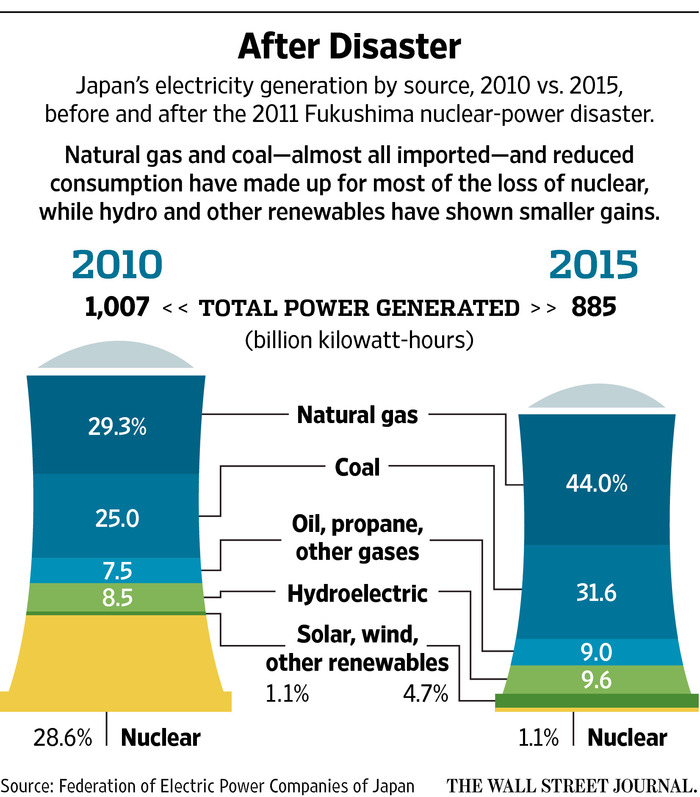 President Obama is using Japan as an example of reducing electricity requirements through conservation and efficiency. However, while Japan has reduced some of its electricity demand after the Fukushima nuclear plant accident, the country is now using more natural gas, coal, and oil to satisfy its electricity demand due to mothballing its nuclear plants. The total energy package in Japan does not look like something President Obama would like us to emulate, particularly since it shows more coal generation.

[i] The White House, Remarks by the President in South Lawn Panel Discussion on Climate Change, October 3, 2016, https://www.whitehouse.gov/the-press-office/2016/10/03/remarks-president-south-south-lawn-panel-discussion-climate-chang

[ii] Greentech Media, How Japan Replaced Half of Its Nuclear Capacity with Efficiency, April 10, 2014, http://www.greentechmedia.com/articles/read/how-japan-replaced-half-its-nuclear-capacity-with-efficiency

Greg Ip Unwittingly Makes a Case AGAINST a Carbon Tax