Rather than admitting to the public that they were ill-prepared for Hurricane Sandy and natural weather events are part of life on earth, some politicians want us to believe that climate change was the cause of the storm and that the government thus needs to control the climate by increasing the cost of energy, namely by  taxing carbon. Of course, the east coast has been hit by many hurricanes during the recorded history of this country. There were many more hurricanes in the 1950s than in the post- 2000 era and climate change wasn’t even an issue then. For example, between August 1954 and August 1955, the east coast saw three different storms make landfall—Carol, Hazel and Diane.

The political remedy many politicians are seeking to global climate change is a carbon tax, to increase the cost of energy and discourage its use. Such a tax affects all users of fossil fuels. So, the poor and the middle class will be affected as well as the rich—the ones that President Obama wants to tax.  And, unfortunately, little will be accomplished because greenhouse gas emissions are global and for any reductions we make here in the United States, more than compensating increases will come from developing countries worldwide.

Hurricane and Other Weather History

Since 1900, there have been 242 hurricanes or tropical storms to hit the United States. According to the catastrophe-insurance provider ICAT, in terms of destruction, the Great Miami Hurricane of 1926 ranks first and Katrina ranks fourth, at $180 billion and $85 billion in inflation-adjusted damage, respectively. Hurricane Sandy at $20 billion ranks number 17.  Also, the three storms noted above hitting the east coast between 1954 and 1955 would have caused about twice as much damage as Hurricane Sandy in 2012 terms.

According to Roger Pielke Jr., Professor of Environmental Studies at the University of Colorado, the United States is currently in an extended and intense hurricane “drought.” The last Category 3 or stronger storm to make landfall was Hurricane Wilma in 2005, which means that more than seven years has transpired–the longest such span in over a century.[i] Not only are the number of land-falling powerful hurricanes down, but Pielke explains that tornado damage has decreased since 1950 when the data was adjusted for changing levels of development. Last year saw large tornado impacts, comparable to tornados in 1953 and 1964, but such tornado impacts were far more common in the first half of the 20th century.

“Our climate is changing. And while the increase in extreme weather we have experienced in New York City and around the world may or may not be the result of it, the risk that it may be — given the devastation it is wreaking — should be enough to compel all elected leaders to take immediate action.”

Yet, Robert Pielke Jr. tells us that the weather models based on New York City’s location and past history indicate that over a 50 year period, New York City has a 13.6 percent chance of a hurricane hitting and a 3.3 percent chance of a hurricane of Sandy’s magnitude hitting. Apparently, New York City is particularly vulnerable to storm surge because of a curve in its shoreline that funnels and increases the speed and intensity of the surge. This curve, called the New York Bight, is located at the point where New York and New Jersey meet, creating a right angle in the coastline. Further, the New York City Natural Hazard Mitigation Plan, written in 2009, noted this vulnerability of New York City to hurricane damage, and should have made politicians aware and better prepared than they were for Sandy’s impact.[iii]

Federal politicians and others are discussing taxing carbon emissions as part of a broader tax-reform package to raise revenue and help reduce the deficit. For example, according to Nick Robins, an analyst at HSBC Holdings Plc. in London, a carbon tax starting at $20 a metric ton of carbon dioxide equivalent and rising at about 6 percent a year could raise $154 billion by 2021.[iv]  According to a Brookings analyst, a tax of $20 per ton of carbon dioxide emissions would add up to 9 to 10 percent to the price of gasoline and electric power.[v] Another proposal, the Managed Carbon Price Act of 2012, by Representative McDermott from Washington State would enact a carbon tax that would rise exponentially in the future, without a cap, and that could add nearly $9,000 to a family’s energy costs in the next decade.[vi]  The Congressional Research Service indicated that a $20 per ton tax on carbon emissions could halve the U.S. budget deficit over time, generating about $88 billion in 2012 and $144 billion by 2020, reducing U.S. debt by between 12 and 50 percent within a decade depending on how high the deficit increases.[vii]

A carbon tax is essentially a mechanism to charge emitters of greenhouse gases, such as power plants and oil refiners, for each ton of carbon dioxide they emit. These costs would of course be passed onto the consumer—all consumers of energy, not just the rich.

Proposing an energy-cost increase at a time when unemployment and gasoline prices are high seems to be an economically destructive policy as a recent poll shows. The poll found that only one in five Americans would be willing to pay significantly more for gasoline or electricity even if they were assured that climate change would be reduced. Only 21 percent would be willing to pay 50 percent more for gasoline or for electricity and fifty-four percent would be unwilling to do so even though the survey found that 61 percent of the respondents thought global warming was occurring.[viii]

One argument for a carbon tax is to replace subsidies with it which some believe would accelerate already decreasing reductions of carbon emissions. But, both the California’s Breakthrough Institute and the Joint Program on the Science and Policy of Global Climate Change at the Massachusetts Institute of Technology find it will do very little in additional reductions. The Breakthrough Institute found that carbon taxes would decrease emissions marginally with an economic cost that could reach 900 percent more than current subsidies. The MIT study found that without best-case economic growth, emissions would decrease only slightly more than current assessments.

Another argument is that revenues from a carbon tax would go to deficit reduction. According to an economic study by Capital Alpha Partners, carbon-tax revenues in early years, when rates are low, are estimated at $153 billion to $459 billion. Federal corporate tax receipts currently are about $118 billion. These numbers demonstrate the huge burden that a carbon tax would be on American businesses and consumers to whom the taxes would be passed onto. The burden would be felt by everyone who uses energy including schools, hospitals, police and fire fighters that are very basic needs of American society. 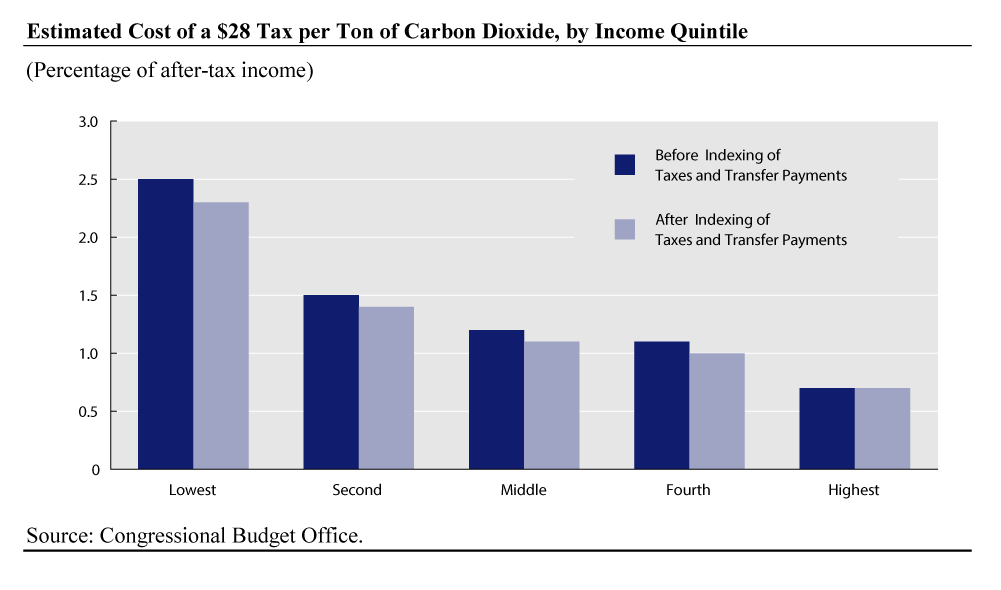 The purpose of a carbon tax is to increase the costs of using  oil,, natural gas and coal that support more than 10 million American jobs so that other, more expensive and less economically competitive sources of energy will replace conventional sources. U.S. manufacturing is critical to American security and prosperity and relies on abundant, reliable and inexpensive energy; increasing the costs of those energy supplies slows economic and job growth. Our small-businesses provide 1 in 6 private-sector jobs according to the National Association of Manufacturers, and these jobs would be at risk if a carbon tax were enacted.

Further if we were to put a price on carbon and China and other competitors did not, the Chinese would effectively receive a huge export subsidy. The main reason global carbon emissions have been going up is the global increase in coal use, particularly in China. Coal now supplies 30 percent of the world’s energy, up from about 25 percent in the mid-1990s. China now uses 4 times as much coal as the United States. As the developed world makes choices to move  toward more expensive renewable energy as Europe is doing, energy-intensive industries are leaving their shores, where their products are manufactured and imported back to consumers at home.[x] Therefore, policies that mandate reductions in emissions in the developed world via higher cost energy result in industries moving offshore where energy is less expensive and less clean so that the goods produced can be bought by the countries with the higher energy costs. Does this make sense?

Politicians like scapegoats and pointing fingers at the weather or federal policies may shield them from more appropriate local criticism of their own failure to adequately respond to emergencies as a way to quiet the anger of their voters. But it doesn’t solve anything more than the politicians’ immediate problems; weather events have taken vast tolls on human life over the millennia and unfortunately will continue to do so.  As data have shown, as we have gotten wealthier, the death toll has declined.

“ … to connect energy policy and disasters makes little scientific or policy sense. There are no signs that human-caused climate change has increased the toll of recent disasters, as even the most recent extreme-event report of the Intergovernmental Panel on Climate Change finds. And even under the assumptions of the IPCC, changes to energy policies wouldn’t have a discernible impact on future disasters for the better part of a century or more. The only strategies that will help us effectively prepare for future disasters are those that have succeeded in the past: strategic land use, structural protection, and effective forecasts, warnings and evacuations. That is the real lesson of Sandy.”[xi]