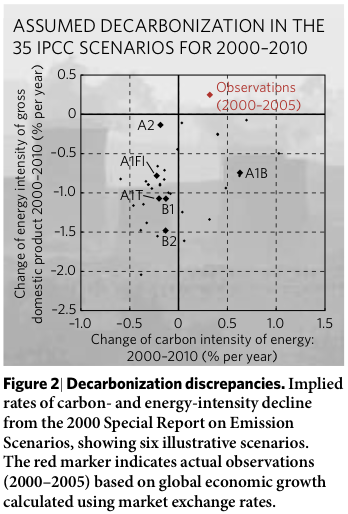 What if estimates of the rate of spontaneous decarbonization are wrong? Roger Pielke Jr., at the Center for Science and Technology Research at the University of Colorado, Boulder, calculates that if we don’t assume there will be spontaneous decarbonization, reducing carbon dioxide concentrations in half will cost between $255 and $545 trillion. This is far more than IEA’s estimate of $45 trillion.

An Unpredictable Future. If one looks at the decarbonization of the U.S. economy, it seems safe to project sponteanous decarbonization into the future. But this might not be the case everywhere in the world or for the world as a whole. According to Pielke Jr., Wigley, and Green:

the IPCC assumptions for decarbonization in the near term (2000-2010) are already inconsistent with the recent evolution of the global economy (Fig. 2). All scenarios predict decreases in energy intensity, and in most cases carbon intensity, during 2000 to 2010. But in recent years, global energy intensity and carbon intensity have both increased, reversing the trend of previous decades.

Figure 2 above is from Pielke Jr., Wigley, and Green’s paper in Nature. It shows that the observations from 2000-2005 buck the global trend of lower energy intensity per unit of GDP.

Will this continue into the future? No one knows. If it does, it will cost far more than IEA’s estimate of $45 trillion to cut carbon dioxide levels in half. Because the future is unpredictable, we should pay close attention to Pielke Jr, Wigley, and Green’s conclusion:

IER Calls on Bush to Tear Up Executive Drilling Ban