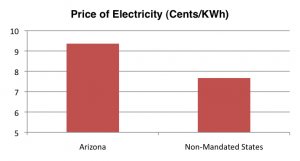 Renewable Mandate Status: Not on Track

Noncompliance penalty: The inability to recover costs due to the act’s enforcement. The Corporation Commission, however, can waive compliance for “good cause.”[vii]

[i] Energy Information Administration, Electricity Generation 2009, http://www.eia.doe.gov/cneaf/electricity/epa/ generation_state_mon.xls. Arizona law limits eligible hydroelectric, but includes hydroelectric used to “firm or regulate intermittent renewable sources” like wind and solar, but they have not published any reports on the amount of hydroelectric produced that is used under this standard. Arizona did not respond to repeated attempts to clarify their standard.