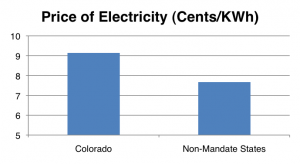 Renewable Portfolio History: Colorado was the first US state to create a RPS by ballot initiative in November 2004. This initiative originally required utilities serving 40,000 or more to generate or purchase renewable-energy for 10% of sales. HB 1281 in March 2007 increased the RPS and extended requirements to cooperatives. HB1001 in March 2010 increased RPS for investor-owned utilities to 30% by 2020.[iii]

Noncompliance penalty: The PUC determines how much compliance would have cost and requires to the utility to pay that amount, but the utility may not recover the cost from customers.[v]