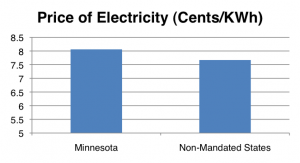 Renewable Portfolio History: Originally had a non-mandated renewable energy objective. Enacted RPS in February 2007 (a standard for Xcel and a separate standard for all other electric utilities); this legislation also set another non-mandated “good faith” goal of 1% by 2005 and 7% by 2010[iv].