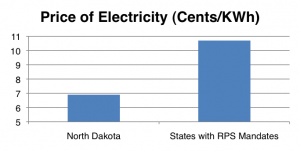 Renewable portfolio history: on 2007, North Dakota passed (H.B. 1506) that established a non-binding, voluntary target that by 2015, 10% of all retail electricity sold in the state would be obtained from renewable energy and recycled energy.[iii] The objective must be measured by qualifying megawatt-hours (MWh) delivered at retail or by credits purchased and retired to offset non-qualifying retail sales.(2)