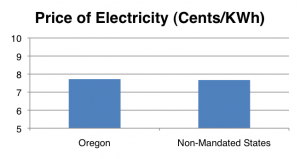 Renewable portfolio history: Senate Bill 838 of 2007 established the RPS in Oregon.[iv] The legislation also established a goal that by 2025 at least 8% of Oregon’s retail electrical load comes from small-scale, community renewable energy projects with a capacity of 20 megawatts (MW) or less. In fact, the legislation modified Oregon’s public purpose charge for renewable resources to focus on smaller projects of 20 MW or less and extended the sunset date on the public purpose charge through 2025.[v]

[i] According to Kip Pheil from the Oregon Department of Energy.