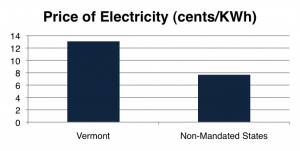 Renewable Mandate Status: Not on Track

Renewable portfolio history: Vermont’s Sustainably Priced Energy Enterprise Development (SPEED) Program was created by the Vermont Legislature in 2005.[iv] It is not an RPS or goal, which promotes renewable energy development by encouraging long-term contracts for electricity from renewable sources.[v] Legislation made by Vermont in 2008 established the goal of 20% of total statewide electric sales be made of renewable sources by June of 1017.[vi] Minimum obligation: (1) any increase in retail electric sales between 2005-2012 that is also at least 5% of 2005 sales; OR (2) 10% of retail sales in 2005.