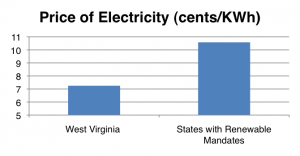 [i] West Virginia’s alternative energy mandate has no penalties and includes non-renewable resources, which makes it effectively a goal

[ii] According to Jeff Herholdt of the West Virginia Division of Energy.

[viii] This includes all states with minimum renewable requirements