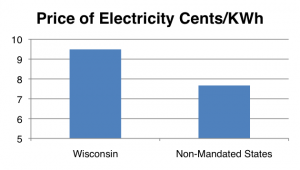 Renewable Mandate Status: Not on track

Renewable portfolio history: Wisconsin Legislature passed Act 9 in 1999, becoming the first state to put in place a renewable portfolio standard (RPS) without having restructured its electric-utility industry.[iv] 1999 Wisconsin Act 9 created RPS and was designed to sell a certain minimum amount of renewable electricity as a percentage of total electricity a utility or cooperative sells. The RPS established by Act 9 would reach its maximum at 2.2% (of total electricity a cooperative or utility sells) in 2011.[v] The 2005 Wisconsin Act 141 builds upon the 1999 Act and set the standard of 10% state wide USE of electricity being from renewable sources.[vi] In 2010, Wisconsin legislature broadened the definition of renewable energy to include energy-from-waste projects as eligible for renewable energy credits[vii]

Noncompliance penalty: The law has no penalty for noncompliance. However, anyone who provides “false or misleading certification information regarding the sources or amounts of renewable energy supplied at wholesale to the electric provider shall forfeit not less than $5,000 nor more than $500,000.”[viii]