Without much fanfare, the Department of Energy (DOE) recently updated the list of loan guarantee projects on its website. Unlike in 2008, when Barack Obama pledged to create 5 million jobs over 10 years by directing taxpayer funds toward renewable energy projects, there were no press conferences or stump speeches. But the data are nonetheless revealing: for the over $26 billion committed since 2009, DOE Section 1703 and 1705 loan guarantees have created only 2,298 permanent jobs – that’s $11.45 million per job. 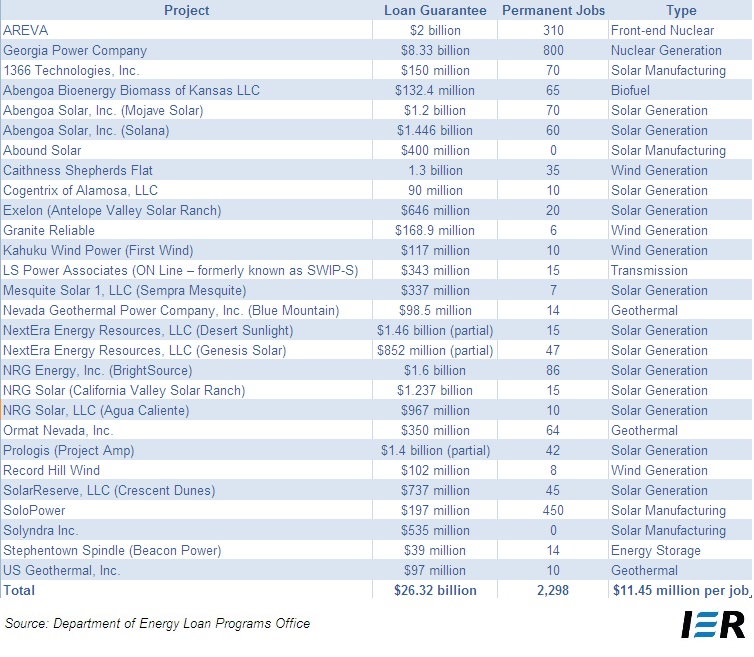 As the astronomical taxpayer exposure from the DOE’s loan guarantee program indicates, subsidizing renewable energy is not a good deal for taxpayers. But loan guarantees are just one of the ways the federal government bankrolls risky green energy projects. Energy-related tax preferences cost taxpayers about $13.5 billion in FY 2012, according to the Joint Committee on Taxation. But solar and wind power, for which the majority of the tax preferences for renewable energy were directed, produced only 3.6 percent of the nation’s generation in 2012. In addition, the Treasury Department’s 1603 grant program, which offers cash payments to renewable energy companies, cost taxpayers $5.8 billion in 2012. Many states also subsidize green energy through tax preferences as well as requiring renewable electricity mandates that require a specified amount of electricity to be generated from qualified renewable sources like wind and solar.

Clearly, in terms of “bang for the buck,” government programs that coddle renewable energy are losers. In terms of jobs, the losers are the American workers who would otherwise be gainfully employed but for the tremendous waste of taxpayer dollars on the administration’s obsession with “green energy.” As the economy continues to suffer and dollars for federal programs get harder to come by, it is getting increasingly difficult to defend a program that costs so much and produces so little.