Coda Holdings Inc., an electric car company in Los Angeles, California, has filed for bankruptcy after a 4-year start-up and after selling less than 100 electric cars.[i] The Coda Car, an all-electric four-door sedan, has an EPA-rated battery range of about 88 miles.[ii] Coda’s problems, like other electric car companies such as Fisker Automotive and Tesla Motors, is that the American public is just not interested in electric vehicles given their high prices, short vehicle range on a charge, difficulty in finding charging stations, and questionable economics of fitting their homes with charging stations, among other negative attributes such as small trunk space. These attributes and charging station issues limit the car’s use and popularity. 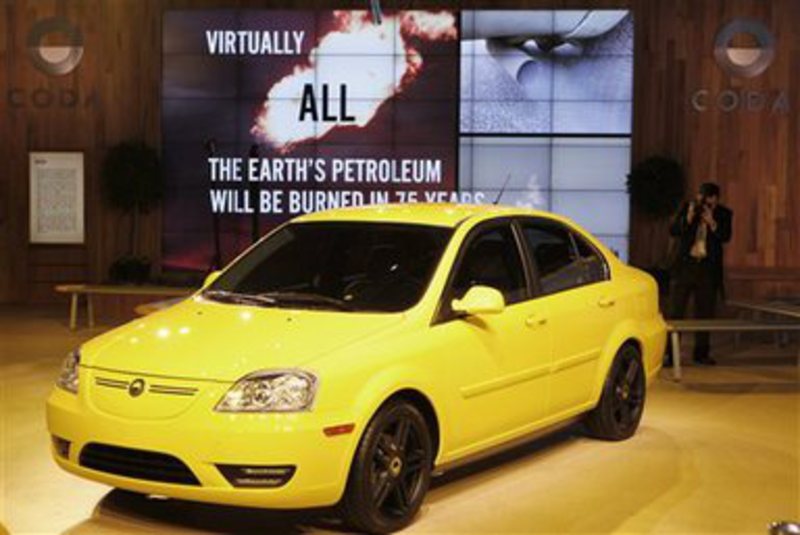 Coda’s electric sedan was thought to be an all American vehicle, but was mainly produced in China where labor rates are less. Only the power trains were installed in California.

The intent of the company was to sell 10,000 vehicles and merge into a growing electric car market. But that market has not materialized.[iii] Coda’s 5-passenger vehicle had been on the market since March 2012, with a list price of $37,250, but the company delivered at most 78 vehicles, according to the National Highway Traffic Safety Administration, which issued a recall notice on improperly installed side air bags. At the time of its bankruptcy filing, Coda’s assets totaled no more than $50 million and its liabilities were up to $100 million.[iv]

Coda’s sales were not helped by the fact that the vehicle was based on a years-old design and was panned for its bland styling. Other reviews stated that the car did not handle well.

The company is now thinking of exiting the automobile industry, instead preferring to license its battery technology to the electric utility industry for battery energy storage. Coda Holdings Inc. stated on its website that it was focusing its business strategy “on the growing energy storage market,” and hoped to complete the sale within 45 days.[v] According to the company, a consortium led by Fortress Investment Group has provided funding to enable Coda’s energy storage business to remain functional during the restructuring. The Fortress Investment group has also filed a $25 million bid to acquire that part of Coda.

The electric car market is not prospering because car buyers are not interested in spending tens of thousands of dollars on cars with short histories and uncertain futures. In the past, even traditional carmakers have struggled when one considers the demise of the Oldsmobile and Plymouth lines, among others. Electric carmakers have to find their niche in the market–buyers who are willing to accept the risks and like the benefits of owning a rarity. Those buyers tend to be wealthier Americans, not the average middle class buyer looking for reliability, safety, range, spaciousness, utility and economics. Those wealthier Americans can afford a top of the line electric vehicle such as a Tesla or a Fisker. But even Fisker Automotive has failed with its pricey $100,000 Karma that flunked a Consumer Reports road test. Unlike Fisker or Tesla Motors, Coda did not receive any government loans.[vi]  Its purchasers, however, received a $7,500 federal tax credit and a $2,500 rebate from California, the only state where the car was sold. [vii]

But like Fisker car owners, people who have bought Codas now have a problem with obtaining parts and repairing their vehicles, despite their reduced upfront costs because of government tax benefits. They can thank President Obama with his ambitious untested policies of getting a million electric vehicles on the road by 2015—which is now just a pipe dream.  Meanwhile, over 645,000 Ford F-150 pickup trucks were sold in 2012, during a year when average gas prices were the highest ever recorded.[viii]

The Department of Energy Committed $11 Million Per Job