An important statistic in the historiography of climate policy compares the global market share of fossil fuels from 1988 (the beginning year of the climate debate) to today.

How has global warming politics changed global energy usage in the last 30 years? Restated, how much fossil-fuel demand has been redirected by climate policies?

The first chart below shows the steadiness of carbon-based energy since the 1980s with the balance divided between carbon-free energies. 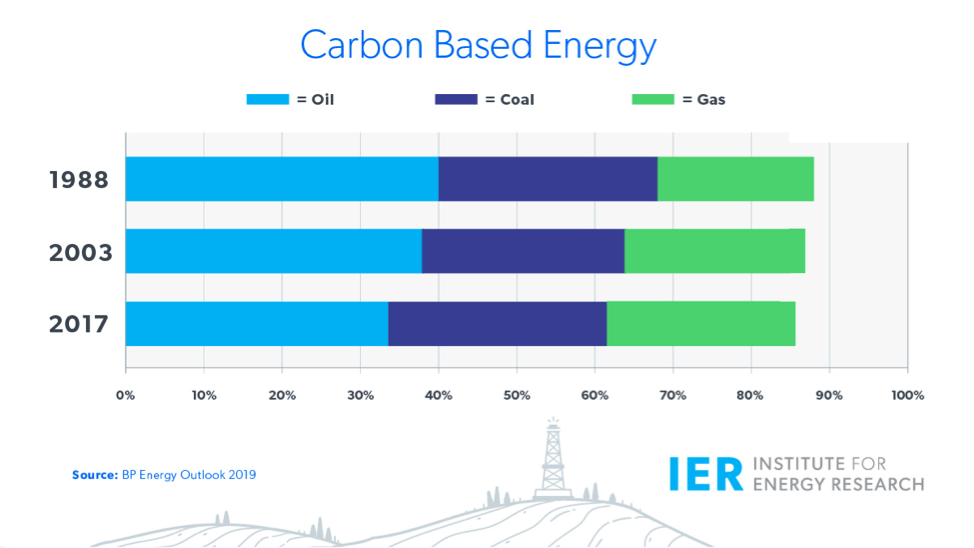 Overall, fossil fuels fell from an 88 percent share in 1988 to 85 percent today, suggesting a floor of 80 percent going into the next years if not decades. According to the BP Energy Outlook, world coal has remained steady at 28 percent of total primary energy usage, while natural gas rose to 23 percent (from 20 percent), a 15 percent gain. Oil’s market share dropped from 40 percent to 34 percent, mostly attributable to lost demand in the industrial/power plant market.

The second chart shows the composition of non-carbon-based energies (renewables and nuclear power), accounting for 11 percent in 1988. With the growth of non-hydroelectric renewables (primarily wind and solar power), this share grew to 15 percent in the most recent year. 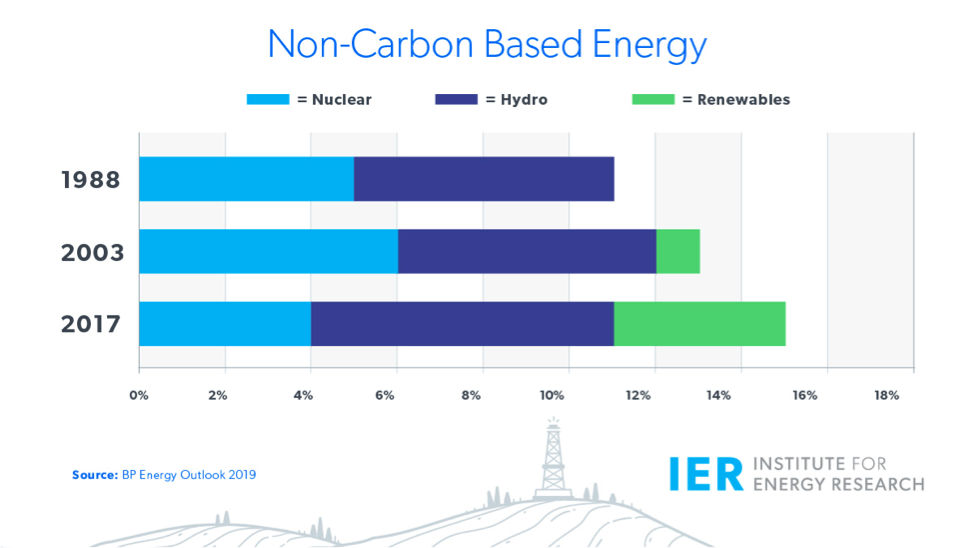 Globally, hydroelectric generation increased its share of total primary energy consumption to result in a net gain for carbon-free energy despite a marked fall in nuclear generation. Non-hydroelectric renewables had a market share of 3.6 percent in 2017, despite contributing almost nothing to global consumption in 1988.

Another way to assess thirty years of activist public policy versus consumer demand is to look at total fossil-fuel consumption and carbon dioxide emissions. Between 1988 and 2017, according to BP’s Statistical Review of the World, carbon-based energy usage increased 66 percent, while CO2 emissions rose by slightly less­—61 percent.

After three decades of debate and politics, carbon-based energies continue to predominate over highly subsidized and mandated alternatives. Growing world demand and improving technology from extraction to combustion have overcome political interference, as it were. This story is unlikely to change much in the next decades.