The Government Accountability Office (GAO) recently issued its third annual report exposing unnecessary duplication and overlapping programs throughout the federal government.[i] The report outlines more than $95 billion spent per year on duplicative programs and inefficient practices that is more than enough to offset the costs of sequestration. GAO identified 17 areas in which evidence of fragmentation, overlap, or duplication among federal programs or activities exists, covering a broad range of government missions and functions, including international affairs, science and the environment, training, defense, information technology, agriculture, and energy.

In the energy area, the report identified 679 renewable energy initiatives at 23 federal agencies and their 130 sub-agencies where federal support is fragmented, costing taxpayers $15 billion in fiscal year 2010, the latest year for which GAO developed the data. Also, GAO found that several wind initiatives received financial support that may not have been needed in order for the projects to be built. In other words, the projects would have been built without using taxpayers’ money. 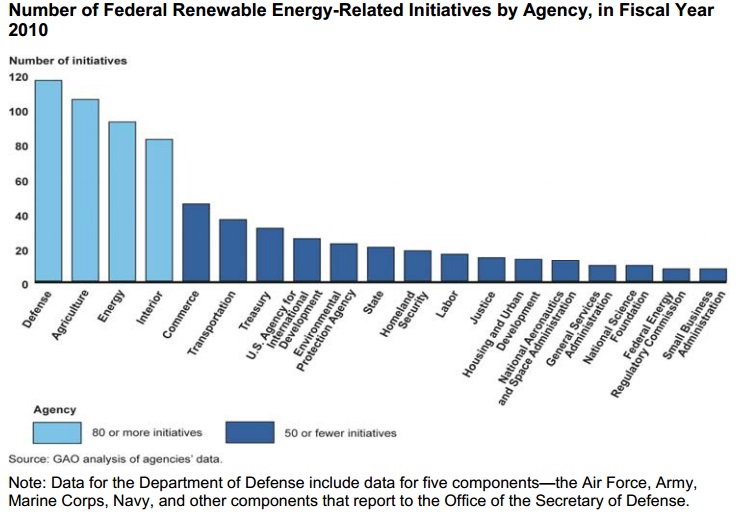 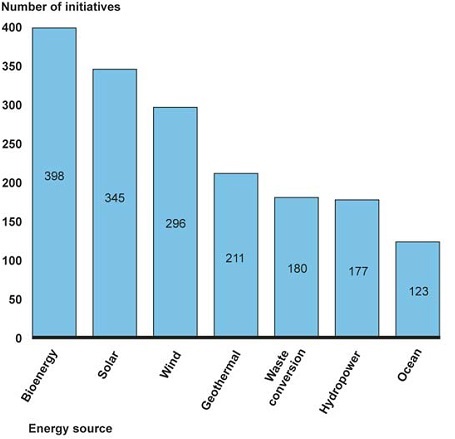 GAO found that nine agencies implemented 82 wind-related initiatives that had overlapping characteristics in fiscal year 2011.[iv] The initiatives supported a range of wind issues, including generation from land-based or offshore wind, transmission of wind energy, and technology advancement activities from basic and applied research to deployment. Under these initiatives, agencies incurred obligations of about $2.9 billion and provided estimated tax subsidies totaling at least $1.1 billion for activities specifically related to wind in fiscal year 2011. Several of these 82 wind-related initiatives provided duplicative financial support to deploy wind energy projects, which GAO reported may not have been needed for the projects to be built.

Of the 82 initiatives, 68 of them overlapped to some degree with at least one other initiative because they shared key characteristics such as supporting the same technology advancement. In evaluating the wind-related initiatives, GAO identified seven initiatives that provided duplicative support in that financial support was provided from multiple initiatives to the same recipient for a single project. These seven initiatives included tax expenditures, and grant, loan, and loan guarantee programs implemented by the Departments of Treasury, Energy (DOE), or Agriculture (USDA). For example, projects supported by Treasury’s Section 1603 program also received support from DOE- or USDA-administered loan guarantees, as well as tax expenditure support.

Number of Federal Wind-Related Initiatives by Agency, in Fiscal Year 2011 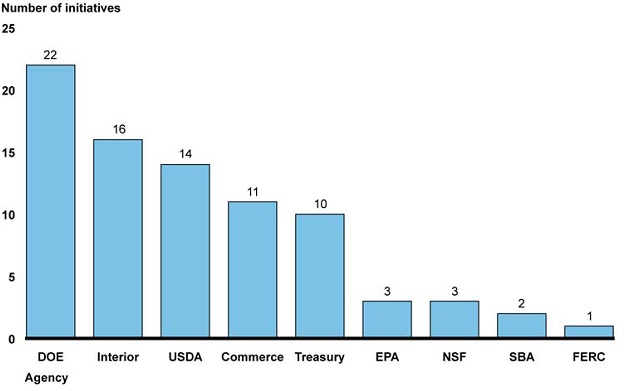 Wind projects also receive financial support from state tax credits and grant and loan programs, as well as indirect support from state policies, such as renewable portfolio standards, requiring a specified amount of electricity to be generated from qualified renewable sources by certain specified dates. Such mandates are the ultimate economic benefit to a producer of renewable energy, in that they artificially create a market by compelling consumers to buy the company’s products.  In addition, duplication of financial support among these initiatives may not be limited to wind projects because the initiatives also provided support to projects involving a range of other renewable energy sources.

Because agencies do not document their assessments of the applicant’s need for financial support, GAO was unable to determine the extent to which the agencies use assessments of applicants’ need to determine the amount of support to provide under their initiatives. Thus, the extent to which applicants’ need influenced agency decisions is unclear, both in terms of whether the project should be supported and in terms of the amount of support. In particular, GAO reviewed briefing memorandum from White House staff, DOE documents, and other documentation related to two wind projects where the agencies’ wind initiatives supported projects that may have been built without their support.

In many cases, the wind financial initiatives GAO identified providing duplicative support covered about half of the project costs. The Shepherds Flat wind project is an example where White House staff knew that the cumulative financial support being provided to this wind farm would subsidize almost 65 percent of the project’s cost.[v] This was documented by a White House memorandum where its authors (Larry Summers, Ron Klain, Carol Browner)[1] indicated that Shepherds Flat would receive $1.2 billion in government subsidies for a $1.9 billion project, while guaranteeing a 30-percent return on equity to private companies.

The Shepherds Flat wind project is an 845-megawatt wind farm in Oregon, consisting of 338 GE wind turbines manufactured in South Carolina and Florida. Once built, it would be the largest wind farm in the country. The sponsor’s (Caithness Energy and GE Energy Financial Services) equity is about 11 percent of the project costs, but the project would generate an estimated return on equity of 30 percent.

The memorandum excerpts described below explains that the Office of Management and Budget (OMB) and the Department of Treasury were concerned about three problems with the loan guarantee program: “double dipping” (massive government subsidies from multiple sources), lack of “skin in the game” from private investors and ”non-incremental investment,” the funding of projects which would occur even without the loan guarantee.

Double dipping: The total government subsidies are about $1.2 billion from 5 different incentives.

Non-incremental investment: This project would likely move without the loan guarantee. The economics are favorable for wind investment given tax credits and state renewable energy standards. GE signaled through Hill staff that it considered going to the private market for financing out of frustration with the review process. The return on equity is high (30 percent) because of tax credits, grants, and selling power at above-market rates, which suggests that the alternative of private financing would not make the project financially non-viable.

Carbon reduction benefits: If this wind power displaced power generated from sources with the average California carbon intensity, it would result in about 18 million fewer tons of carbon dioxide emissions through 2033. Carbon reductions would have to be valued at nearly $130 per ton carbon dioxide for the climate benefits to equal the subsidies (more than 6 times the primary estimate used by the government in evaluating rules).

With regard to Shepherds Flat, taxpayers were expected to fund by far the largest share of the bills and the risk and in return receive only miniscule benefits in terms of reduced greenhouse gases. In contrast, the corporations behind the project, who were not taking much of the risk, would profit handsomely. Despite understanding that a loan guarantee for the Shepherds Flat project was unnecessary, the administration approved the loan guarantee anyway.

According to Senator Tom Coburn, “While millions of Americans have been doing more with less, the federal government continues to do less with more. The $95 billion in overlap identified in this report, combined with the $200 billion in overlap identified in GAO’s previous two reports, could easily cover the costs of sequestration. Yet, instead of preventing furloughs, reopening air traffic control towers and restoring public access to White House, Congress and the administration continue to defend billions of dollars in duplicative programs that are little more than monuments to the good intentions of career politicians in Washington.”

[1] At the time, Summers was the Chairman of the National Economic Council, Klain was Vice President Biden’s Chief of Staff, and Browner was the White House Energy and Climate Change Advisor.