The White House has released its FY 2014 Budget Proposal. It is a mix of massive tax hikes on the most productive segments of our economy, and a continuation of wasteful subsidies to sectors that fail the market test. Adding insult to injury, even its alleged “balanced mix” of tax hikes and spending restraint don’t seriously address the nation’s fiscal imbalances. When it comes to energy policy specifically, here again the White House proposes to stick it to the efficient producers while lavishing mandates and taxpayer support on those technologies and fuels that would never survive on a level playing field.

As IER is dedicated to energy issues, that will form the bulk of our analysis. Yet it’s worth making some quick observations on the general scope of the White House Budget.

The Budget section dealing with deficit reduction says on the very first page that “$580 billion in additional revenue relative to ATRA [American Taxpayer Relief Act]” comes “from tax reform that closes tax loopholes and reduces tax benefits for those who need them least.” In other words, more than half a trillion dollars over the next decade alone will be extracted from the people who produce the most in the U.S. economy. If we are trying to expand production and spur job creation, does that seem like a good idea?

Progressives like to pooh-pooh the notion that raising marginal income tax rates has any effect on the economic activity of “the rich.” And yet, we know that progressives are big fans of carbon taxes, gas taxes, and cigarette taxes, all as ways of molding people’s behavior into their preferred pattern. If a carbon tax will cause people to emit less CO2, what will a tax on work do?

Incidentally, the $580 billion in tax hikes are new proposals, to be laid on top of what’s already been shelled out. As the document explains:

Over the past few years, Democrats and Republicans have cut the deficit by more than $2.5 trillion through a mix of spending cuts and tax reform, including more than $1.4 trillion in spending cuts…and over $600 billion in new revenue in the American Taxpayer Relief Act (ATRA) from raising income tax rates on the highest income Americans. [Bold added.]

Incidentally, there are many conservative, free-market economists who champion the idea of reforming the tax code through broadening the base—i.e. “closing loopholes.” But if the point is to promote economic efficiency, then broadening the base needs to be in conjunction with eliminating tax brackets and lowering the top marginal rate, so that total revenues don’t go up. The White House’s notion of “tax reform” is nothing like that recommended by a fiscal conservative interested in supply-side incentives.

Yet it gets worse. Even with the massive tax hikes—both already enacted and now being proposed—look at the White House’s own projection of the fiscal situation over the next decade (from Table S-1, page 183, in this Appendix):

Even on paper—in their own unrealistic, back-patting, rosy scenario—the White House projects that under its Budget Proposal, the lowest the federal deficit will be over the next decade is $439 billion, and that low point doesn’t happen till 2023. Over the whole period, the plan calls for a cumulative $5.3 trillion to be added to the federal debt.

But wait, might it be misleading to focus just on the absolute numbers? Shouldn’t we look at the size of the economy too? Sure thing. The standard figure that economists use is “Debt held by the public as a share of GDP.” And as the White House’s own forecast shows, by 2023 that measure is still worse (at 73.0%) than it was in 2012 (72.6%). Remember that Obama officials explained during the first term that the massive deficits were a “temporary emergency measure” due to the financial crisis. And yet, they don’t even pretend to make progress on the debt over the next ten years.

Of course, in practice the debt situation is much worse than what the table above suggests. For one thing, look closely at the nominal (not inflation-adjusted) GDP figures. They constantly grow over the entire decade, averaging about 5 percent per year. Does anyone really think the U.S. economy is in shape right now for such a rapid recovery, and then it will be smooth sailing for a full decade?

The very first page of the Department of Energy section shows that the Obama Administration is pursuing the same flawed strategy of raising taxes on the energy sources that are actually efficient, while throwing more money at things that need government support. For example, the Budget contains:

If we turn back to the deficit reduction document, there is an entire section devoted to, “Reform Federal Oil, Gas, and Coal Management.” One component of this reform involves increasing leasing revenues. Now we’re talking! We at IER have been arguing that expanded access is a win-win outcome too. Let’s see what the Obama Administration has in mind:

Proposed changes include royalty reforms and incentives to diligently develop leases, such as shorter primary lease terms, stricter enforcement of lease terms, and monetary incentives to get leases into production through a new per-acre fee on nonproducing leases.   Revenue collection improvements include simplification of the royalty valuation process, elimination of interest accruals on company overpayments of royalties, and permanent repeal of DOI’s authority to accept in-kind royalty payments.  States will also be asked to help pay for the costs of administering energy and mineral receipts…Collectively, these reforms will generate over $3 billion in net revenue to the Treasury over 10 years.

As this description makes clear, they are planning on tightening the screws on the leasing process, in order to squeeze out a little more money, rather than opening the floodgates by fast-tracking the development of U.S. energy resources. In Joseph Mason’s recent study, he found that in the first 7 years a change in leasing policy could bring in $36 billion in additional federal receipts. Compare that to the $3 billion over 10 years proposed by the Obama Budget.

Here’s a nice chart to remind us of the Obama Administration’s leasing policies: 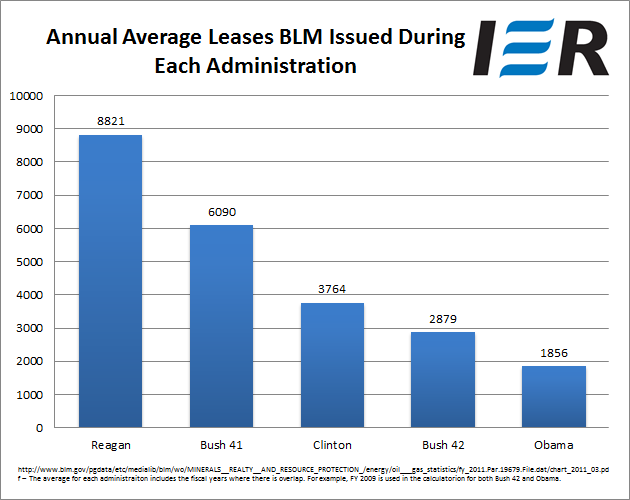 With the embarrassing bankruptcies of Solyndra, Beacon Power, et al., and with the obvious solution of bountiful energy deposits staring them in the face, one might have supposed that the Obama Administration would seriously cut the deficit by eliminating funding for energy boondoggles, and letting more energy companies pay the Treasury for the privilege of bringing down gasoline prices for American motorists.

Alas, the Obama 2014 Budget proposes the exact opposite: Even on its own, rosy scenario terms, it merely treads water on the debt, while raising taxes on the very people and firms who are producing the most in today’s weak economy. At the same time, it drastically increases spending on support for “green” energy plans that make little sense in theory, let alone in practice.

The President’s Messaging At Work