On Sunday, May 8, renewable energy supplied 87 percent of Germany’s electricity. Around 1 pm on that day, the country’s solar, wind, hydroelectric and biomass plants supplied about 55 gigawatts of the 63 gigawatts needed to meet demand. As a result, power prices went negative for several hours, meaning commercial customers were being paid to consume electricity.[i] (See chart below.) The system’s natural gas plants were taken off line, but its coal and nuclear plants could not be quickly shut down and had to pay to sell power into the grid for several hours. That meant industrial customers such as refineries and manufacturers earned money by consuming electricity. 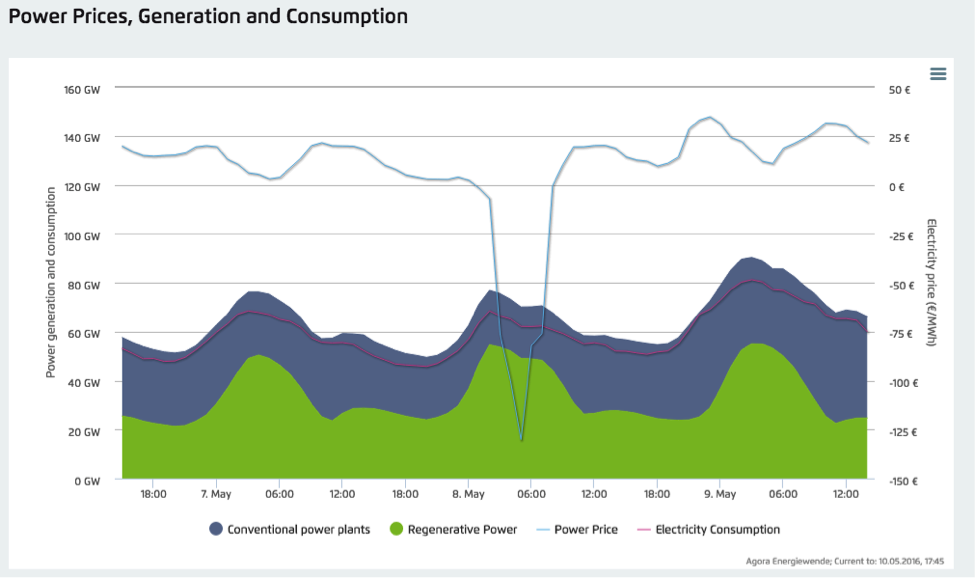 The destabilization of the power grid has made Germany reform its renewable energy law aimed at curbing the costs and controlling the speed of the future roll-out of green power sources. The government is planning to limit the expansion of onshore wind to 2.8 gigawatts of capacity per year, equivalent to about 1,000 wind turbines. Solar power would be limited to 600 megawatts, but installations smaller than 750 kilowatts will continue to receive support to encourage solar rooftop panels. And, only a certain amount of new capacity will be permitted in north Germany to avoid overburdening the electricity grid. The government hopes to approve the proposals in the coming weeks and have the plan come into force at the start of 2017.[ii]

Germany has plans to have its electricity be 40 to 45 percent renewable by 2025 with most of it being wind and solar power. However, there are problems that result from encouraging so much intermittent renewable energy onto the grid that will need to be resolved before such a transformation can take place. The German utility system is experiencing these problems now and limiting intermittent renewable expansion to counter some of them.

[i] Quartz, Germany had so much renewable energy on Sunday that it had to pay people to use electricity, May 10, 2016, http://qz.com/680661/germany-had-so-much-renewable-energy-on-sunday-that-it-had-to-pay-people-to-use-electricity/