California is again having issues with adequate electricity and its customers are being told that summer blackouts may occur. Its utility scale generation is dependent primarily on natural gas and renewable generated electricity. California decided years ago that it would not build any coal-fired power plants and gets just 0.2 percent of its generation from a few coal units it still has on-line. (It should be noted, however, that California consumes electricity from coal generated out of state and imported to southern California–up to 50 percent at times.[i]) The state retired two of its nuclear units in 2013 and is expected to retire its last two operating nuclear units over the next decade when their nuclear licenses expire, eliminating 9 percent of its carbon free electricity. California has mandated that 50 percent of its electricity come from renewable fuels by 2030, currently getting 30 percent of its utility scale electricity from renewable fuels and 59 percent from natural gas. 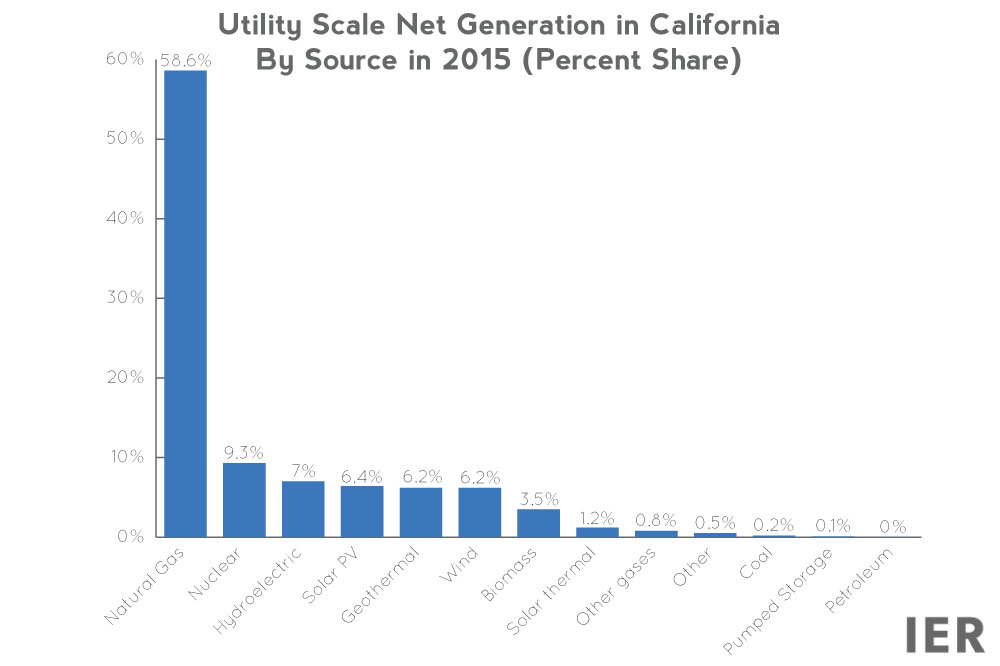 Last Monday, the California Independent System Operator (ISO) asked the electricity consumers in Southern California to conserve electricity especially during the late afternoon when air conditioners typically are at peak use, warning that natural gas supplies may be tight because of limited operations at a gas storage facility in the region. The Flex Alert was issued from 10 am to 9 pm because high temperatures were expected.[ii]

Last Monday was only the start of what is expected to last a possible 14 days over the summer. To avoid blackouts, consumers are being asked to conserve electricity because without conservation, power plants could run out of natural gas fuel and trigger rolling blackouts. Southern California is short of natural gas due to a gas leak that occurred last winter at the state’s largest underground gas-storage facility, Aliso Canyon. Southern California uses a system of electric transmission lines, gas pipelines and gas storage facilities that must all run smoothly to get sufficient electricity. If any part is disabled, electricity shortages can result. As an example, the pipelines only supply about 3 billion cubic feet of natural gas a day, which is below the daily demand that can reach as high as 5.7 billion cubic feet–almost twice the daily supply of pipeline capacity, which is why storage facilities are needed.[iii]

Regulators and utility executives are taking emergency actions that include 18 relief measures, such as better coordination of maintenance for gas pipelines and electrical transmission lines, and lining up unconventional resources, like battery storage of electricity, to take pressure off gas-generating plants. The Los Angeles Department of Water and Power, the nation’s biggest municipal utility, is signing contracts for space on electrical transmission lines to import more electricity in case it does not receive enough natural gas to keep power plants operating. Air quality regulators will also allow the utility to violate pollution rules this summer by burning diesel fuel at three of its four power plants if that is the only way to prevent blackouts.[iv]

Though the Aliso Canyon leak was fixed in February, the facility is out of commission while over a hundred wells undergo tests to determine if they contain hidden defects. The facility is one of nearly 400 gas-storage facilities in the United States, occupying depleted oil fields, aquifers or underground salt caverns. The tests are expected to be completed by late summer.

Pacific Gas & Electric Co. announced last week that it will close the two units at its Diablo Canyon nuclear plant within the next decade and develop more solar, wind and other renewable technologies. The Diablo Canyon nuclear plant provides 2,160 megawatts of electricity for Central and Northern California, generating more than 9 percent of the state’s electricity—all of which is carbon free. The plant is to be retired after its current U.S. Nuclear Regulatory Commission (NRC) operating licenses expire in November 2024 and August 2025. This is despite the NRC concluding that the nuclear plant ranks among the top facilities of its kind in the country. According to the NRC, in 2015 and the first half of this year, the twin-reactor plant was operated by the electric company in a “manner that protected public health and safety” and met the NRC’s cornerstone safety objectives.[v]

The power produced by Diablo Canyon’s two nuclear reactors is to be replaced by energy efficiency, renewables and energy storage. According to a report from Bloomberg Intelligence, PG&E’s plan will cost $15 billion and Bloomberg has historically been very sympathetic to renewables.[vi] The proposal, however, is contingent on a number of regulatory actions that include approvals from the California Public Utilities Commission.[vii] Adding these costs to consumers’ bills may also create concerns.

California’s nuclear renaissance began in the late 1950’s with a few small reactors. Its largest reactors were two of the San Onofre units, retired in 2013, and the Diablo Canyon reactors—all four of which were built in the mid-1980s. (See table below.) 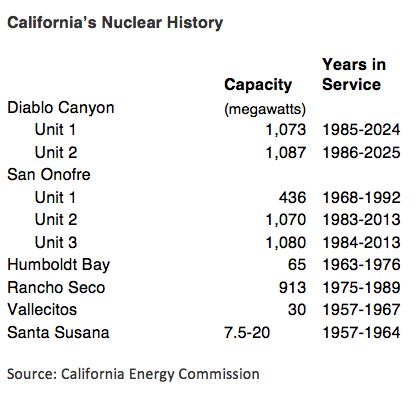 Once Diablo Canyon closes, California will get a small percentage of its electricity from imported nuclear power from Arizona’s Palo Verde 4,000-megawatt nuclear plant. Southern California Edison, the Los Angeles Department of Water and Power, and the Southern California Public Power Authority are part owners of the plant. Washington State will then have the only remaining nuclear plant on the west coast–the Columbia Generating Station—located in south central Washington.

California’s utility system is so tight and complex that it is vulnerable to rolling blackouts if part of the system is down—in this case, its largest natural gas storage facility. (This is despite the fact that California’s outward migration has exceeded its inward migration for 22 of the past 25 years.[viii]) The pipeline system is not adequate to supply enough natural gas to meet daily demand that can be almost twice what can be brought in daily. Thus, the state must institute emergency measures to avoid blackouts, and called on consumers to conserve electricity last week. Over the next decade, it will exacerbate the problem by retiring its two remaining nuclear units, which generate over 9 percent of the state’s electricity.

California has mandated that 50 percent of its electricity come from renewable energy by 2030, despite the fact that the state is getting much less than the intended energy from its Ivanpah Solar Electric Generating System[ix] and replacing the electricity from Diablo Canyon will be very expensive. Its emergency measures include using diesel fuel; they do not seem to include ramping up the state’s renewable generation because much of that is dependent on the sun shining and the wind blowing. California has been designing through regulation and mandates an electricity system largely dependent on the weather. Time will tell how this experiment works out.