Offshore oil production is finally rebounding from the moratorium and “permitorium” that President Obama instituted in 2010 when the Deepwater Horizon accident occurred in the Gulf of Mexico. Production from offshore oil fields is partially offsetting declining output from shale regions onshore where oil producers have cut back production due to lower oil prices.

Offshore oil production in 2015 was just 1.3 percent below its 2009 peak and is expected to exceed that peak this year and next, according to the Energy Information Administration (EIA). Because it can take 7 to 10 years or more to start an offshore oil field, a number of large oil fields under development years ago are just now beginning to pump oil. Companies are also finding that smaller satellite fields can be tapped relatively cheaply by linking them to existing offshore oil platforms by way of underwater pipelines. 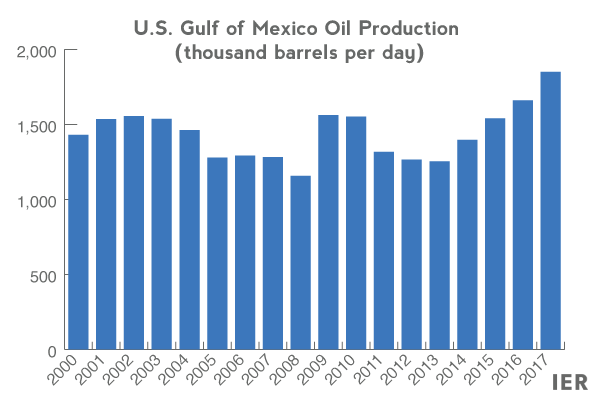 Exxon Mobil started pumping 13,000 barrels a day at the end of April from a well called Julia–200 miles south of New Orleans. Its production is being piped back to Chevron’s Jack/St. Malo platform. Exxon expects Julia’s production to eventually reach 34,000 barrels a day. Other oil companies, such as BP, Royal Dutch Shell, Anadarko Petroleum and Noble Energy are also pursuing tiebacks. Noble almost doubled its Gulf output in the first quarter and has another offshore well starting to pump later this summer. Anadarko has more than 30 tieback well prospects in satellite fields and will drill up to seven this year. [i]

Chevron recently executed a tieback to its Tahiti platform 190 miles south of New Orleans using a technique that allowed it to tap two oil reservoirs stacked on top on each other. The resulting well will produce 50 percent more oil and gas than originally thought. Even smaller companies have lowered costs. LLOG Exploration Co. pioneered a platform-building process that can bring new projects online in half the time it takes other companies.

Tieback wells are drilled in fields not large enough to justify the large expense of building new floating installations in the Gulf. Some tieback wells can be profitable when oil trades as low as $25 to $30 a barrel, and others are profitable when crude oil prices are between $30 and $40 a barrel. It can take a decade and billions of dollars to construct the massive offshore oil platforms that are located in thousands of feet of water.

Companies are also getting better at accessing deep-water finds. Shell saved $1 billion drilling its Stones project in ultra-deep water 200 miles southwest of New Orleans by using a slim-well design its engineers borrowed from onshore shale operations. It will begin producing oil and natural gas from the well later this year.

The United States produced 9.1 million barrels of oil a day for the first 4 months of this year–468,000 barrels less than the same time last year, due to the decrease in overall drilling, primarily in shale areas, resulting from sustained low oil prices. However, U.S. onshore rig counts are finally on the uptick, once oil prices remained over $45 a barrel, despite their being down 79 percent from their high in October 2014. The oil industry’s resilience has benefited from more efficient procedures from a combination of new technology and lower prices for drilling services. Rigs today can pump an average of 27,000 barrels of crude oil per day, compared with just 6,000 barrels a day two years ago. The newer rigs along with increasing offshore production could slow or even stop the recent decline in U.S. oil production.[ii]

The low price environment has brought collaboration to oil companies worldwide. For example, last month companies operating in the North Sea started pooling spare parts and tools and sharing plans on how to drill wells. Shell and partners including EnQuest Plc, Marathon Oil Corp., Apache Corp., Centrica and Repsol SA’s Talisman set up a pool of spare parts, ranging from nuts and screws to valves and compressors from their excess equipment, cataloged it, and stored over 200,000 parts in warehouses in Aberdeen. If a company needs a part for a North Sea facility, it can log on to the system, go through the catalog, place an order and have the part delivered the next day instead of waiting weeks or months. Shell is also leading a group in which members are asked to share their drilling plans so others could give their opinion and experience on how to reduce costs, saving as much as 10 percent.[iii]

Incremental savings can add up to significant cost reductions for individual projects. Statoil ASA and its partners have cut the estimate for capital spending on the large Johan Sverdrup field in the Norwegian North Sea to 160 billion kroner to 190 billion kroner ($19.3 billion to $22.9 billion) from 170 billion kroner to 220 billion kroner previously. BP’s Mad Dog Phase 2 project in the U.S. Gulf of Mexico is now expected to cost less than $9 billion compared with an estimate of $10 billion last year and $20 billion four years ago. Rig-rental rates are likely to stay down because of an oversupply and low steel prices are reducing the cost of other equipment.

Oil Companies have responded to the price drop by reducing spending, potentially cutting as much as $1 trillion by 2020. The industry has reduced costs by 10 percent to 15 percent overall. Operating costs have fallen as much as 40 percent in the past two years.

Despite oil prices being down, offshore oil production in the United States is booming through new wells coming on line and tiebacks. According to EIA forecasts, U.S. offshore oil production will exceed its 2009 peak both this year and next. Onshore, rigs are slowing being added and efficiencies and new rig technology is allowing a lower breakeven price for oil production that could result in countering some of the reduced production this year. Globally, oil companies are sharing parts and drilling plans to reduce costs. These efficiencies will not only help in the near term but in the future as well.