Move over Al Gore. Arnold Schwarzenegger is the new public face of climate alarmism and government-driven energy transformation. But 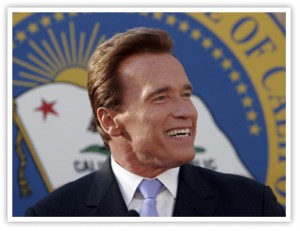 what the irony! When it comes to energy, Arnold is pushing bloat over muscle when he speaks of wind and solar (“green” energy) displacing oil, gas, and coal. Politically correct renewables are dilute and resource intensive compared to the muscular energies found in the ground. Seen another way, the flow of solar (including the wind) is BTU-impoverished versus the sun’s work over the many millions of year. It is not even a beach fight.

Arnold talks big. In his recent keynote speech at the ARPA-E EnergyInnovation Summit, Schwarzenegger called for ending to the debate over the science and politics of global warming and for the U.S. to change energy directions. “We want a new era of energy independence, a new era of green technology and green jobs, a new era of better health from a cleaner environment and a new era of American inventiveness,” he said.

But words will not alter the reality of energy density. Wind and solar are not only more expensive than conventional energies, they are far less reliable. (In the trade, they are intermittent rather than dispatchable.) William Stanley Jevons explained why back in the first treatise on energy economics, published in 1865. “The first great requisite of motive power is, that it shall be wholly at our command, to be exerted when, and where, and in what degree we desire,” he explained. “The wind, for instance, as a direct motive power, is wholly inapplicable to a system of machine labour, for during a calm season the whole business of the country would be thrown out of gear.”[1]

Sure enough: wind (and solar) cannot perform electrical services short of attaching storage capacity or having electricity generated from gas or coal fill in the gaps. Either correction adds costs and dilutes the “greenness” of renewables.

Energy-poor wind and solar require huge applications of other resources (land, labor, and capital) to compete against energy-rich oil, gas, and coal. It is here than the big environmental picture changes in favor of the efficient. In his book Hard Green, Peter Huber concluded:

The greenest fuels are the ones that contain the most energy per pound of material than must be mined, trucked, pumped, piped, and burnt. [In contrast], extracting comparable amounts of energy from the surface would entail truly monstrous environmental disruption….  The greenest possible strategy is to mine and to bury, to fly and to tunnel, to search high and low, where the life mostly isn’t, and so to leave the edge, the space in the middle, living and green.[2]

Arnold Schwarzenegger needs to get to the energy gym. Rather than be the intellectual girlie men at the beach, he needs to bulk up on his understanding of energy density through the writings of William Stanley Jevons, Vaclav Smil, and Robert Bryce. His message might change for the better.

Secretary Salazar Heads to the Hill to Beg for Bureaucratic Bucks