On Monday minority House leader Nancy Pelosi held a fake committee hearing on green jobs. We say “fake” because, according to 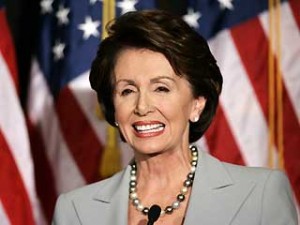 Greenwire (subscription required), the affair was simply a meeting of the Democratic Steering and Policy Committee, as opposed to a genuine Congressional hearing.

In comments about the shadow hearing, various policymakers repeated myths about the alleged economic benefits of federal investment in “clean energy.” We have dealt with these fallacies before (see a compilation of studies here), but since this promises to be a major political issue, it’s worth picking apart the errors involved.

Three Strikes and Pelosi Should Be Out

According to the Greenwire article:

House Minority Leader Nancy Pelosi (D-Calif.)…will announce a Monday hearing of the Democratic Steering and Policy Committee on the job-creation benefits of “protecting the taxpayer and securing our energy future,” according to a copy of the announcement obtained by Greenwire. The hearing is expected to home in on the clean-energy funding that could be freed up by rolling back subsidies for major oil companies, a proposal outlined in President Obama’s State of the Union address.

“By investing in innovation, clean energy, and new technology, we can strengthen our future, put Americans back to work, preserve our national security, and ensure our country’s competitiveness in the global economy for generations to come,” Pelosi said in a statement on the hearing.

The three specific benefits alleged by Pelosi would not materialize because of federal spending on green jobs. Let’s analyze each claim in turn.

Pelosi Mistake #1: “Federal spending on green jobs will put Americans back to work.”

This is the central fallacy. As we have repeatedly pointed out, the federal government cannot create net jobs in the long run. In a market economy, wages and prices adjust so that everybody who wants a job ultimately gets one. Yes, the federal government can “create jobs” in one sector by pumping money into it, but only at the expense of destroying jobs somewhere else in the economy.

This is a crucial point so let’s say it in different words. To keep the numbers easy, suppose the economy has 100 million people in the workforce. (The official number is more like 154 million.) If the government sits back and watches the market do its thing, then during normal times about 96 million of those people will have a job doing something, and the other 4 million will be in transition between jobs.

Now if the government decides to “create,” say, 10 million jobs in constructing solar panels and related tasks—and these “new jobs” would not have otherwise existed—then it’s obvious that there are going to be fewer workers available for everything else.

Even if the new solar panel industry (which relies on government funding for its life support) is humming with 10 million direct and indirect jobs, the national unemployment rate won’t magically drop to zero. At any given snapshot in time, there will still be millions of them who are in transition between jobs, because they are moving to a new city, or they decided they wanted to pursue their dream in some other industry, or they had a fight with their boss. The point is, the reasons for the “normal” unemployment of 4 percent will still exist even in the presence of massive subsidies for certain sectors. So the jobs “created” by the federal spending, will simply mean that of the 96 million people originally doing jobs as dictated by market forces, 10 million of them will be working in slots designated by the government instead.

But Isn’t “Creating Jobs” a Good Idea During a Bad Recession?

In the section above we showed how silly it is to think that the government can create jobs on net, during normal economic times. On the contrary, if the government causes workers to flow into specific sectors (like solar panel manufacturing and electric car battery design), those workers must be coming from somewhere else in the economy. Jobs aren’t created on net, they are simply redistributed away from market-determined areas and into politically-determined ones.

Now this argument admittedly seems to break down when the unemployment rate is much higher than normal. In the midst of a terrible recession, can’t government spending “create jobs” for workers who are coming from the ranks of the unemployed? Doesn’t this allow for net job creation, as opposed to a mere reshuffling of workers among sectors?

Actually, even in the midst of a bad recession, it’s not clear that the government can create jobs just by throwing money at the problem. In terms of the underlying economics, the problem is that the unemployment rate is high for a reason. It’s not the case that businesses in 2007 decided to start laying off workers for kicks. No, the bursting of the housing bubble and the impact on other asset values showed that the economy was in an unsustainable configuration, and workers needed to be diverted into more appropriate sectors. In short, there had been too many workers sucked into real estate (and finance) and they needed to go elsewhere.

This isn’t some abstract theory. The federal government tried spending hundreds of billions of dollars to “create jobs” and lower the unemployment rate: it was the celebrated Obama stimulus package when he first came into office. And try as they might to excuse its failure, the stimulus proponents can’t avoid the fact that unemployment went up far more than they had anticipated—the economy shed more jobs in fact than they warned would happen if the government did nothing.

Our basic point remains: The government doesn’t promote genuine economic growth when it spends money to “create jobs.” The resources (including labor) flowing into the politically-favored sectors have to come from somewhere else in the economy. To try to boost total employment through federal spending, is like trying to raise the level in the deep end of a pool by taking buckets of water from the shallow end.

By this Pelosi presumably has in mind the fact that a large portion of oil comes from politically unstable regions of the world. The argument is that by switching away from oil, America can’t be held hostage to foreign governments.

We have dealt with this claim at length here. Put succinctly: Even dictators need money. Whether an autocratic regime or a Western-style democracy, whatever government ends up in charge of a country with large oil deposits, will take policies to export them. It does a government little good to be sitting on black gold but not sell it.

It’s true that geopolitical instability leads to more volatility in oil prices, and that is definitely a disadvantage. But the market can take these problems into account. People in the oil industry understand the world situation, and manufacturers of vehicles understand that oil prices might occasionally spike during political unrest. Even so, absent government intervention, the market for the foreseeable future would rely on fossil-based energy sources because they are simply the most economical and convenient, all things considered.

On the contrary, federal “green” policies—particularly the EPA’s intentions to regulate carbon emissions—will reduce U.S. competitiveness. Particular sectors of course can benefit from lavish federal subsidies, but the economy as a whole only suffers when legislators and regulators start picking winners and losers.

If Nancy Pelosi and other policymakers really want to help the economy, promote U.S. security, and enhance business competitiveness, they would reduce the role of the federal government in the U.S. economy. In particular, they could remove political obstacles to the development of domestic energy sources that can thrive without handouts from the taxpayer.