As the report explains, energy-related tax subsidies “are a poor tool for reducing greenhouse gases and achieving climate-change objectives.” Some notable findings include:

One of the most lavish tax subsidies for alternative energy, the production tax credit (PTC) offers 2.3 cents per kWh for electricity generated from wind, biomass, and geothermal and 1.1 cents per kWh for several other types of energy, including qualified hydroelectric. In lieu of the PTC, alternative energy developers can claim a 30 percent investment tax credit (ITC). About 75 percent of PTC and ITC funds have gone to wind facilities and 16 percent to biomass facilities, according to the report. In 2010 alone, the PTC/ITC cost taxpayers $4.2 billion, constituting about 36 percent of all energy-related tax subsidies. As the following graph shows, despite the exorbitant cost, the PTC and ITC have a minimal effect on carbon dioxide emissions. 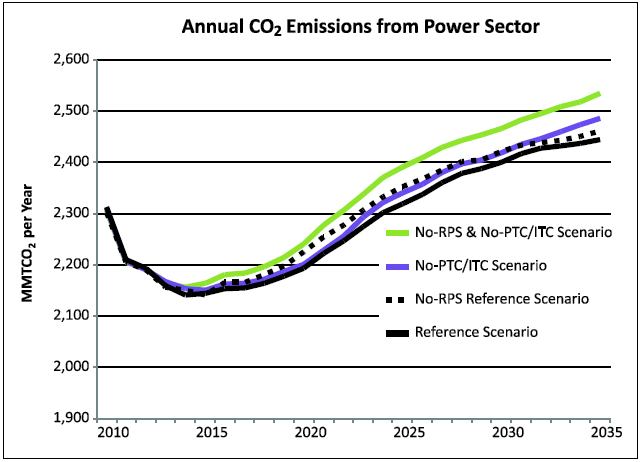 The PTC was not designed primarily to reduce carbon dioxide emissions, but to prop up the wind industry. Even so, as we have pointed out before, the wind PTC is not even effective at spurring wind development. Growth in wind installations is much more closely aligned with the expansion of state Renewable Portfolio Standards (RPS), which require utilities to generate a certain percentage of electricity from renewable sources, than with enactment of the wind PTC. Click here to learn more about subsidies for the wind industry

The largest tax subsidy examined in the report is the Volumetric Ethanol Excise Tax Credit (VEETC). Before expiring at the end of 2011, the VEETC awarded ethanol producers $0.45 per gallon of pure ethanol blended with gasoline. According to the report, VEETC was projected to cost $7.2 billion annually, on average, between 2014 and 2021. For the four months it was available in fiscal year 2012, the VEETC cost taxpayers $3.8 billion.

If the VEETC had not expired, it was projected to actually increase carbon dioxide emissions by about 5 MMT annually—equivalent to about 20 percent of the emissions of one very large coal-fired power plant in the United States. As the authors put it, the VEETC “lead to both revenue losses and higher GHG emissions.”

The report also examined the Renewable Fuel Standard (RFS), which requires refiners to blend increasing amounts of ethanol into gasoline. While the RFS is not a tax subsidy, the authors correctly note that it is a key regulatory measure used to subsidize ethanol production. In total, biofuel tax subsidies and the RFS were expected to increase carbon dioxide emissions by 7 MMT per year. The RFS is a flawed policy for other reasons as well, as discussed here.

Reducing GHG emissions is one goal for environmentalists who support energy-related tax subsidies. Another is simply to promote the development of alternative energy sources to displace hydrocarbons. But after frittering away billions of taxpayer dollars, hydrocarbons (coal, oil and natural gas) comprise more than 82 percent of primary energy consumption in America and are projected to still make up 78 percent of primary energy use in 2040. In contrast, renewable sources account for just 9.3 percent of U.S. energy consumption, most of which is hydroelectric power that has been installed for years; wind represents only 1.4 percent and solar just 0.22 percent of total consumption.

Nevertheless, green energy boosters are wont to offer misleading claims about alternative energy. The wind industry, for example, points out that wind was the largest source of new electrical generation in 2012. As IER explains here, although wind was the number one source of added generation capacity last year, natural gas added 11 times more actual electricity generation than wind. In fact, wind and solar comprised just 3.6 percent of electrical generation in 2012. In other words, tax subsidies for alternative energy are failing at both reducing GHG emissions and displacing hydrocarbons.

While the National Academies report examined only tax subsides, all forms of energy-related subsidies deserve scrutiny. IER’s Federal Energy Spending Tracker provides a comprehensive database of the most significant forms of energy-related subsidies: grants, loans and loan guarantees, and tax subsidies. According to the database, taxpayers have doled out more than $17.4 billion in grants and nearly $54 billion in tax subsidies to energy producers and products since fiscal year 2009. IER also found that the DOE’s loan guarantee programs alone have committed more than $26 billion since 2009 to create just 2,298 permanent jobs—that’s $11.45 million per job.

Instead of offering targeted subsidies to specific energy technologies, IER believes that a more effective way to promote economic growth and energy abundance is to reduce marginal tax rates across all energy sectors.

ICYMI: Americans are Against a Carbon Tax