The economics and environmental consequences of solar energy are finally hitting home to developers, with many more cancellations than construction of large solar facilities. Since 2009, there have been 365 federal applications for solar facilities, but of those, only 20 plants are on track to be built and only 3 large scale solar plants have gone on line—2 in California and one in Nevada. Last fall, when the first auction of public land for solar developers was held, not one bid was made. Why have expectations changed for large scale solar energy?  A number of reasons are cited. Solar companies are going out of business because solar power is not economic without large government subsidies and incentives; projects are being canceled because of lack of financing; saving threatened or endangered species, such as the desert tortoise, is costing solar developers dearly; and once built, solar developers are having difficulty in negotiating agreements to sell their power to utilities because solar power requires higher rates than what utilities pay for power from traditional energy sources.[i]

Solar development 5 to 10 years ago was influenced by state Renewable Portfolio Standards (RPS) that required electric utility companies to generate a specified amount of electricity from qualified renewable energy sources. In order to meet the mandate, electric utilities were compelled to pay more for the power, but many of them have already met or on track to meet their requirement without using high cost solar power. In California, for example, the state RPS mandate is as high as 33 percent renewable energy by 2020.

The federal government provides an investment tax credit that is currently 30 percent of the investment cost to solar developers, but that incentive drops to 10 percent at the end of 2016. The 10 percent investment tax credit to solar energy is a permanent subsidy. But when solar power costs 2 to 4 times more than new natural gas generation, a 10 percent subsidy is not a sufficient incentive for solar developers and private equity firms.  They are, literally, running out of other people’s money.

Two federal government programs that have expired helped to provide support for the initial large scale solar projects. The U.S. Department of Energy provided guaranteed construction loans to certain solar facilities with the U.S. Treasury Department lending taxpayers’ money at an interest rate half of what the private market would have provided. And, the Treasury Department had also provided the 1603 program that allowed renewable energy projects to receive 30 percent of their cost as a cash grant upfront in lieu of taking tax breaks gradually over several years in the form of the investment tax credit.  The federal loan guarantee program expired on September 30, 2011. The Treasury grant program expired at the end of December 2011.

Solar energy also qualifies for depreciation tax breaks for renewable energy plants that can save companies millions of dollars.

The Obama administration has made almost 20 million acres of federal land in the western United States available to renewable developers.  But despite this federal government endeavor, the first solar auction of federal land last October saw no takers. That auction was for 3,700 acres in Colorado’s San Luis Valley. Despite the lack of interest, Interior Secretary Sally Jewell pledged to continue working toward an Obama Administration goal of 20,000 megawatts of renewable energy production on public lands by 2020. The three current solar projects combined produce only 870 megawatts, just 4 percent of the goal.[ii] Some power from the three new operating plants has supplied electricity to the grid, but for the first 9 months of 2013, solar power’s contribution to the total national power supply was just 0.2 percent.

Migratory birds are found dead at solar sites because of the singeing of their wings when flying into the panels’ reflected beams of sunlight. Some of the birds are endangered and/or protected by the federal government under the Migratory Bird Treaty Act. For instance, last year 34 birds were found dead or injured at the Ivanpah solar plant facility in easEnergy!101t San Bernardino County, California where half had singed feathers. Another 19 birds were found dead at California’s Desert Sunlight plant. The California desert lies in one of the four major north-to-south trajectories for migratory birds: the Pacific Flyway.[iii]

Birds die typically in one of two ways at solar farms. First, the glimmering sheer of solar panels trick birds, particularly water fowl, into thinking the panels are part of a body of water, making the bird dive towards the panels. Second, the potent radiation bouncing off solar mirrors can burn a bird’s fragile wings, causing the bird to fall to its death. 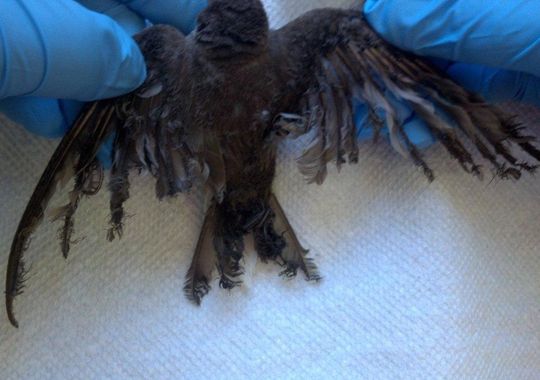 Desert tortoises are plaguing BrightSource Energy’s solar farm in the Ivanpah Valley, where the tortoise brought construction to a standstill for three months when excavation work found far more tortoises than biologists had expected. As of March 2012, BrightSource has spent $56 million to protect and relocate the tortoises.

BrightSource was warned that the site was heavily populated with tortoises, but the company wanted the site because it is ideally situated for generating solar power. The company negotiated with state and federal agencies for protocols for collecting and relocating the tortoises. BrightEnergy gave up around 10 percent of its expected power output in a redesign that reduced the project footprint by 12 percent and the number of 460-foot-tall towers from seven to three. The company also installed 50 miles of intricate fencing, at a cost of up to $50,000 per mile, to prevent relocated tortoises from burrowing back to the site. The company also agreed to monitor the tortoises for five years after they were moved.

Because the first survey of tortoises at the site located only 16 tortoises, the Fish and Wildlife Service issued BrightSource a permit to move a maximum of 38 adult tortoises, and allowed a total of three accidental deaths per year during the three years of construction. By February 2011, it was determined that the site contained far more tortoises than allowed under the permit and state and federal agencies ordered construction suspended until a new biological assessment could be completed. As of March 2012, 166 adult and juvenile tortoises have been collected and released on the other side of the fence from the solar facility.[iv]

BrightSource Energy’s  Ivanpah project is near completion, but another of its projects, Palen, may not survive. BrightSource proposed a 500 megawatt solar thermal power plant that was rejected by the California Energy Commission due to the potential for bird deaths from intense radiation from the thousands of mirrors, or heliostats. Unlike the photovoltaic solar panels that are common on the roofs of homes and commercial buildings, solar thermal technology concentrates the sun’s rays to boil water and generate steam. Solar thermal is land-intensive, requires access to transmission lines and faces environmental reviews and permitting hurdles before projects can be built in the desert. Two other BrightSource projects (the  Rio Mesa solar plant in Riverside and Hidden Hills in Inyo County) were mothballed due to permitting issues.[v]

Utility-scale solar projects are having a tough time getting approvals and financial backing. With state RPSs being met without these high cost facilities and federal subsidies declining, the incentive for solar power’s continued development has died. Added to the cost and subsidy issues of solar power are problems with birds and other wildlife that are being killed or otherwise threatened by these large solar power ventures.  All energy production involves trade-offs, and utility solar is proving to be no different.