There are 17 rare earth elements that are used in the production of high tech devices such as smart phones and computers, defense equipment such as radar systems and guided missiles, and energy technologies such as electric cars and wind turbines. The elements are found in tiny concentrations and are mixed together, making them difficult to isolate. China has the most global reserves of rare earth elements (42 percent)[i] and produces around 89 percent of global output, which it uses to fuel its high-tech industries, exporting the remainder. Global consumption of rare earth elements in 2016 is expected to be about 155,000 tons—almost 3.5 times greater than the 45,000 tons used 25 years ago. [ii]

According to the Energy Information Administration, reserves are “estimated quantities of energy sources that analysis of geologic and engineering data demonstrates with reasonable certainty are recoverable under existing economic and operating conditions. The location, quantity, and grade of the energy source are usually considered to be well established in such reserves”. Thus, reserves are not the entire resource base since more sources are bound to be found with additional exploration. 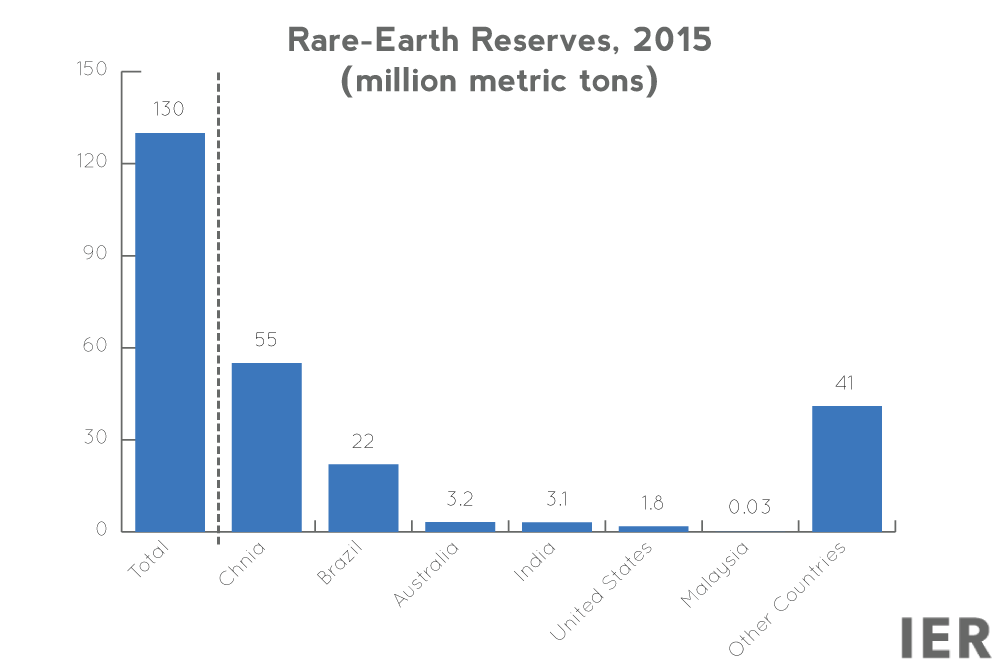 China is the global leader in the production of rare-earth elements, producing 105,000 tons in 2015, of which it exports about 30 percent. Because of their value and its near monopoly, in 2010, China cut its exports by 40 percent and cut off supplies to Japan over a territorial dispute, causing prices to soar. These actions were challenged by the United States, the European Union, and Japan, resulting in a ruling against the country’s export quotas by the World Trade Organization (WTO). The WTO ruled that the quotas represented an unfair export restriction that allowed China to control global rare earth prices.[iii] Because China does not impose the regulations on mining rare earths that other countries do, “toxic wastes from rare-earth facilities have poisoned water, ruined farmlands, and made people sick”.[iv]

The United States produced 4,100 tons of rare earth elements in 2015—about 25 percent less than in 2014. Molycorp’s Mountain Pass mine in California was the only producing rare earth mine in the United States and its production was reduced when the company filed for bankruptcy protection last summer and shuttered its Mountain Pass operations later in the year. When Molycorp filed for chapter 11 protection, it had over $1.7 billion in debt, much of it occurring when rare earth prices were high due to Chinese trade restrictions.[1] Before bankruptcy, Molycorp invested over $1 billion into the Mountain Pass mine.[v]

Russia produced 2,500 tons of rare earth elements in 2015—the same amount as in 2014–after having invested $1 billion in its production in 2013. The country’s production goal is to meet its own demand in 2017. Russian companies are working on new technologies to recover rare earths from uranium ore.

Thailand increased its production by almost 40 percent in 2015, producing 1,100 tons. It is not clear how much reserves the country contains. 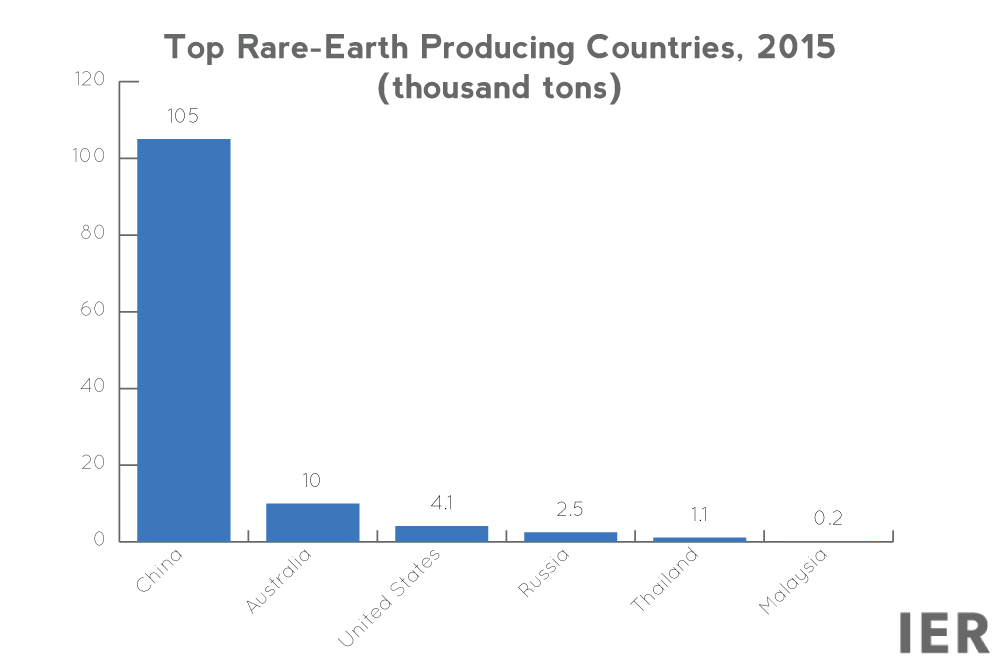 China has almost a virtual monopoly on rare earth elements that are needed for high tech (smart phones and laptops), defense equipment, and energy technologies. It not only produces the majority of rare earth elements, but it has the most rare earth reserves. The United States had one operating mine in California up until last year when Molycorp filed for bankruptcy protection and idled the mine. Australia is the only other country with major production of rare earths at a tenth of China’s production last year. Russia hopes to produce enough rare earth elements to satisfy its own demand in 2017.

[i] Statista, Rare earth reserves worldwide as of 2015, by country, http://www.statista.com/statistics/277268/rare-earth-reserves-by-country/

Do You Suffer From Range Anxiety?