WASHINGTON – A new study from the Institute for Energy Research finds that electricity from new wind and solar power is 2.5 to 5 times more expensive than electricity from existing coal and nuclear power.

The following chart shows the stark contrast between the cost of electricity from existing and new sources: 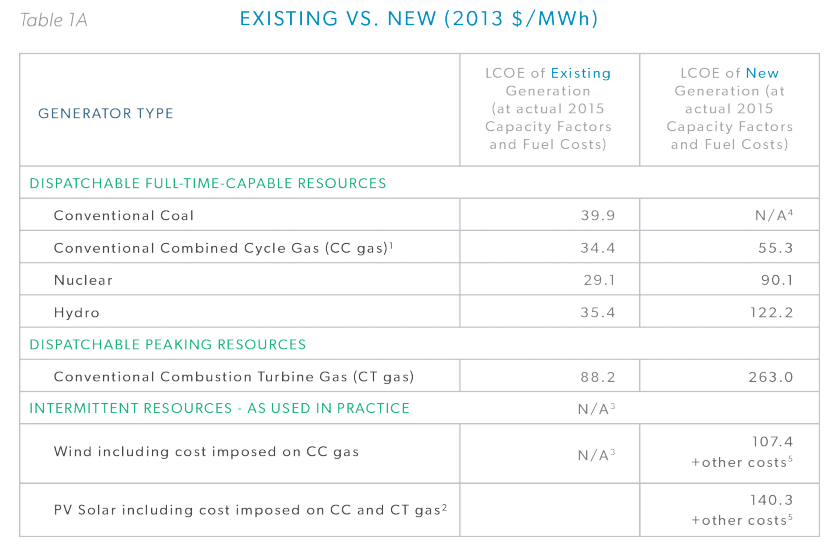 As the chart indicates:

“Much of our existing coal and nuclear fleet could continue to provide affordable, reliable electricity for decades to come if not for policies like the Obama administration’s carbon regulations or the deal struck in California to shut down Diablo Canyon,” said IER President Thomas Pyle.

“Unnecessarily shutting down our existing generation in favor of expensive and intermittent wind and solar power means Americans will be left with higher electricity bills and less money in their pockets. This will have the harshest impact on poor and middle class families who spend more of their hard-earned money on energy costs. This study adds a much-needed reality check to the debate over our nation’s electricity policy.”

This study was conducted by Tom Stacy, a former member of the ASME Energy Policy Committee, and George Taylor, PhD, the director of Palmetto Energy Research. The source of the calculations used in this study is a compilation of data reported by the generators themselves to FERC and EIA.

Rare Earth Elements: What Are They? Who Has Them?