New Englanders have a problem. They are using more and more natural gas for electricity generation and for home heating. In fact, they are the only region of the country where natural gas is increasing as a heating fuel. They can get inexpensive U.S. natural gas by building pipelines or they can buy imported expensive liquefied natural gas (LNG) from the Caribbean to fuel their generators and homes. Unfortunately, anti-pipeline activists are winning the fight. Kinder Morgan Inc. had to scrap its proposed $3.3 billion Northeast Energy Direct project in April due to a lack of customers. The Constitution Pipeline that would bring Marcellus gas from Pennsylvania is being held up because New York denied it a water permit, citing concern about contamination of the city’s supply. As a result, three or four times a month, giant ships are escorted through Boston Harbor, delivering LNG from Trinidad to a terminal on the Mystic River. That terminal supplied 11 percent of New England’s gas in January—the most since 2012.[i] 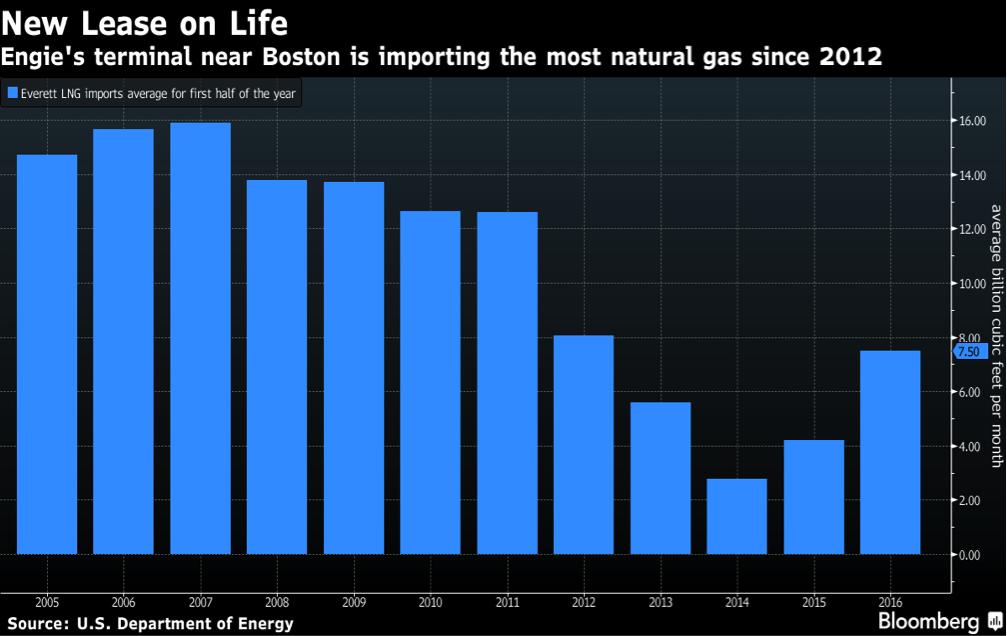 Natural gas-fired plants are currently providing over half of the Northeast’s electricity, up from 15 percent in 2000. The lack of diversity in generating supply has caused prices to skyrocket when gas supplies are low. When the polar vortex hit the Northeast in 2014, prices skyrocketed in the Northeast. That January, spot prices for gas in New England reached a record of nearly $80 per million British thermal unit (Btu)–15 times the price of Marcellus gas at that time. Even during a normal winter, New Englanders pay more for natural gas than elsewhere. For example, natural gas for delivery next January via Spectra Energy Corp’s New England network now costs around $8.46 per million Btu, compared with $3.16 for Pennsylvanian shale gas. The higher prices are due to a lack of infrastructure to get the needed gas the 300 miles from the Marcellus to New England.

Protests are still hampering an expansion of an existing natural gas pipeline, which is still months away from completion by Spectra. Another Spectra project, Access Northeast, if approved, would bring 925 million cubic feet of gas a day from Pennsylvania, which is enough to generate the electricity from five nuclear reactors, saving $2.5 billion a year on electricity and gas bills for New Englanders.

Environmentalists are against building pipelines because they want the fossil fuels to remain in the ground. However, over 80 percent of our energy comes from fossil fuels—oil, coal, and natural gas. So, leaving them in ground is not an option. Environmental groups want more efficient energy use (e.g. light bulbs and appliances that use less power) to handle surges in demand. But, that is unrealistic when shortages occur during cold whether when New Englanders need to heat their homes. Because home heating gets priority, electric utilities must pay the huge surcharges that they then pass onto consumers. Despite incentives offered to generators to stockpile LNG during the past two winters, another Polar Vortex or a long cold streak could see prices skyrocket again.

The Maine Public Utility Commission (PUC) recently determined that natural gas pipeline expansion was in the best interest of its consumers. However, Maine cannot act alone and other New England states must also comply to get a pipeline supplying natural gas to Maine consumers. Amazingly, this decision goes against the recommendation of the PUC staff, who considered the project too risky. But, the commissioners found that “it was reasonably likely that the benefits to consumers would outweigh the costs of building additional pipeline infrastructure.” The commissioners realized that there is not enough gas pipeline capacity to meet the needs of the region as it becomes more dependent on natural gas. Without additional capacity, the region is likely to see price spikes in the future as it did two years ago.[ii]

Vermont Yankee was shuttered in 2014 by Entergy Corp. because as a merchant plant, it could not compete against low cost natural gas. Entergy also announced it will close its Pilgrim nuclear reactor in Massachusetts in June 2019. These nuclear closures will hurt the region’s climate target of reducing its carbon dioxide emissions 25 percent below 1990 levels by 2020.

Furthermore, Massachusetts has a proposal to increase its use of renewable energy, requiring utilities to buy renewable power to meet almost half the state’s electricity needs. That legislation, if passed, would further affect the remaining nuclear reactors in New England (e.g. Seabrook in New Hampshire), who are having a tough time competing with natural gas. But also having to compete with mandated renewables would probably put those reactors out of business and further increase the region’s dependence on natural gas, which is used to back-up the intermittent renewable (wind and solar) plants.

To help struggling nuclear plants, New York said it could subsidize them to the tune of $965 million over two years.[iii] Recently, Entergy discussed selling its James A. FitzPatrick nuclear plant in New York to Exelon Corp., but that sale is dependent on the final terms and timeline of the New York State Clean Energy Standard that mandates 50 percent of the state’s electricity to come from renewable energy sources by 2030.[iv]

The Northeast is using more and more gas for home heating and electricity. It is over 50 percent reliant on natural gas for electric generation, and that number may increase as nuclear reactors in the region are being shuttered since they cannot compete with low cost gas. Further, if the area pursues legislation requiring renewable energy to gain a 50 percent share, the region’s nuclear units will have an even more difficult time competing and more natural gas will be needed to back-up the wind and solar units.

How the natural gas will get to the region is a dilemma as environmentalists oppose pipeline construction, wanting to keep the natural gas in the ground. Currently, LNG is helping to solve the issue as large tankers are bringing LNG from the Caribbean into Boston Harbor. Maine, however, has recently approved pipeline expansion noting that it is in the best interest of its consumers. But, other states need to follow to ensure that sufficient natural gas is available and to avoid price shocks, for both electricity and home heating.