Senator Jeff Merkley of Oregon recently announced his plan to introduce legislation that would require 100 percent of U.S. energy to come from renewable sources by 2050.[i] Other countries have tried to do just that and have faced extremely high prices, an unstable electric grid, and the relocation of their industries to other countries. Mr. Merkley needs to take lessons from them. Below are examples from Germany and South Australia.

With over 30 percent of its electricity generated from renewable energy, Germany has among the highest electricity prices in the world (3 times that of the United States) and an unstable electric grid, creating havoc for its industrial customers. To deal with these issues, Germany is planning to limit the amount of offshore wind that can be constructed and replace its feed-in-tariff subsidies for wind and solar power with electricity prices set competitively at auctions beginning January 1, 2017. 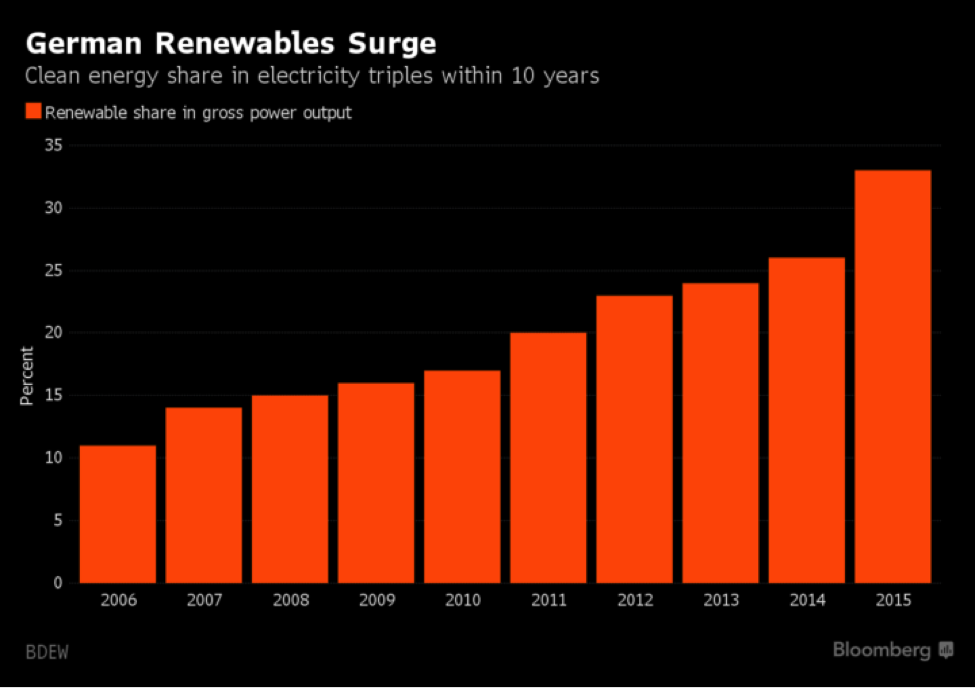 In South Australia, electricity prices have recently ranged from $100 per megawatt hour to as high as $14,000 per megawatt hour, regularly hitting above $10,000 per megawatt hour, due to its renewable energy program, causing the government to request that a natural gas operator bring its mothballed plant back online. The government has found that its electric system that is heavily reliant on wind power (40 percent comes from intermittent renewable sources) cannot cope without reliable power from traditional generation sources. The fallout is that Australia is finding that its energy-intensive businesses are relocating to Asian countries that provide stable regulation and costs, lower taxes, cheaper wages, and less red tape.[ii]

Last month, both houses of the German Parliament adopted EEG 2016—a bill that amends the German Renewable Energy Sources Act and discontinues feed-in tariffs for renewable electricity. Feed-in tariffs provide renewable energy producers with an above-market price for their electricity that is passed on to consumers as a surcharge. The fees increased to about 23 billion euros ($25.5 billion) last year, making German electricity the second-most expensive in Europe—second to Denmark, which also has the same issues with high electricity prices due to renewable energy generation.[iii]

The purpose of Germany’s Renewable Energy Sources Act was to reduce greenhouse gas emissions by producing electricity from renewable energy—primarily wind and solar power—rather than from natural gas and coal. The Act did not achieve its desired goal, however. When the tsunami hit Japan at the Fukushima nuclear power plant in 2011, Germany decided to also phase out its nuclear units. As a result, Germany has had to turn to coal to stabilize its electric grid, increasing its greenhouse gas emissions in recent years.

Because solar and wind can only generate electricity when the wind is blowing and the sun is shining, they cannot be controlled by the operator of the electric grid. As a result, brownouts and blackouts can result when these intermittent sources generate too much or too little power causing expensive equipment to fail at industrial facilities. To minimize the damage, Germany has paid consumers to take its excess power and asked wind and solar producers to switch off when their power is not needed. Last year, Germany paid wind farms $548 million to switch off in order to prevent damage to the country’s electric grid. Germany estimates that it will spend over $1.1 trillion supporting wind power.[iv]

EEG 2016 requires 55 to 60 percent of Germany’s electricity to be generated by renewables by 2035 and at least 80 percent by 2050. (The 2025 target is set at 45 percent.) The law will limit the construction of new offshore wind farms, capping the total amount of wind energy at 40 to 45 percent of national capacity. By 2019, Germany is expected to eliminate 6,000 megawatts of wind power capacity.

EEG 2016 also establishes competitive auctions covering up to 80 percent of electricity generated by new renewable energy facilities. However, smaller on-shore wind turbines and solar plants with an installed capacity of up to 750 kilowatts are exempt from the auctions.

South Australia has a 50 percent renewable energy generation target for 2025, getting around 40 percent of its electricity currently from intermittent renewables such as wind.[v] The recent price spikes that caused electricity prices to escalate over 100-fold were mainly caused by cold weather and maintenance on one of the two interconnectors to Victoria. The cold snap also caused natural gas prices to escalate, limiting the amount of gas-fired generation that can be meaningfully brought back into service.

As wind has provided an increasing amount of South Australia’s generation, the state closed its Northern and Playford coal-fired power plants, which helped to raise electricity prices to their highest average levels since the drought that occurred in 2007. That was followed by a planned outage of the Heywood Interconnector to Victoria. The cold weather on top pf these issues forced the government to request ENGIE to bring online its mothballed Pelican Point gas power plant, providing 239 megawatts of additional power. South Australia’s energy-intensive businesses cannot abide by prices escalating to such a degree and will be forced to relocate to countries where prices are stable and low and the regulatory environment is conducive to production.

Fifteen or more years ago, European countries instituted programs to move away from traditional sources of electric generation in favor of renewable energy. They have found prices to soar, reliability reduced on their national grids, and shortages of power when cold snaps or unexpected problems result causing price spikes. These same issues have arisen in South Australia and may arise in the United States if we follow suit. The Federal Energy Regulatory Commission is looking into the issue. It believes there is a “significant risk” of electricity in the United States becoming unreliable because intermittent energy does not provide the same power and reliability as traditional sources of electricity that are being shuttered due to President Obama’s programs. Senator Merkley should first examine case studies around the world before inflicting harm on the United States with his renewable policy unless of course Senator Merkley’s goal is to cause great harm to the United States.

Bloomberg Ed. Board Ignores Facts, Economics in Attack on Coal