“While we are disappointed by this particular outcome, we continue to believe the clean energy jobs race is one that America can, must and will win,” the White house said in a statement.[i]

Solyndra, a California based solar panel manufacturer, filed for bankruptcy on August 31, following in the footsteps of Evergreen Solar, based in Massachusetts, and SpectraWatt, based in New York[ii]. According to GTM Research, a renewable energy market analysis firm in Boston, these bankruptcies and the closing of BP Solar’s plant in Frederick, Maryland last year removes about one-fifth of the solar panel manufacturing capacity in the United States.[iii]  Solyndra will be laying off 1,100 workers[iv], the largest to date in a solar firm bankruptcy. Solyndra’s size was aided by loan guarantees from the U.S. Department of Energy totaling $535 million of U.S. taxpayers’ money. The cause of Solyndra’s demise, like that of other solar companies, is due to Chinese solar panels, subsidized by the government, undercutting the global solar market.[v]

The U.S. Department of Energy indicated that the price of a solar array had declined 42 percent since December 2010.[vi] According to Shayle Kann, a managing director of solar power studies at GTM Research, pricing of solar equipment is determined by the Chinese industry, “and everyone else prices at a premium or discount to them.”

The graph below from the U.S. Department of Energy website indicates that the United States must regain the lead in solar manufacturing from the Chinese.  In 1995, the United States had 43 percent of the market but our share has dwindled to 7 percent in 2010–just a pittance compared to that of China and Taiwan. China now has almost three-fifths of the world’s solar production capacity. To compete against China’s low cost labor and beneficial policies is truly difficult and is making U.S. companies file for bankruptcy. Besides inexpensive labor, China provides free or subsidized land from local governments, extensive tax breaks, low-cost loans from state-owned banks, and other state assistance.[vii] 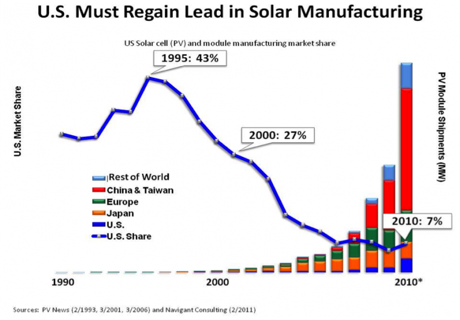 Instead of subsidizing the purchase and use of solar power as the United States and European countries have done, China has focused on building the competitiveness of the country’s solar panel manufacturers, exporting 95 percent of the solar panels it produces.  In the last two weeks, China’s three biggest solar power companies — Suntech Power, Yingli Green Energy and Trina Solar — announced second-quarter sales increases of 33 to 63 percent from a year earlier.

In Solyndra’s case, it borrowed money directly from the U.S. government through the Federal Financing Bank, part of the Treasury Department, rather than a commercial bank, which is the way the U.S. government typically guarantees loans. To date, Solyndra has received $527 million of the $535 million awarded by the Energy Department, which provided the outlays in multiple stages, contingent on reaching various milestones.[viii]

The Government Accountability Office (GAO) auditors investigating the Department of Energy loan guarantee awards found that the agency had given favorable treatment to some applicants, bypassing required steps for funding awards.  One of those applicants was Solyndra.[ix] Interestingly enough, one of the biggest investors in Solyndra is George Kaiser, a Tulsa billionaire, who was also a key Obama fundraiser.  The chairman of the Energy and Commerce Committee’s subcommittee on oversight and investigations, Representative Cliff Stearns, said he is “concerned that there was a hurry to get this money out of the door and that companies and individuals that supported the president were among the beneficiaries.’’[x]

Solyndra is just another solar firm that failed due to competition from China, who has low cost labor and a policy environment to compete in global markets where they can undercut their competition. China’s entrance into solar panel manufacturing makes total sense. What doesn’t make sense is the allocation of loan guarantees by the U.S. Department of Energy that bypassed steps in the award process and put so much taxpayer’s money at risk. And, it is interesting to note the relationship between Solyndra’s investor, George Kaiser, and the Obama Administration.  This is just more evidence that “trendy, politically directed investments don’t make for efficient allocation of capital.” There is an opportunity cost in that the money provided to Solyndra was not available to be directed where there could be a better chance of success.[xi] Further, even GAO auditors fear that further defaults may occur because not all the loan-guarantee applications were fully vetted.[xii]