As world financial markets are whipsawed with each new piece of news, pundits from all stripes are declaring the economic “recovery” has been bogus all along. Yet rather than recognizing that the enormous Keynesian “stimulus” of the last three years has been a failure, interventionist policymakers are calling for more of the same.

Earlier this month, Senator Harry Reid called for the government to focus once again on job creation, specifically in the “clean energy” sector. Yet Green Keynesianism is just as bankrupt as its generic cousin. Ever since his candidacy, Barack Obama has been heralding green jobs as the twin solution to our economic crisis and concerns over climate change. Three years later, we are still waiting for this empty promise.

The Failure of Keynesian Pump Priming

Naturally, today’s Keynesian apologists defend their track record with the familiar excuse: “Our policies averted disaster but weren’t big enough to bring a full recovery. The Tea Party snatched defeat from the jaws of victory.” Etc.

In light of this rhetoric, the following two charts are instructive. The first shows the federal government’s net saving, meaning that deficits show up negative numbers: 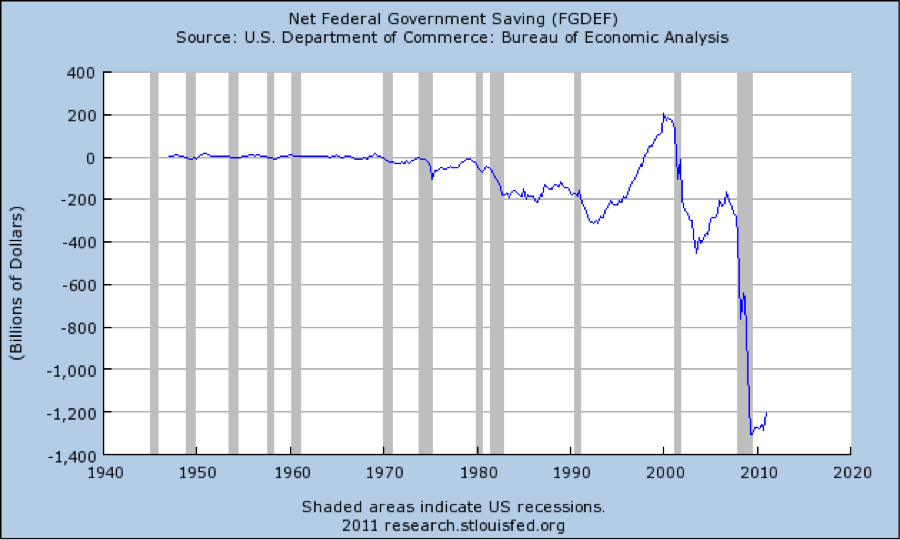 Americans may not remember, but it was only a few years ago when a deficit of a few hundred billion sounded outrageous. Yet nowadays, the CBO projects that under realistic assumptions on Congress’ behavior—such as extended the exemption from the “Alternative Minimum Tax” to middle-class families—the government will run perpetual trillion-dollar-plus deficits starting in 2016. (From 2013 – 2015, CBO projects that the deficits won’t be quite that high, but they’ll still be above $900 billion.)

When it comes to monetary intervention, the recent efforts have been truly unprecedented: 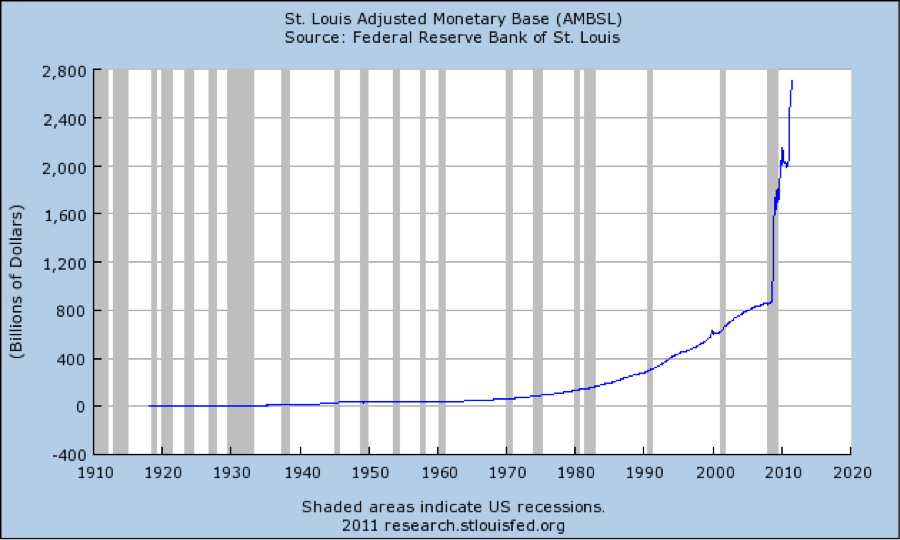 Any observer with common sense should realize that our economic problems of the last few years are not due to a lack of Keynesian effort.

Harry Reid Wants to Double Down

Clean energy will be part of a broader jobs agenda that Senate Democrats will pursue when lawmakers return from their August recess, Majority Leader Harry Reid (D-Nev.) said Tuesday.

“Clean energy jobs, they are changing the face of this nation. We need to do that,” Reid said Tuesday in a floor speech after the Senate passed the long-sought debt compromise, adding that Congress “must now return to its most important job, creating jobs.”

“It’s now time for Congress to get back to our regularly scheduled programming, and that means jobs,” Sen. Charles Schumer (D-N.Y.) told reporters.

“It’s time for jobs to be moved back to the front burner,” he said. “With this debt-reduction package completed, the decks are now cleared for a single-minded focus on jobs in September.”

Reid said staff will work during recess to flesh out the specifics of the jobs package, mentioning energy as one of several issues on Democrats’ agenda.

“So there are many things we can do. And we also, of course, are concerned about the new energy jobs that are out there, and we have a lot of other things that we — we don’t have them finalized yet, but we will,” Reid said.

The implication from the above remarks is that the federal government is capable of creating jobs—such as those in the “clean energy” sector—but gosh they’ve just been so busy lately, they haven’t had time to do so.

This is nonsense. The original Obama stimulus package contained over $80 billion in subsidies for “green” causes, and yet reality turned out (infamously) to be at odds with the projections given by the Obama economic team and Keynesian macro forecasters. Every new round of mandates and deficit spending further shackles the private sector and its ability to provide affordable energy to Americans.

The election of Barack Obama was supposed to be historic for many reasons. One of them was his commitment to “green jobs” and its promise to pull the economy out of its slump. Even though its failure is now three years old and counting, policymakers continue to trot out the same rhetoric.

Rather than picking winners and losers, the federal government need only untie the hands of entrepreneurs to develop domestic energy resources. This would accomplish the goals of higher tax revenue (and thus lower budget deficits), increased output (and thus lower unemployment), and lower energy prices for consumers. Will such common sense be delivered any time soon? We can dream.