The US Postal Service’s fiscal woes are deepening, as it just missed a $5.6 billion payment for future retirement beneficiaries. There are many factors behind the USPS’s troubles—including the overarching fact that more people are communicating electronically—but inefficient “green policies” and the Obama Administration’s reluctance to allow domestic energy development are surely adding to the pain.

The Check’s Not in the Mail

The NYT story linked above outlines the USPS’s money troubles:

The Postal Service sank deeper into debt…after the agency defaulted on a $5.6 billion payment due at the end of September, the second time it has missed a deadline this year to set aside money for its future retiree health benefits.

The agency said it expected net operating losses to be $15 billion for the fiscal year that ended Sept. 30. That loss includes the two missed payments totaling $11.1 billion for the agency’s future retiree funds. This month, the Postal Service also faces a $1.5 billion workers’ compensation insurance payment to the Labor Department. It said on Monday that it would most likely make that payment, but that it would be left with a cash shortage of about $100 million.

The agency is seeking to end Saturday delivery, enter new lines of business like shipping beer and wine, close nearly half of its mail processing centers and reduce hours at local post offices. It is also seeking to stretch out the payments for its future retiree benefits and to receive a refund of $11 billion that it has overpaid into one of its pension funds. [Bold added.]

As is not surprising, the USPS—protected by a government monopoly privilege on first-class mail delivery—is responding to its financial troubles by making its product less attractive to customers, and by raising prices. If mail delivery were provided in a fully competitive market, entrepreneurs would likely discover ways of dealing with the e-revolution that enhance customer satisfaction and keep prices low.

But we shouldn’t be too harsh on the USPS, because the Obama Administration’s energy policies have made gasoline artificially expensive. Moreover, the USPS is necessarily a political animal, and so has adopted “green policies” that hurt the bottom line.

Higher Gas Prices Nothing to Write Home About

Since Obama took office, gasoline prices have risen from about $1.84 per gallon to $3.78. In 2010, the USPS used 399 million gallons of fuel. Thus the increased gas prices alone work out to a back-of-the-envelope extra $774 million annually in expenses.

It’s true that there are many factors affecting the world price of crude oil, including the actions of central banks, and so the Obama Administration is not exclusively responsible for the rise in gas prices. but we have documented extensively on these pages how just the expectation of relaxed constraints on domestic oil production would immediately lower oil prices.

Beyond the Administration’s general reluctance to embrace domestic development of oil and gas, another factor is the USPS’s own championing of so-called green policies.

The following table from a GAO report summarizes the USPS’s commitment to “alternative” energies: 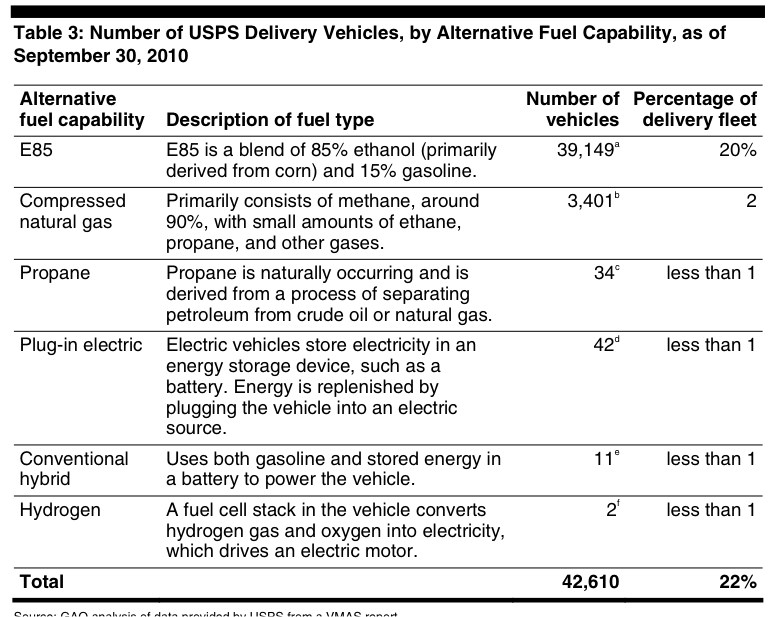 In addition to the promotion of “flex fuel vehicles,” the USPS is also spending money having a third-party verify its greenhouse gas emissions, testing electric delivery vehicles with a maximum speed of 12 mph, installing a 2.5-acre “green roof” in New York City, installing solar electric and solar thermal systems across the country, and installing “vegetative roofs” on its facilities.

The USPS is in an awkward position. Technically not a direct arm of the federal government receiving direct taxpayer funding of its operations, nonetheless it enjoys a monopoly privilege as well as other support (often in the form of government loans) from the government. Yet because of this support, the USPS is ultimately subject to Congress to approve its business plans, and therefore must make ostentatious shows of its commitment to “green energy” and other fashionable trends. In times of plenty, this would be wasteful, but during a financial crunch the cost of these foolish policies is even more painful.