We have already written a history and critique of the wind energy Production Tax Credit (PTC) which is set to expire at the end of the year. We also recently debunked two pro-PTC studies put out by the NRDC.  Yet we have just come across a different analysis [pdf], conducted by wind developer NextEra Energy, that makes a novel argument for the PTC: This particular study claims it would help the government’s finances to renew the tax credit for unsustainable wind energy. In this post we’ll outline the flaws with this unusual claim.

The NextEra study relies on the Jobs and Economic Development Index (JEDI) Model from the National Renewable Energy Laboratory (NREL), in order to calculate the impacts of a one-year extension of the PTC for wind energy. NextEra reports that this would lead to a “fiscal net benefit to the government of $768 million.” The following diagram, taken from the NextEra report, explains how they came up with this eyebrow-raising number: 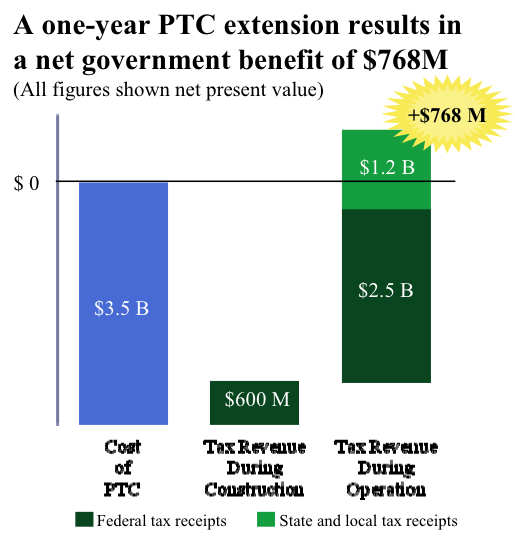 A few things jump out from the diagram above. First of all, extending the PTC one year will (they estimate) have a “cost”—meaning revenue that the federal government would otherwise have collected—of $3.5 billion. Then, to offset this figure, the NextEra analysts look over the future and take the “net present value” of a flow of extra revenues to governments at various levels, which they claim are due to the extra jobs created by the one-year extension.

We see that even on their own terms, the federal government loses money from extending the PTC—its initial $3.5 billion tax expenditure (to extend the PTC for an additional year and incur all of the commitments this implies) is only counterbalanced by $600 million + $2.5 billion = $3.1 billion in enhanced revenues to the federal government down the road. It’s only by throwing in alleged extra tax receipts to state and local governments (the lighter green shading) that the PTC gets over the hump.

The fundamental problem with the NextEra figures is that they assume jobs associated with a subsidized wind farm are net jobs to the entire economy. Yet this is wrong, because the PTC will generally just rearrange employment. As Dr. Robert Michaels explained in 2010 testimony to the Energy and Environment Subcommittee:

No matter what numerical data is input into NREL’s [JEDI] model, the only result it can possibly produce is that renewables result in job creation.   With job creation its only possible finding, the model is valueless for evaluating any claims about either job creation or job destruction.  NREL is well aware of this weakness, but continues using this model despite the availability of less-flawed alternatives.

To see this problem with the JEDI model more clearly, suppose we are initially in a normal economy, with full employment. In this case, everybody who wants to work can find a job after a quick search; at any given time, the only people who are unemployed are in transition because they just recently got laid off, or because they quit their old position to move to a new city, and so forth. Clearly, in this scenario of a normal economy with what economists call the “natural” rate of unemployment, extending the wind PTC couldn’t possibly “create jobs.” All it would do is take people who otherwise would have gone into other sectors, and instead redirect them into the wind sector, which would be relatively inefficient except for the biased tax advantage given to wind by the PTC.

In this case—where the PTC simply rearranged employment patterns, rather than adding to total jobs in the economy—the alleged extra tax receipts from extending the PTC would be zero. Federal, state, and local tax receipts from employment would be unaffected by the PTC. There would be more workers paying taxes in the wind sector, to be sure, but there would be exactly that many fewer workers paying taxes in non-wind sectors. So total tax payments would be a wash, compared to the still sizable cost to the federal government of extending the PTC.

“But We’re In a Recession Right Now!”

Of course, the proponent of extending the PTC would respond by saying that currently the US is in a severe recession, and it is possible for the economy to generate new jobs, because there is a large pool of unemployed workers. Yet even here, we need to pick the proper baseline, in order to assess the impact of extending the PTC.

For example, even if the government did nothing, eventually the economy would recover from the recession. New jobs would be created in various sectors, as the unemployment rate returned to normal levels. To make the proper case, then, the PTC proponents need to explain what their forecast of employment growth is with the PTC and without the PTC. The JEDI model they use implicitly assumes that new jobs in the wind sector come from heaven, without slowing job creation in other sectors as the economy emerges from the recession. This assumption obviously stacks the deck in favor of the “fiscal benefits” of the PTC, because it counts gross job creation in the wind sector as if it were net job creation in the entire economy.

Although the report from NextEra doesn’t specify the exact time frame used, they do say this: “Tax revenues flow from wind development projects for the life of the wind farm, well beyond the 10 years that the PTC is awarded.” Thus we see that the “net present value” of their calculations of tax receipts in the diagram above, are “well beyond” a 10-year timeframe. To count jobs in the wind sector, in, say, the year 2023 as net additions because of extending the PTC in 2013, is to assume that there would have been no other jobs available for these workers in the year 2023 had the government not given a tax advantage to wind energy. This is nonsense; of course workers in 2023 would be able to find a job on their own, without the government in 2013 giving a tax break to wind.

The one mechanism by which the PTC could conceivably cause net job creation (at least in the short term) is that it is, after all, a tax credit, and hence the PTC lowers the federal tax burden on business relative to the status quo. Especially during a severe slump, it is theoretically possible for a “Laffer Curve” effect to hold, in which tax reductions actually lead to more revenue in the long run because of enhanced incentives to business expansion.

However, even here the PTC is a poor policy choice. If one is going to spend $3.5 billion in statutory tax relief, there are far more “supply-side,” pro-growth approaches than for the government to pick a very specific sector. Instead, it would make more sense to (say) lower personal income tax rates across the board, or to lower the corporate income tax rate. This would allow market forces more discretion in allocating the faster job creation (during the recovery from recession) among the sectors that were truly more efficient, rather than focusing the new jobs on an artificial creature of the tax code.

We can make our point about gross vs. net job creation in a different way by quoting from the NextEra report itself:

The PTC was originally enacted as part of the Energy Policy Act of 1992. Since then the PTC has been set to expire seven different times. On three occasions the PTC has been allowed to expire (1999, 2001 and 2003). In the years following expiration, installations dropped between 73 and 93%, with resulting severe job losses.

What we should conclude is that the PTC has little to do with net job creation (or destruction) in the economy. As the boom in the late 1990s continued, workers were able to find jobs, even though the PTC temporarily expired in 1999, which we are told resulted in “severe job losses.” Those displaced workers were able to find jobs elsewhere, in the booming economy. A similar thing occurred in the recovery year of 2003, when the PTC also expired, and yet the labor market improved going into the next year.

Of course, the middle episode—when the PTC expired in 2001—seems to fit the NextEra narrative. In this case, workers lost jobs in the wind installation niche, and probably had difficulty finding jobs elsewhere. Yet the problem here wasn’t the lack of wind jobs per se, it was the fact that the dot-com bubble had popped and the economy was in a recession.

Generally speaking, tinkering with the tax code to give advantages to certain sectors—such as wind energy—can’t increase employment on net, but can only rearrange it. Clearly, destroying jobs in non-wind sectors in order to create them in wind, doesn’t boost tax receipts to various level of government. In a normal economy, the tax expenditure of the PTC is a net loss to the government.

Even in the midst of a recession, where one could argue that properly designed tax cuts might spur a faster recovery, the wind PTC is hardly suited for the task. There would be much more job-creation bang for the tax-expenditure buck by implementing a broad-based reduction in marginal rates, rather than targeting a specific sector with generous advantages.

Wind Turbine Manufacturers Closing With or Without PTC Extension