Hawaii’s electricity prices are the highest in the nation and the state is getting heavily into solar power. On Oahu, where most of the state’s population resides, over 12 percent of electric utility customers have rooftop solar systems, which is about 20 times larger than the solar penetration rate of any utility on the mainland. Many of these solar homes have zero electric bills, which is causing problems for the electric utility company that must provide power to the other residents and maintain the power lines that the solar power uses without charge.[i]

The estimated rooftop solar system cost is $25,000 and the average payback period on Oahu is five years because of the financial incentives mentioned above, the sunshine the state receives, and the high cost of electricity. Hawaii’s high rates are not only due to rooftop solar power, but also because the state must import its energy. Hawaii gets over 70 percent of its electricity from imported oil.

Hawaii’s electric utility is finding out what German electric utilities have already discovered—they are having trouble surviving financially when they must provide back-up power to intermittent renewables (wind and solar) that is not fully reimbursed and must maintain the electric grid that the intermittent renewables also use for free. In Arizona, the electric utilities are asking solar owners to pay for their use of the grid that the utility maintains. Hawaii’s electric utility is doing the same by wanting to reduce the value of the solar they purchase from new rooftop solar homes by half.

Before the recent oil price drop, residential electricity averaged around 36 cents per kilowatt hour in Hawaii—3 times more than on the mainland. As an island state, Hawaii must either generate electricity from its own natural resources or import the fuel to generate electricity. Unlike on the mainland, Hawaii does not have the option to import electricity from neighboring states. Because Hawaii’s electricity plants were built before it was economical to ship natural gas as LNG, the plants primarily use petroleum. The high oil prices of the past decade have cost Hawaii an estimated $5 billion more than anticipated.

One of the reasons that Hawaii’s governor recently announced the 100 percent renewable target for 2045 is to escape the volatility of fossil-fuel markets. And, although LNG was considered an option, the governor noted that local jurisdictions in Hawaii are putting up a fight against natural gas, making it difficult to permit.[ii]

About 15 percent of homes in Hawaii have rooftop photovoltaic panels, and the CEO of Hawaii’s electric utility company expects that number to triple. Further, about 15 percent of the electricity generated in Hawaii is bought by the U.S. military, which is mandated by the Obama Administration to use more renewable energy. Hawaiian military bases consider solar farms and biofuel plants as good back-up should the civilian grid falter.

But both Hawaii’s governor and the U.S. military may find that 100 percent renewable energy may not be feasible, because despite the magnitude of Hawaii’s sun, it does not always shine and reliable energy will be needed to meet demand 24/7.

Through decades of experience, European countries have found that renewable energy cannot exist without subsidies and that even a modest proportion of wind and solar-generated electricity prevents gas and coal-powered plants from recovering their fixed costs, which has led to the shuttering of a reliable gas-fired power plant in Germany.[iii] In order to back-up its renewable power plants, Germany uses coal, which is cheaper than gas-fired generation in Europe.

Europe imposed generous subsidies but found them too costly. Germany, Spain, and Britain have been slashing them to reduce the strain on government coffers and/or to control the tariff on consumer bills.

In Britain, for example, the government recently announced a reduction in subsidies paid for new rooftop solar installations and new wind farms. The feed-in tariff, which currently pays British families 12.47 pence per kilowatt-hour (19.29 cents U.S.) for electricity sold to the grid, will be reduced January 1 to 1.63 pence (2.52 cents U.S.) for new installations–an 87 percent reduction.[iv] The subsidy will decrease gradually until the end of the decade, when it is to be cancelled.[1] The reduction in subsidy was ordered by the British Department of Energy and Climate Change because green energy was found to increase energy bills and make business uncompetitive. In Britain, green taxes, add more than $200 a year to average fuel bills.[v] Those against the subsidies believe it provides wealthy families with subsidies paid for by the many consumers who struggle to pay their energy bills.

When the feed-in-tariff subsidy was first introduced in Britain, it was extremely generous to encourage households to install solar panels, which triggered an installation boom that far exceeded expectations. (See graph below.) Around 700,000 families installed rooftop solar systems on their homes to take advantage of the subsidies. The annual cost is now estimated to be in excess of £800 million a year ($1,235 million) – almost twice the level the government originally anticipated due to the early boom. 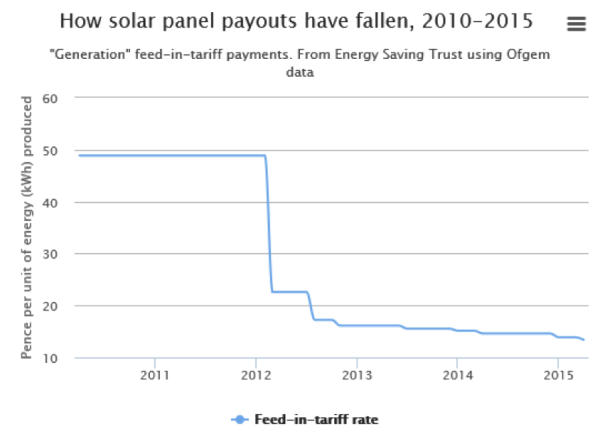 Hawaii’s electric utility has found that the mounting installation of rooftop solar systems has resulted in fewer consumers paying for the fixed costs the company incurs, driving up the bills of the non-solar consumers. This has prompted a request for a rate adjustment to half the rate paid for solar power sold to the grid. Hawaii has very generous subsidies for solar power that have encouraged home owners to install rooftop solar systems.

Generous subsidies have also been used in Europe to encourage renewable energy, causing electricity bills to skyrocket and electric utilities to have trouble covering their costs. Germany, Spain, and Britain have all reduced their subsidies to get costs under control.

Because Hawaii is an island state, it must either produce its own energy or import the fuel to generate it. It does not have the ability to import it from a neighboring state as do the states on the mainland. As a result, some renewable power is reasonable for the state. However, Hawaii’s governor wants the state to be 100 percent renewable by 2045. That is likely to be an unreasonable feat because renewables like solar and wind cannot produce power 24/7 and must be backed up by reliable forms of energy.

Because Hawaii’s electricity prices are 3 times the national average, it should serve as a cautionary tale for the rest of the nation. The states on the mainland need to learn from Europe’s experience and be conscious of the high costs of renewable subsidies and mandates that are needed to encourage their use.

[1] The feed-in tariff for large standalone units will be reduced from 4.28 pence to 1.03 pence per kilowatt hour. The Guardian, http://www.theguardian.com/environment/2015/aug/27/slashing-household-solar-subsides-kill-off-industry-government-feed-in-tariff