The Marcellus shale formation runs from West Virginia, through Pennsylvania and into New York. In West Virginia and Pennsylvania, natural gas production is booming, but not in New York. The reason for that is nothing to do with geology and everything to do with politics. Since 2008, New York has imposed a moratorium on the hydraulic fracturing necessary for natural gas production from the Marcellus.

The irony in New York State is that its residents may be short of natural gas and electricity this upcoming winter, but will have spent $1 billion of their money encouraging solar power producers to add 3,000 megawatts of solar panels on residences and businesses over the next 10 years.[i] New York could be producing natural gas and jobs, but with the moratorium the state will buy most of its natural gas from other states rather than producing it. Despite infrastructure problems in receiving natural gas from Pennsylvania this past winter that caused New York to turn to generating electricity from petroleum, the state remains firm in its desire to uphold the moratorium on hydraulic fracturing—despite evidence of any harm. Instead, it is putting its money on solar power, which is twice as expensive as new natural gas on a kilowatt hour basis, and can only be counted on to generate electricity when the sun is shining.

While production at the Marcellus shale in Pennsylvania and West Virginia is booming, the infrastructure was insufficient last winter to provide adequate supplies of natural gas from production areas to markets. When that happens, prices can skyrocket, as they clearly did for utilities in the Northeast. (See chart below.) According to the Christian Science Monitor, natural gas prices in New York briefly reached $90 per million Btu[ii], the energy equivalent of oil costing over $500 per barrel.  With actual costs for oil products much less, petroleum became much cheaper than natural gas and those utilities that could switch from natural gas to petroleum, did switch. 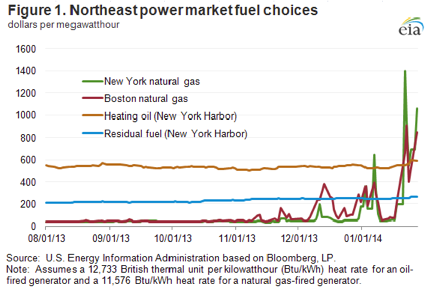 New York is heavily dependent on natural gas. Almost 55 percent of New York households use natural gas for home heating—more than the national average–and almost 40 percent of the state’s generation is produced from natural gas.

The Energy Information Administration reports that several proposed and recently completed pipelines/expansions (e.g. Transcontinental Gas Pipe Line Company’s Northeast Supply Link) will provide additional infrastructure to relieve some of the Marcellus supply backup and move gas north, into the New York and New England demand centers. But it may not be enough to ensure adequate supply for next winter. Another 1,300 gas wells have been drilled in the Marcellus Shale but not completed due to the backup of pipelines that are at full capacity.[iii] New York has both the Marcellus and the Utica shale formations within the state and could be producing its own natural gas if it were not for the moratorium on hydraulic fracturing.

In 2008, then Governor David A. Paterson imposed an administrative freeze on hydraulic fracturing, directing the state’s Department of Environmental Conservation to expand the scope of the Generic Environmental Impact Statement to include high-volume hydraulic fracturing. That moratorium has been reaffirmed by other moratoria. In August 2010, the New York Senate passed a bill that suspended natural gas drilling in the entire state until its environmental impacts were fully understood. Because the wording of the bill would have banned all gas drilling in the state, then Governor Paterson vetoed the bill, issuing Executive Order No. 41 in its stead barring the issuance of new drilling permits until the release of the final draft of the Supplemental Generic Environmental Impact Statement.

When Gov. Cuomo took office in 2011, he renewed the moratorium. He has kept it ever since even though a leaked draft from the New York Department of Health showed that natural gas drilling in New York is safe.[iv]

These policies deprive the state’s residents of the jobs, income and tax revenues that would have been generated by the development of the Marcellus and the Utica shale formations within the state. A study in 2011 found that the net benefits of shale gas drilling in New York would include[v]:

Governor Cuomo has continually delayed making a decision on whether or not to allow hydraulic fracturing, instead pushing solar energy as a perceived way to lower utility bills for households and businesses.

New York is encouraging solar power on residences and businesses in the state by subsidizing their installation by $1 billion for 3,000 megawatts of solar energy over the next decade.  That translates into $333,000 per megawatt of generating capacity. That may seem like a lot, but on a kilowatt-hour basis, it is even bigger. Over the course of a year, solar power generates just 25 percent of its theoretical maximum output. So, it takes approximately four times as many solar power units as it would more traditional generating units fueled by coal, natural gas, or nuclear to produce the same amount of electricity.

Between 2008 and 2012, natural gas production from shale gas wells using hydraulic fracturing rose from 4 percent to 40 percent. At the same time, natural gas prices declined by over 60 percent, which resulted in an energy savings of more than $110 billion to the U.S. economy. One author compared the savings of lower natural gas prices to the cost of the Low-Income Home Energy Assistance Program (LIHEAP). In 2012, LIHEAP provided $3.5 billion in cash assistance, while the comparative decrease in natural gas costs for low-income households (heating and electricity) in 2012 was more than $10 billion—about 3 times the low-income subsidy.[vi]

New York State is looking to solar energy as a way to meet its renewable portfolio mandate and to supply additional energy to the state. This is indicative of the policies that have made New York’s electricity rates the highest in the continental United States. But, within the state’s borders it has both the Marcellus and the Utica shale formations that could be supplying low cost natural gas to the states residents if it wasn’t for the state moratorium on hydraulic fracturing. The current shale gas drilling moratorium imposes a significant and needless burden on the New York State economy. The economic benefits of developing shale gas resources in New York State are enormous and could be growing, while the environmental costs of doing so are small and could be diminishing if the moratorium is lifted and if proper policies are put into place.

Politics vs. Science at IPCC