Last week, we explained why AWEA’s recent report on negative price is fatally flawed. AWEA failed to rebut the claim that the wind production tax credit (PTC) leads to predatory pricing in electricity markets. In fact, this subsidy is so generous that wind producers can actually make money while paying people to take their product.

Here is an example to show why AWEA’s claim is flawed. Let’s say that the market price for a bushel of corn is $5 a bushel. And let’s say in this simplified example that it costs corn farmers $4 to grow a bushel of corn. In this case, these unsubsidized corn farmers make $1 profit per bushel sold.

Seeing this success, certain corn farmers convince the government that their corn growing is special and deserves a “corn production tax credit” where they get $2.50 in tax breaks for each bushel of corn grown. At the market prices of $5 a bushel, the unsubsidized corn PTC farmers make $1.00 a bushel while the corn PTC farmers make a whopping $3.50 a bushel. 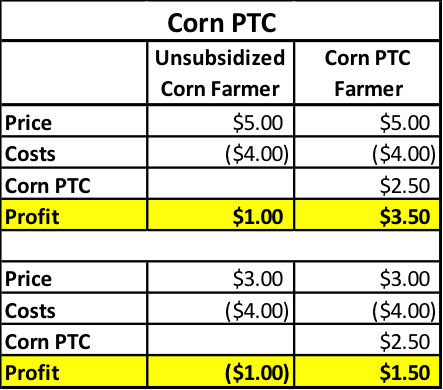 The “corn PTC” is similar to the wind PTC. The prices in wholesale electricity markets do not need to be negative for the predatory pricing that the PTC enables to cause reliable, dependable electricity to lose money. This is what AWEA fails to admit.

We explained this in an analysis last week and AWEA posted a new blog post to try to bolster their claims. But AWEA failed to provide any reasons to believe them other than a naked appeal to authority.  For example, AWEA quotes James Robo, the CEO of NextERA Energy who wrote “Blaming the wind industry for the challenges in the merchant nuclear business may be politically expedient, but it will not help any company or technology operate more successfully in a low natural gas price environment.”

Robo misses the point. It’s not the wind industry that’s necessarily the problem, it’s the PTC because it enables predatory pricing.

“Negative pricing is not driven primarily by wind. There are issues with how nuclear plants respond to the changes in the marketplace and the need for more flexibility in dispatch. And of course, low gas prices are one of the big factors changing everything in the electricity market…but the negative price issue has been very, very rare for us, and we do not see it as a significant challenge. ”

Again, as shown in the hypothetical example of the corn PTC above, prices do not need to be negative to be destructive.

“Wind energy does not have a negative impact on electricity markets and does not cause nuclear plants to shut down. Merchant nuclear plants are challenged primarily by low natural gas prices. Killing the PTC will not change this. Eliminating the PTC would serve only to kill job-creating investments in renewable energy projects across the country, [obstructing] clean, reliable, and affordable energy that is produced right here in America.”

This is a naked appeal to authority and neither AWEA nor DiDonato gives us any reason to believe it is true. In fact, DiDonato’s claim is even more suspect because it is self-serving as NextERA is “one of the world’s largest generators of wind power.”

Ironically, AWEA hypocritically chides Exelon for “for publicly advocating for the elimination of subsidies for wind and solar power and at the same time asking for public help to bolster the finances at several of its nukes in Illinois.” Unless AWEA wants to join with IER and renounce the PTC, state level renewable portfolio standards, all of the grants and special tax treatment wind developers have received from the federal and state government, and the rest of the wind industry’s subsidies, then AWEA has no standing to complain about companies asking for government assistance.

Lastly, AWEA quotes its own Michael Goggin as saying “Wind energy’s impact on markets is positive, by displacing more expensive forms of energy,” Goggin opined. “This impact is entirely market-driven, is widely seen as beneficial, and occurs for all low-fuel-cost sources of energy, including nuclear.”

If Goggin really believes the wind energy’s impact is “market-driven” then what is the point of the PTC other than a naked transfer of taxpayer dollars to wind developers?

The PTC creates harmful market distortions and AWEA’s recent blog post fails to provide any evidence that this is not true. The problem is not merely the negative pricing that rears its ugly head a small percentage of the time—it is the market distortions that accompany the PTC at all times. Sometimes these market distortions are so great that they result in negative pricing, but the problem exists even in the absence of negative prices. If AWEA is going to claim that wind is “market-driven” then AWEA should renounce the PTC, state renewable electricity mandates, and all other forms of subsidies to compete in a real market.

Could the U.S. Eliminate Oil Imports?