President Obama subsidized solar and other renewable energy in the United States with taxpayer money to the tune of $39 billion per year on average for the past 5 years. These massive subsidies, however, have done little to increase the contribution of solar power to the electricity generation mix as solar is expected to produce just 0.6 percent of electricity generation this year.[i] Disregarding the cost to the American taxpayer and the failed solar projects in the United States, President Obama has pledged billions of dollars to fund solar energy development in India. On his trip to India, President Obama was hoping to bring back a deal similar to the one he made in China to peak the country’s carbon dioxide emissions by 2030. However, Prime Minister Narendra Modi rejected the President’s proposed global warming deal, realizing his priority should be to bring power to the hundreds of millions of Indians that lack access to electricity.[ii] India’s Prime Minister knows that it needs all forms of electricity generation, including coal, to accomplish this goal.

Study by the Taxpayers Protection Alliance

The Taxpayers Protection Alliance produced a report highlighting information from various studies on the U.S. subsidization of solar power. Over the last 5 years, taxpayers spent over $150 billion on solar power and other renewable projects, financing grants, subsidizing tax credits, guaranteeing loans, and bailing out failed solar energy companies, according to the Brookings Institute. According to the Government Accountability Office, federal government support for solar energy is massive, with over 345 different federal initiatives covering over 1,500 projects in 20 federal agencies–the Pentagon has 63 solar programs, the highest among the agencies, followed by the Interior Department, with 37 programs and the Energy Department (DOE) with 34 solar programs. For example, DOE’s Sunshot Initiative spends $270 million per year to “induce companies to lower production and installation costs associated with photovoltaic solar panel systems and reducing the price of solar power.” Last month the Energy Department announced an additional $59 million for “solar deployment plans.”[iii]

The 2009 stimulus package provided an estimated $51 billion for renewable energy projects, including funding for failed solar energy companies like Solyndra and Abound Solar. The Obama Administration gave Solyndra a $535 million loan guarantee to manufacture solar panels, but the company had to file for bankruptcy in 2011. Abound Solar received a $400 million federal loan guarantee, but its product was defective, producing only a fraction of its intended wattage, with solar panels catching on fire. It filed for bankruptcy in 2012 after using $70 million in taxpayer-backed loans; the bankruptcy cost taxpayers an estimated $60 million, and cleaning up the toxic solar panels cost an additional $2.2 million. First Solar received over $3 billion in loan guarantees in September 2011. Three months later, First Solar cut over 150 jobs and then followed that with an announcement 3 months later that it was laying off 2,000 additional workers – 30 percent of its workforce – and selling off much of its $3 billion in federal loan guarantees to third parties. The Ivanpah Solar Electric Generating System in California, a concentrated solar thermal plant, received $1.6 billion in subsidies, but produces electricity at a rate of only 25 to 40 percent of original estimates and at a cost three times higher than traditional power. Because electricity production at Ivanpah is lower than expected, resulting in lower than expected revenues, it has requested an additional $539 million of taxpayers’ money from the federal government to pay a portion of the loan that taxpayers funded.

According to the Daily Caller, “the federal government has spent more per year on solar power and other green energy programs in the last five years than it did on securing U.S. embassies. The State Department spent $2.7 billion on “embassy security, construction and maintenance” in 2014—over 14 times less than what the federal government spent on so called “green projects,” and President Obama’s 2016 budget proposal is requesting less for 2016—$2.2 billion.[iv]

The Obama Administration committed $4 billion earlier this year to subsidize solar development in India. The U.S. Trade and Development Agency plans to provide $2 billion in loans for solar energy, the U.S. Overseas Private Investment Corporation is providing $1 billion, and the U.S. Export-Import Bank will provide an additional $1 billion.[v]

As part of Prime Minister Modi’s $160 billion plan to bring green energy to rural Indians who do not have reliable electricity, India is trying to obtain $100 billion in solar energy investments over the next 6 to 7 years, with more than half expected to come from abroad. Modi’s government plans on constructing 100,000 megawatts of solar power capacity and 55,000 megawatts of wind power capacity, and to save 20,000 megawatts of power through energy efficiency mandates.

Critics of Obama’s “gift” to India have found evidence of cronyism in the announced solar subsidies. For example, First Solar, an Arizona-based solar company, is a top contender for getting part of the $1 billion in financing from the Export-Import Bank; its stock soared by 4.1 percent at President Obama’s announcement. As mentioned above, First Solar has benefitted from government subsidies and it has won licenses to build solar energy in India. The company is currently favored to get Export-Import Bank financing.

India, however, is not just building renewable plants. India plans to have 63,000 megawatts of nuclear power capacity on line by 2032 — an almost 14-fold increase on current levels. It currently has 22 nuclear reactors and plans to build 40 more in the next two decades.[vi] India had 114,782 megawatts of coal-fired capacity as of May 31, 2012 with an additional 87,122 megawatts under construction.[vii] Indian Power Minister Goyal sees coal as playing an “essential role” in his $250 billion plan to provide “Power for All” by 2019. According to the International Energy Agency, coal is expected to increase from 43 percent of India’s total energy supply today to 46 percent in 2020 and 51 percent in 2035 and to maintain its 68 percent share of the electricity market as its demand grows.[viii]

According to the Energy Information Administration, India had 249 gigawatts of installed electricity generation capacity connected to its national network in early 2014, with 59 percent being coal-fired. The distribution of its 2014 capacity mix is as follows in the table and graph below. 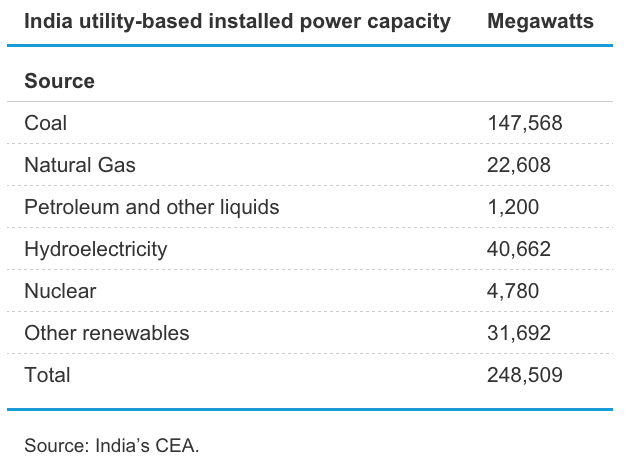 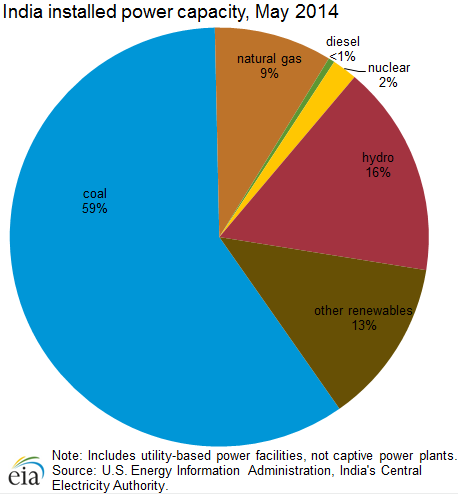 The government’s attempt to support the solar industry by picking winners and losers in the marketplace has failed in many cases, leaving the taxpayer with the cost. Further, the Obama Administration is not only funding solar projects in this country, but also in India despite no agreement coming from India to curb future greenhouse gas emissions. The time has come for solar energy to prove its merits without billions in support from the federal government both here and abroad.

Greatest Threat to the Power Grid: Our Own Government