America’s shale oil boom is a major contributor to the world’s reduced oil prices and our lessened dependence on imported oil despite President Obama saying that we cannot drill our way to lower gas prices. U.S. oil production continues to increase despite lower oil prices and a drilling slowdown—new wells are down 28 percent since June 2014 when oil prices were over $100 per barrel. Despite the reduction in drilling, the amount of new oil pumped from wells drilled in January is estimated at 515,000 barrels per day—just 8.5 percent less than the wells drilled in June 2014.[i]

Booming production resulted in our net petroleum imports in 2014 averaging just 5.2 million barrels per day—down to 27 percent of our total supply needs when they had represented over 60 percent of our needs just 10 years ago. In fact, light oil imports to Gulf Coast States, where our major refinery capacity is located, are virtually zero as those refineries get light oil from shale formations, primarily in Texas and North Dakota. (See chart below.) 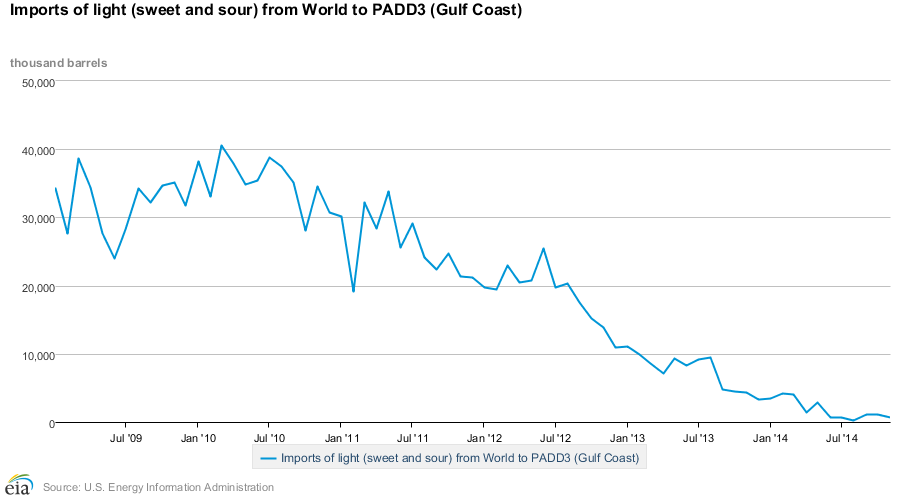 The world’s energy producers are watching the U.S. oil market closely for any sign that American oil companies are producing less crude. Many oil producing countries are anxiously looking for oil production in the United States to decline so that oil prices can regain some of their losses; many of those oil producing countries are having trouble balancing their budgets that are dependent on oil sales and higher oil prices. But, U.S. oil production is expected to continue to increase—just at a slower rate.

The drilling slowdown is not uniform across the United States. In some areas, such as the Eagle Ford Shale in South Texas, the number of new oil wells increased during the months when oil prices fell most steeply–from November to January. The largest decline in new oil wells was in the Permian Basin, in West Texas and New Mexico, where oil companies added 15.6 percent less production capacity in January than in June. Most of the decline was from conventional, vertical wells–not horizontally drilled wells that deliver the biggest volumes of oil and gas. The Bakken formation in North Dakota, the second-largest oil-producing state after Texas, also saw a decline in new well drilling. Some of the drilling downturn in the Bakken and the Permian basins, however, could be the result of severe winter weather.

The International Energy Agency (IEA), the energy arm of the Organization of Economic Cooperation and Development (OECD), expects the North American oil production boom to continue. It expects the United States to produce two out of every five new barrels of oil over the next five years and Canada to produce an additional 800,000 barrels a day over that period despite industry fears regarding lower oil prices. In contrast to the continued increase in U.S. oil production, IEA expects a few years of discomfort for the oil giants in the Persian Gulf, and years of financial problems and political instability in petrostates like Venezuela and Russia.

IEA sees Russia as the major oil producing loser. IEA expects Russian oil output to decline by about half a million barrels a day due to lower oil prices, Western sanctions, and a depreciating currency. Those factors make investment in capacity to maintain oil production at old fields and to begin new projects in the Arctic or offshore, where costs are higher, difficult for Russia. Russia currently produces about 10.5 million barrels per day; IEA expects its oil production to fall by 560,000 barrels a day by 2020, which could cause a broader economic slowdown.[ii]

According to the IEA, OPEC will increase production only about half as much as the United States, with Iraq accounting for nearly all of the projected growth. However, with civil unrest continuing in Iraq, this forecast is very uncertain. Oil production in Libya is also uncertain because the country is torn by political instability and Islamists fighting over control of its oil fields, reducing Libyan oil production to very low levels. Another uncertainty is Iran’s oil exports. If Western countries make a deal with Iran over its nuclear program, the sanctions on Iran’s oil exports could be lifted. If a deal is reached, IEA indicates that over 1 million barrels a day of Iranian oil could be available to global markets, which would cause prices to decline further.

Uncertainties are also on the demand side where efficiency measures have curbed the growth of oil demand in many countries. Surprisingly, in 2014, developing countries outside the OECD consumed more oil than the developed countries in the OECD. In 2015, it is expected that Asia will consume more oil than the Americas, changing the traditional demand patterns.

Given all of these uncertainties, oil prices are very difficult to project. Some oil analysts think oil could decline further to $20 per barrel; others, in OPEC, feel that prices could increase to $200 per barrel.

The President’s Budget and the PTC

Obama Subsidizes U.S. Solar Energy and Promises to Do the Same in India