In his recently proposed budget for Fiscal Year 2016, President Obama includes permanent extensions to the wind Production Tax Credit (PTC) and Investment Tax Credit (ITC) amounting to $31.5 billion over ten years. Coupled with its stated desire to limit carbon dioxide emissions, the Administration is continuing its pattern of punishing energy sources that work while subsidizing those that do not pass the market test.

Background on the PTC and ITC

As I explained in this earlier IER post, going back to at least the 1970s the federal government has been offering tax credits to provide support for wind energy that is “just around the corner.” The modern PTC was established in the Energy Policy Act of 1992. At its inception, the PTC “provided an inflation-adjusted tax credit of 1.5 cents per kilowatt-hour for generation sold from qualifying facilities during the first 10 years of operation.” (Obama’s budget proposes a PTC of 2.3 cents per kWh.) In addition to wind, over the years Congress has extended eligibility to geothermal, certain hydroelectric, “open-loop” biomass, landfill gas, and even marine energy resources.

The status of the PTC was amended by the American Recovery and Reinvestment Act (ARRA) of 2009, more commonly known as the Obama stimulus package. In this legislation the PTC for wind was extended through December 31, 2012 (and through 2013 for other renewables). Alternatively, the ARRA gave project owners the option of receiving a 30% Investment Tax Credit (ITC) rather than (not in addition to) the PTC. Developers can receive the 30% ITC as a cash payment from the Treasury, for projects where construction started before the end of 2011 and that are placed in service before 2013. ARRA also created the section 1603 program which allowed developers to elect to receive cash rebates in lieu of tax credits, but only if construction had begun before the end of 2011.

Despite many decades of support from the federal tax code, wind power is still a niche energy source. The following chart shows the percentage of net electricity power coming from various sources: 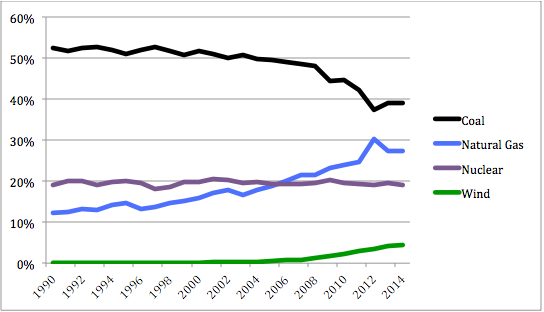 As Figure 1 indicates, despite the massive federal advantages given to wind (and other renewables) during the Obama Administration, it still provides only a small fraction of total U.S. electrical generation. The proponents of wind power readily admit that without continued federal support, even that small fraction would drop off again—this is their chief argument for maintaining the PTC.

Although in general a tax credit should be distinguished from an outright subsidy—because it makes a difference whether the IRS lets a business keep more of its income, versus sending a check drawn on other people’s money—in the case of the PTC and ITC, the distinction becomes fuzzy. For one thing, the Obama proposal would make the tax credits refundable, meaning that they would translate into direct cash from the Treasury if the credit exceeded the actual tax liability. Furthermore, even if the credits weren’t refundable, there are complicated financial games that investors can play, buying stakes in wind operations in order to reduce an outside entity’s tax liability, meaning that the “tax credit” earned by the narrowly-defined wind operation is closer in economic terms to an outright subsidy.

Although the 2.3 cents per kWh PTC might sound like small potatoes, it is quite large in the context of the wind market. As I explained in a previous IER post, the wholesale price for electricity—which is what wind and other producers obviously receive when selling their product—frequently fell in the range of 3 to 5 cents per kWh (in 2012). Thus the PTC could effectively give a utility a bigger subsidy than the actual market price. It would be as if Uncle Sam allowed car dealers to knock off $60,000 from their tax bill for every $50,000 car they sold. Indeed, the PTC is so generous that it can result in negative wholesale electricity prices.

We must not forget that the reason the “tax credit” is so advantageous for wind power is that other energy sources are heavily taxed by the federal government. Indeed, when it comes to coal-fired power plants, producers face direct regulations hampering their operations and causing many to shut down entirely.

If the Obama Administration wants to give tax cuts to spur economic growth and lower energy prices, it would make a lot more sense to reduce marginal rates rather than hand-picking specific energy sources that even its own supporters acknowledge can’t compete on a level playing field. Perhaps decades from now, it will make economic sense to generate large amounts of U.S. electricity from wind, solar, and other renewable sources, but right now these are at best niche sources that can only supplement the workhorses of coal, natural gas, and nuclear. If Washington insists on picking winners and losers in the energy sector, it will hamper economic growth and raise energy prices.